Here’s a good back-and-forth between Charlie Cook and Jonathan Bernstein about Cook’s strong assertions that the White House should have put health care reform in mothballs once it had became clear that the employment picture would turn as bad as it has. I’m a big fan of Charlie’s, generally share in his pessimism about the difficulty of the political environment for the Democrats, and know that this argument isn’t new to him: he’d said the same thing to me as early as August, when I got lunch with him after we’d been on a panel together. But I think Bernstein gets the better of the exchange with this:

Barack Obama ran on health care reform. It wasn’t incidental to his election; it was absolutely essential. Not, to be sure, to the general election campaign, but to his nomination in the first place. Without a firm commitment to health care reform, Barack Obama would have folded his tent immediately after the Iowa caucuses, if he had even managed to make it that far in the first place. Democrats demanded it.

Actually, I’d go a bit further than Bernstein: health care is one of those core issues that gets Democratic base voters to the polls — in the same way that Republicans have palpations about lower taxes — and was an important motivator for the Obama vote in the general election as well as in the primaries (where, in fact, he tended to cede ground to Hillary Clinton on that issue). The 2008 exit poll asked voters about the most important issue behind their vote; although just 9 percent picked health care, those who did went for Obama by a 73-26 margin, adding a net of 4.2 points to his margin of victory over McCain. By contrast, while 63 percent of voters cited the economy, Obama won those voters by only 9 points, adding 5.7 points to his margin — more than health care but not by much. 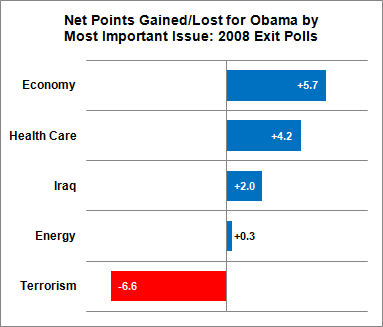 Now, perhaps Obama could have called an audible and tabled health care once the January, February and March employment reports came in as bad as they did and after the Republicans voted almost unanimously against the stimulus and several other popular initatives, which was considered surprising at the time. I’m not quite as convinced as Bernstein that Obama couldn’t have sold the caucus on a wait-and-see approach. But it would have taken a lot of foresight to do so: the decision to proceed aggressively on health care had been made at least by early April, at a time when Obama’s approval rating was about 60 percent and what few polls there were indicated a general desire for reform. The bigger mistake — and I’ve been saying this since at least last June — may have been in giving the Congress so much latitude to craft its policy, which resulted in an extremely protracted process and news cycle after news cycle in which the lead story was Democrats yelling at one another.