Hillary Clinton’s 2008 campaign for the White House first went off course in the cornfields of Iowa, and some liberal groups are hoping to use that staging ground to derail the Democrat in 2016. MoveOn.org, a left-leaning advocacy group and political action committee, is starting Run Warren Run, an effort to draft Sen. Elizabeth Warren into the presidential campaign. Run Warren Run will hold its first rally in Iowa on Wednesday.

A memo to MoveOn: 2016 is not 2008; Clinton is in far better shape now than she was then. Warren, a Massachusetts Democrat, would need Clinton to bleed support in Iowa to have a shot at winning, which is something that didn’t happen in 2008.

Many have argued that the Clinton campaign blew its opportunity in 2008 by squandering a large lead. This may have been true nationally (though vastly overblown), but wasn’t true in Iowa. Clinton either trailed or held a small lead during the lead up to the 2008 Iowa caucuses. We can see this in a local regression plotting Clinton’s, John Edwards’s and Barack Obama’s support in Iowa caucus polls. 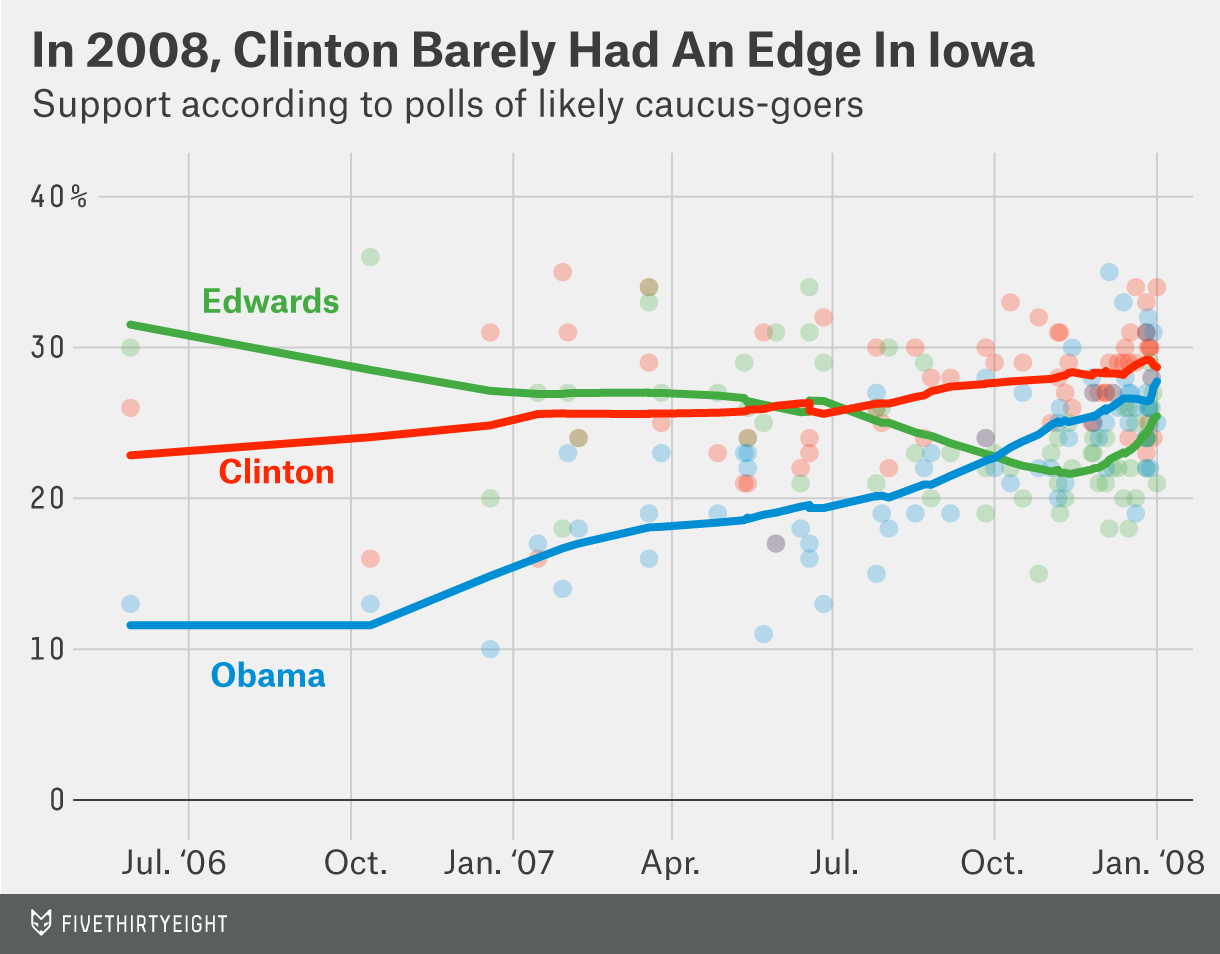 Edwards was ahead in most polling through mid-2007. Even when Clinton overtook him midyear, her advantage was never greater than 5 percentage points. That’s well within the average error for presidential primary polls, and Clinton’s edge was evaporating by the waning days of 2007.

Perhaps as important, Clinton’s support never went above 30 percent. More than 70 percent of Iowa caucus voters wanted someone else. This left the door wide open for Edwards and Obama. By the time the votes were counted, Clinton came in third with 29.5 percent of the vote on caucus night.

That Clinton never held a lead outside the margin of error in Iowa is key in understanding that race. Because of the way presidential primaries are structured, momentum is key. National polls mean little if a candidate does poorly in the early states. Once Clinton lost Iowa, she was in for the fight.

The picture in 2016 is different. Over the past six months, Clinton has had double the support in Iowa than she did in 2008. She’s at 61 percent in the polling average. That matches her strong standing nationally. Warren, on the other hand, is at 12 percent in Iowa. For Warren to win, she’ll have to overcome a 49 percentage-point deficit, compared with the 12-point difference between Clinton and Obama at this point in the 2008 cycle.

As mentioned up top, Warren would need Clinton to lose support. Even if Warren faced Clinton in a one-on-one race (and that is unlikely), Warren’s ceiling would be 39 percent without Clinton faltering.

This isn’t to say that Warren or another Democrat couldn’t beat Clinton in Iowa, but it would require an effort far beyond what occurred in 2008. Clinton’s a heavy favorite in the state that launched Obama.