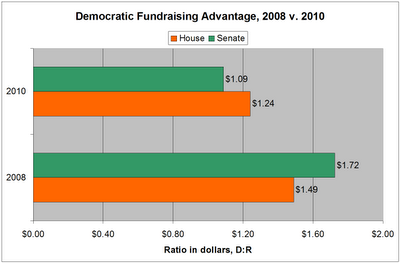 That Democrats have the edge is no real surprise: Generally speaking, the majority party’s Hill committee outraise the minority party’s–a reflection of the fact that most cycles the majority party after the election will remain the same as it was before. In that sense, a significant share, though certainly not all, of the money acts as a bet by various interest groups and trade associations–and particularly those without longstanding fealty or connection to one party or another, like labor unions or chambers of commerce–on which party will be in control of one or both chambers after the election. Of course, there is a self-fulfilling prophecy aspect to this: If contributions tilt toward one party over the other, it has the effect, ceteris paribus, of making that party more competitive and thus more likely to hold or capture that chamber.

That effect aside, if we conceived of fundraising as a bet on the prospect of which party will emerge after every other November as the majority party in the House and/or Senate, the ratio of that spending is somewhat akin to the intrade price for a particular proposition bet. About a year ago I wrote a post speculating as to whether the GOP’s Hill committees–though still in the minority in both chambers–might actually be able to outraise the Democrats in the 2009-10 cycle. There are now almost two full fundraising cycles since the Democrats recaptured Congress in 2006. And although the final figures for 09-10 will not be known for a few months, we are close enough to November to make a preliminary comparison between this cycle and the previous one.

As the figure above shows, Hill committee donors are far more bullish on the Republicans this cycle. The Democrats still hold an overall advantage. But it is smaller for both chambers, and the overall edge for Senate Democrats has shrunk to just $1.09 for every dollar the GOP has raised. (Full data and details from the Center for Responsive Politics for 2009-10 are here; for 2007-08 here.) The bottom line is that the Democrats will probably hold onto their Hill committee fundraising advantages for the remainder of the cycle–but the tilt is not as lopsided as it was last cycle, a reflection of the fact that interest groups in Washington are hedging their bets.