Kyler Murray had a rough start to his NFL career. Facing the Detroit Lions in Week 1, the No. 1 overall draft pick of the Arizona Cardinals threw an ugly interception in the first quarter, was sacked by his own lineman and entered the fourth quarter with a stat line of 9-26 for 70 yards.

But the rookie did not give up when faced with adversity. Down 24-6, Arizona’s hope for the future hit a groove. He led a field-goal drive and then threw two touchdowns to bring the game to overtime. After Murray produced another field-goal drive in the extra period, the Lions marched back to tie the game, but he led a long enough drive to secure a tie for his team. Considering the circumstances, it was not a bad debut for the former Heisman winner.

These days, it seems like every rookie quarterback drafted in the first round enters the NFL ready to play immediately, even if they sit out for a while, as Patrick Mahomes did. But the one thing you can almost guarantee is that once they get the starting job, barring injury, they won’t give it up for a while — at least for the first two years.

The 2019 rookie quarterback status — with the top pick starting out of the gates and a couple others waiting for their chance1 — is fairly typical based on recent history. Since the 2010 draft, 40 percent of first-round quarterbacks (12 of 30) have started Week 1. That’s an increase from 23 percent (six of 26) the previous decade.

But it’s the 2018 quarterback class — the famed five-member first round — that shows a different story. Even though No. 3 pick Sam Darnold was the only Week 1 starter, all five started at least seven games during their rookie seasons, played in at least 122 and started each of the last four weeks. Four of those five were the clear-cut 2019 starters for their respective teams.3 The other was Josh Rosen.

Rosen struggled in 14 games as a rookie on a Cardinals team with a rookie head coach, an offensive line ravaged by injuries and a poor defense. He was ultimately shipped to Miami this offseason, where he has thus far failed to win the starting job and looked overmatched in his brief game action. 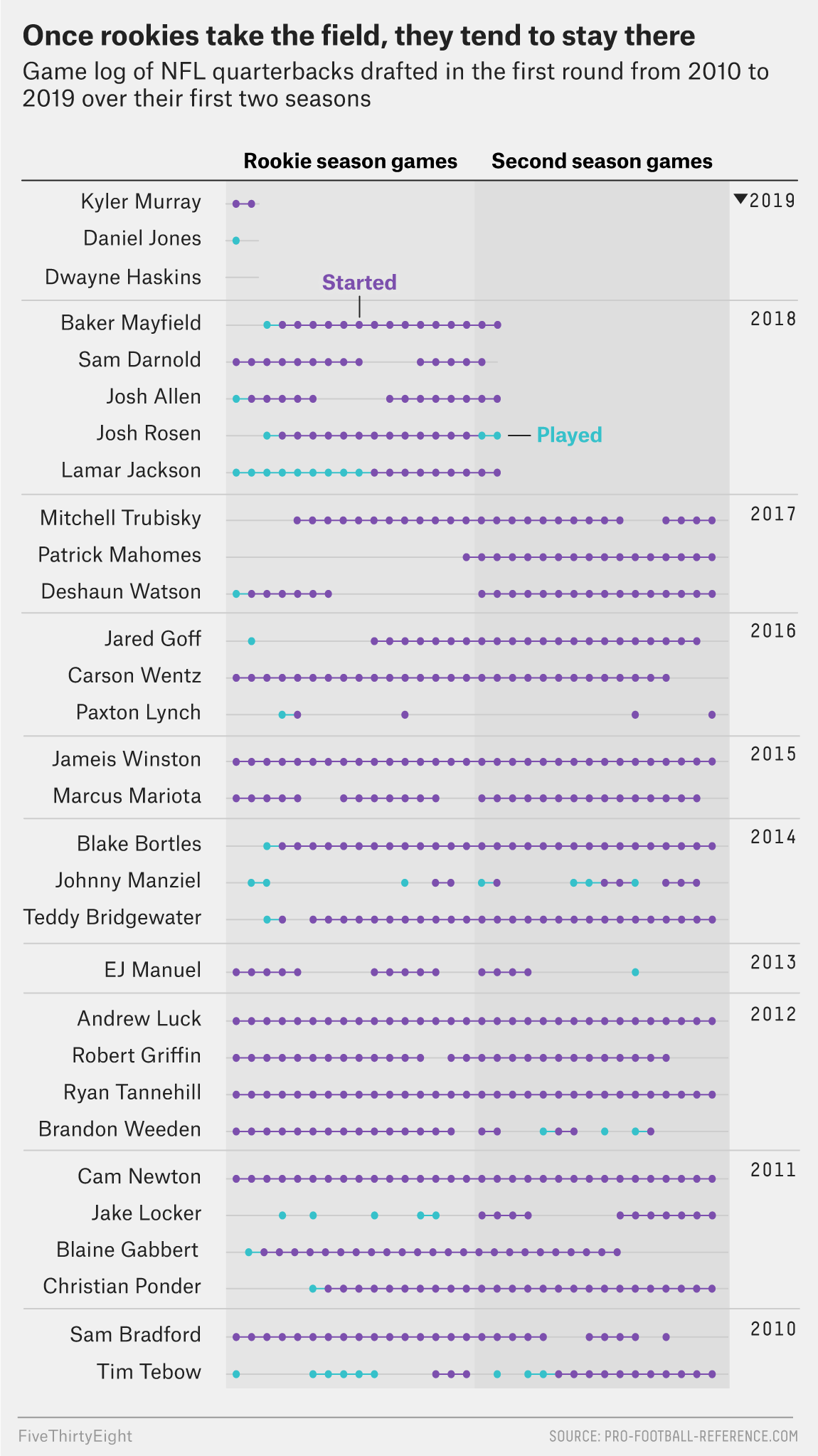 It’s rare for a team these days to move on from a young quarterback so quickly. Of the 22 first-round quarterbacks drafted between 2010 and 2017, only six didn’t start Week 1 of their third year in the league. Two (Carson Wentz and Teddy Bridgewater) would have started if not for injuries. The other four all were picked lower than Rosen, all are currently out of the NFL, and all are now seen as busts.

Brandon Weeden, pick No. 22 in 2012 for the Cleveland Browns, started the first 15 games as a rookie and went 5-10 (which is pretty good by Browns standards). He was replaced by Thad Lewis for the final game after a shoulder injury. In 2013, he began as the Browns’ starter but hurt his thumb in Week 2 by hitting an offensive lineman’s helmet. He was replaced by Brian Hoyer, but an injury to Hoyer in Week 4 put Weeden back as the starter for three more weeks until he was benched for Jason Campbell. He had one more start after Campbell suffered a concussion, but Campbell finished the season. Weeden was cut that offseason at the age of 30, right before the Browns drafted another first-round quarterback…

Johnny Manziel, pick No. 22 in 2014 for the Browns, wasn’t expected to start right away. Behind a surprisingly effective Hoyer, the Browns at one point even led the division. Then, Hoyer went through a three-game stretch of no touchdowns and seven interceptions, and it was Johnny Football’s time to shine. A hamstring injury forced Manziel out of his second start, and rumors spread about his work ethic and lack of professionalism. Manziel started one game early in 2015 but was soon behind Josh McCown, until McCown’s injury gave him another chance in Week 9. After starting the next week, he lost his job after posts surfaced of him partying in Texas, but he got one last chance in Weeks 15 and 16 after McCown was injured a third time and Austin Davis was benched. Manziel famously struggled both on and off the field, and he was out of the league by 2016.

EJ Manuel, pick No. 16 in 2013 for the Buffalo Bills, started on opening day and for five straight weeks before a knee injury, and then he started five more before another knee injury cost him the final two games. He managed to keep his job for 2014, but after a poor performance in Week 4, he was benched for Kyle Orton, who finished the season. In 2015, Manuel lost the starting role to Tyrod Taylor in training camp, though he did make two starts that year when Taylor battled injuries.

Paxton Lynch, pick No. 26 in 2016 for the Denver Broncos, lost the starting job in training camp to second-year starter Trevor Siemian.4 The 6-foot-7 Lynch played in Week 4 and started games 5 and 12 — but only in place of an injured Siemian. The next season, Lynch suffered a shoulder injury in the preseason and again found himself behind Siemian and now Brock Osweiler. He made his third career start in Week 12 after the others flopped, but that went poorly and ended with an injury. He was back once more for the regular-season finale, throwing two touchdowns and two interceptions. The Broncos released Lynch before the 2018 season after he failed to beat out any of Case Keenum, Chad Kelly and Kevin Hogan for a roster spot.

Basically, something has to go very wrong for a quarterback drafted in the first round not to get an extended stint across years as a starting quarterback in the modern NFL, and Rosen is in line to join their company. Rosen has already lost his job once, but he’s slated for another chance; current Miami starter Ryan Fitzpatrick has played every game in a season only three times in his 15-year career.

If Rosen doesn’t get that chance this year, it would be unusual — and would put him alongside names that some fans would rather forget. The question is whether Rosen will ever get a fair chance to prove himself, especially considering the lack of talent around him in Miami. But perhaps Rosen, like Weeden and those before him, had to fail so others could succeed.

Ari Levin was a sports intern for FiveThirtyEight.