One of the things about the so-called Gang of Six — the group of Senators to which Max Baucus issued an exclusive invitation to participate in health care negotiations — is that each one started out the year in a place of seeming electoral invincibility. Baucus, Kent Conrad, Jeff Bingaman, Olympia Snowe, Chuck Grassley and Mike Enzi won re-election with an average of 72 percent of the vote as of their last election, and none had a challenger that came closer than 39 points.

It now appears that, for some of these Senators, it’s a good thing that they managed to bank some goodwill with the voters.

Grassley is the most obvious case. His approval rating in Iowa is down to 57 percent, according to the latest Selzer / Des Moines Register poll. That’s not a bad result — a lot of Senators would kill for that number — but it’s much worse than Grassley is used to, and reflects an 18-point decline since the start of the year: 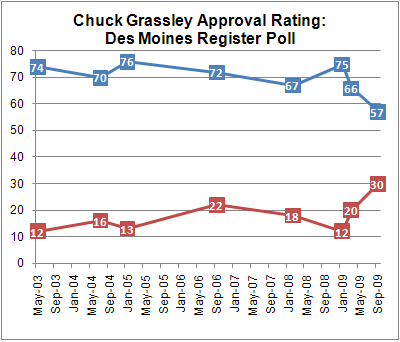 It’s no big secret where the decline is coming from:

Iowa, true to its swing state reputation, is split almost exactly evenly between Democrats (34%), Republicans (33%) and independents (33%). A senator there will get himself in trouble if he pisses off two Democrats for every Republican he wins over — especially if he’s losing support from independents in the process.

Indeed, it’s always been something of a mystery why Grassley is as popular as he’s been. I recognize that there are other dimensions besides ideology that are relevant to evaluating a senator — constituent services, effectiveness in delivering pork, charisma and personal appeal, etc. But Grassley is no moderate — he’s rated, in fact, as the 11th most conservative Republican thus far this year, a position that is fairly typical for him. In any event, his efforts at “bipartisanship” — I’ll go ahead and use the scare quotes because his sincerity can be called into question — have in fact begin to polarize his support.

Grassley is not the only Senator so affected. Snowe’s favorability is down to 54 percent in the latest R2K/Daily Kos poll — a marginal result for a senator used to polling in the 60s and 70s. Baucus’s favorability is now just 50 percent, according to the same poll.

Bingaman, the quietest of the Group of Six, has not seen his numbers much impacted. There is no polling on Enzi and Conrad, although I’d be surprised if the latter hadn’t taken a fairly big hit.

2010, more likely than not, will be a year of some political upheaval. The question is whether that upheaval will be directed at Democrats alone, or rather, incumbents of all stripes. If the former, then Democrats are in for a world of hurt. If the latter, Democrats will still almost certainly lose seats, simply because they have more incumbents running (at least in the House; this is less so in the Senate). But they might be able to knock off a Richard Burr in North Carolina, maybe a Grassley in Iowa (although I wouldn’t place money on that one), possibly someone like a Thad McCotter in MI-11, or maybe a Michelle Bachman or Joe Wilson. There are also an unusually high number of cases in which the Democrats would arguably be better off if the incumbent retired: this is almost certianly true, for instance, for Chris Dodd in Virginia and Jon Corzine in New Jersey, and is arguably so for Arlen Specter in Pennsylvania and Harry Reid in Nevada. The rash of Republican retirements in the Senate, conversely, may prove to be as much a blessing as a curse, although they are undermined by nominating such insider-y, party line candidates as Roy Blunt (the former Majority Whip) in Missouri and Rob Portman (Bush’s former OMB director) in Ohio.