Yes, friends, there is some real news coming out of Washington these days (hint: it has nothing to do with Barack Obama’s bowling score) and Marc Ambinder has it:

This is big news: Democrats have mapped out their legislative strategy for passing health care reform this year. According to George Stephanopoulos, Democrats will work with Republicans to build consensus around a plan, and then, if that doesn’t work, they’ll write the revenue-generating-and-substracting provisions of whatever health care plan they come up with into the FY 2010 budget resolution. As important: the budget reconciliation process, which circumvents moderate Democratic and GOP discontent in the Senate, will NOT be used to set up a carbon emissions credit trading system. Cap-and-trade was always the tougher sell to Congress.

If this is the choice that the White House has made, I’m not surprised, as it’s an instance where the economic logic dictates the political logic. When the economy slows down, two things happen. First, less carbon is emitted. Nobody likes to say this in polite company, but a global economic near-depression is probably the single best “program” one could imagine for curtailing carbon emissions. Vehicle miles traveled are down in the United States in spite of significantly cheaper gas prices; industrial production has slowed; China and India are not increasing their carbon usage as fast as anticipated. This presents one small hedge, at least, against the decline in welfare that is otherwise brought about by an economic crisis.

The second thing that happens is that tackling warming recedes as a concern in the eyes of the public. Whereas almost 60 percent of the public described the environment as a top priority a year or two ago, that number is now down to about 40 percent.

Health care problems, by contrast, tend to worsen in a down economy. The chart below indicates the percentage of Americans covered by private health insurance; recessions are indicated by yellow bars. There has been a secular decline in this number over time because of the graying of the population and other reasons (various government-run programs have made up some of the difference, but hardly all), but the problems have been particularly acute during and immediately after recessions. 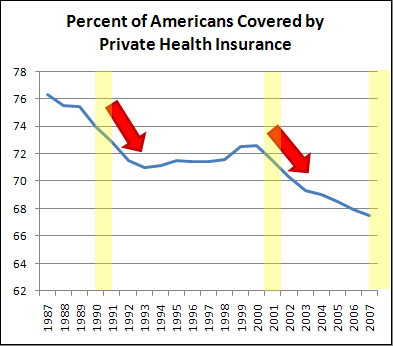 (Note: this chart corrects in a change of accounting methods made in 1999).

For obvious reasons, moreover, a more robust alternative to employer-based health insurance is probably more appealing to Americans when more of them are concerned about losing their jobs. I don’t want to call health care an easy sell … but it’s a fight where the White House ought to be favored.

The risk in putting off cap-and-trade, of course, is that “later” may turn out to mean “never” — and “never” is not an acceptable alternative when we are near so many environmental tipping points. It’s easy enough to imagine a scenario in which the economic recovery is slow in coming, the Dems become skittish about advancing cap-and-trade in an election year (2010), they nevertheless lose a bunch of seats during the midterms, and then Sarah Palin gets elected in 2012 and we’re all burning moose dung and invading Alberta a few years later.