I’d caution against reading too much into the Rasmussen Reports poll today that shows surprisingly tepid support for capitalism. In case you haven’t seen the topline findings, just 53% of the poll’s respondents said that capitalism was the superior economic system, versus 20% for socialism and 27% undecided. The reason for caution is simply because this particular question doesn’t get polled very often, and so there is little basis for comparison. I’m going to proceed on the assumption that this poll represents at least some degradation of capitalism’s standing with the public, but that is just an assumption.

That caveat aside, the key to understanding the results of this poll lies in the (subscriber-only) crosstabs. Here is how support for the two economic systems varies by income level: 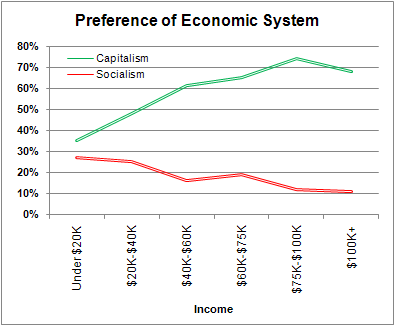 Among Americans making $20,000 a year or less, capitalism leads socialism by only 8 points, 35-27. Confidence in capitalism then rises steadily with income, such that among the wealthiest Americans, it has a 57-point lead on socialism (68-11).

This is not altogether surprising. Nevertheless, it has some potentially profound political implications. The poor, it seems, are having trouble suspending their disbelief. They’re losing faith in the Clintonian restatement of the American Dream, that if they work hard and play by the rules, they can get ahead.

There are pitfalls for both parties given this climate. The Democrats have to worry, on the one hand, about replacing the Republicans in the public’s mind as the party of hedge funds and big business. On the other hand, there may also be risks to activists in misinterpreting these results and overplaying their hand. There is a difference between the working class becoming more acutely skeptical of capitalism, and becoming more sympathetic to the abstraction of socialism; what we’re seeing now is far more the former than the latter. Progressives will probably find their rhetoric more effective it remains firmly rooted in the commonsensical language of fairness, and less in terms of good versus evil or deeply abstract critiques of The System.

The bigger risks, however, are probably for the Republicans. We’re not in What’s the Matter With Kansas anymore: the left’s economic populism has the potential to be an extremely strong counterweight to the right’s cultural populism. The Republicans seem wholly unprepared to deal with it, having put forward a budget that transparently slashes taxes for the rich. If it wants to win elections, the right may need to learn to embrace an authentically compassionate, Huckabeean conservativism, and ditch the Romney-Bush-Boehner variety.