Americans hate their Congress. They hate the long-winded, blowhard speeches, and the parochialism, and the pork-barreling–except, of course, when they like it. As political scientist Richard Fenno once noted, that hatred helps explain why so many candidates–initially as challengers, but even as incumbents–run for Congress by running against it. 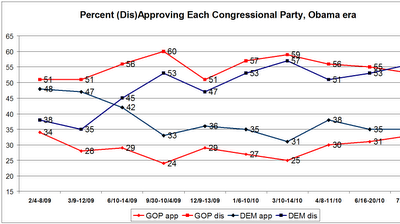 Let’s take each of these in order to see what we might reasonably infer about the implications for November 2.

First, and without muddying the post with two many pre-existing charts, you can see here that, according to Gallup numbers dating back to 1973, as it has for a long time Congress ranks last in terms of citizen confidence in institutions. (Citizen confidence is not identical to approval, of course, but is very similar.) Looking more closely at approval during the past year, you can see here that, again according to Gallup, the congressional approval has been hovering around the abysmal level of 20 percent throughout 2010.

Turning next to approval of the respective parties, the chart I presented at the top of this post above shows the approval and disapproval ratings for each party since President Obama took office, as reported by the Pew Research/National Journal Congressional Connection Poll and tracked by PollingReport.com for the Democrats and Republicans. It confirms that, indeed, the Democrats in just 18 months have blown a net +10 congressional approval rating, turning it into roughly a 20-point net disapproval rating. The key moment of inversion came in late spring 2009, in the wake of the passage of the stimulus bill and at the outset of sometimes nasty debates on Capitol Hill (and back home in those town halls) about health care reform. The only good news for Democrats is that they’ve fallen to the depths Republicans have been wallowing at for some time–again, with about net 20-point disapproval score.

So, we can reasonably conclude that the early 2009 high hopes for Congress, no doubt boosted by the high approval ratings and excitement or hope that attended the start of the Obama presidency, have been dashed. Overall congressional approval has turned south, largely because voters now feel about as positively (or rather, negatively) as they do the Republicans. To Americans, the nation’s least trusted and least liked political institution has returned to its earthly, dismal levels of scorn and disappointment.

What does all this mean for November? There are (at least) three possibilities to consider:

1. The Democrats are in serious trouble. This is the conventional wisdom, and there is ample reason to subscribe to it. Yes, the GOP’s approval numbers stink, but hey, they’re not in charge of anything. Their low approval means nothing because the Dems are running the show and their heads are on the electoral chopping block this autumn.

2. The Democrats are in some trouble, sure–but less than people think. Here the logic goes something like this: “The voters are disgusted with the Democrats, but that doesn’t mean they like or trust the GOP to do any better. This wasn’t the change they were looking for, but they know the change back to what came before is definitely not what they are looking to return to.” This is the current political meme being spread by the White House and other national Democrats, a more sophisticated version of saying, “Yup, we suck but they really suck.”

3. These congressional approval numbers are meaningless. One can reach this conclusion not only because both parties are suffering the same, 20-point net negative approval, but simply because approval for the Congress is distended from how people will vote on a district-by-district, state-by-state basis. The strongest piece of evidence here is this: If you think the public’s view of Congress as a whole is bad now, according to Gallup it was basically the same this time in 2008 when Democrats also controlled both chambers and still picked up seats, not to mention it was higher still in 2006 right before the Republicans had their majorities erased by voters. The counter argument to this is that Democrats, though running Congress two years ago, still had George W. Bush to contend with, so they were not being held responsible for governmental failures then in the way they are now…which more or less brings us back to point #1.

I’m not a polling expert (would love to hear Nate weigh in on this), but I suspect that in this postmodern era of hyper-partisanship these approval numbers, collectively for Congress as an institution or separately for each party, matter less than how voters feel about the president–and how they then express their pleasure or displeasure during midterms toward the one set of national elites they have available to reward or punish via the ballot: members of Congress.