“This is really big,” Commissioner Bud Selig said at the time.

Selig and other MLB officials made positive predictions about the benefits of expanded replay, promising it wouldn’t “disturb the game.” Also, managers would have power over calls, and bad calls would be made right. Finally, officials suggested an increased strategic component to the game: As with calling in a reliever or sending up a pinch hitter, managers would now have one more in-game decision to make.1

However, not everyone has been quick to support the changes. “I don’t care about the getting it right,” Mets fan Jerry Seinfeld told ESPN recently.

And The New Yorker has waffled on the issue, first declaring it an exciting addition to the sport, then lamenting the loss of baseball’s “human element”: the futile, frustrated managerial tirade.

So, with the 2014 regular season winding down, has expanded replay indeed been “big,” as Selig said? Or have the detractors had a point?

First, a primer on the basics of the new rules: Managers get one challenge per game. If they use it and the challenged call is overturned, they get one more. In the seventh inning and onward, umpires (specifically, the crew chiefs) themselves may initiate challenges, at the request of a manager or otherwise — but only if the manager in question does not have a challenge remaining.2 The replay reviews are undertaken by a separate officiating crew in New York.

As of Sept. 7, there had been 1,130 challenges. Of these, 529 (or 47 percent) resulted in a call being overturned. (This is all according to data compiled by the baseball stats site Retrosheet.) Managers initiated 83 percent of the challenges, umpires 17 percent.3

Starting there, let’s examine some of Selig’s predictions. First, has the game been disturbed? If by “disturbed” we mean that replays have disturbed the pace of play, and lengthened games, the answer is no.

An ever-present concern with replay in any sport is that it will slow the flow of the game. Totaled up, the challenges this year have taken about 2,031 minutes — over 1.4 days. This sounds long, but the average challenge takes only about 1 minute and 48 seconds. And there have been only 0.48 challenges per game on average — just slightly less than one every other game. So, all else equal, expanded replay challenges add less than a minute to any given game (about 52 seconds, to be precise).

Here’s how long challenges tended to take, in minutes: 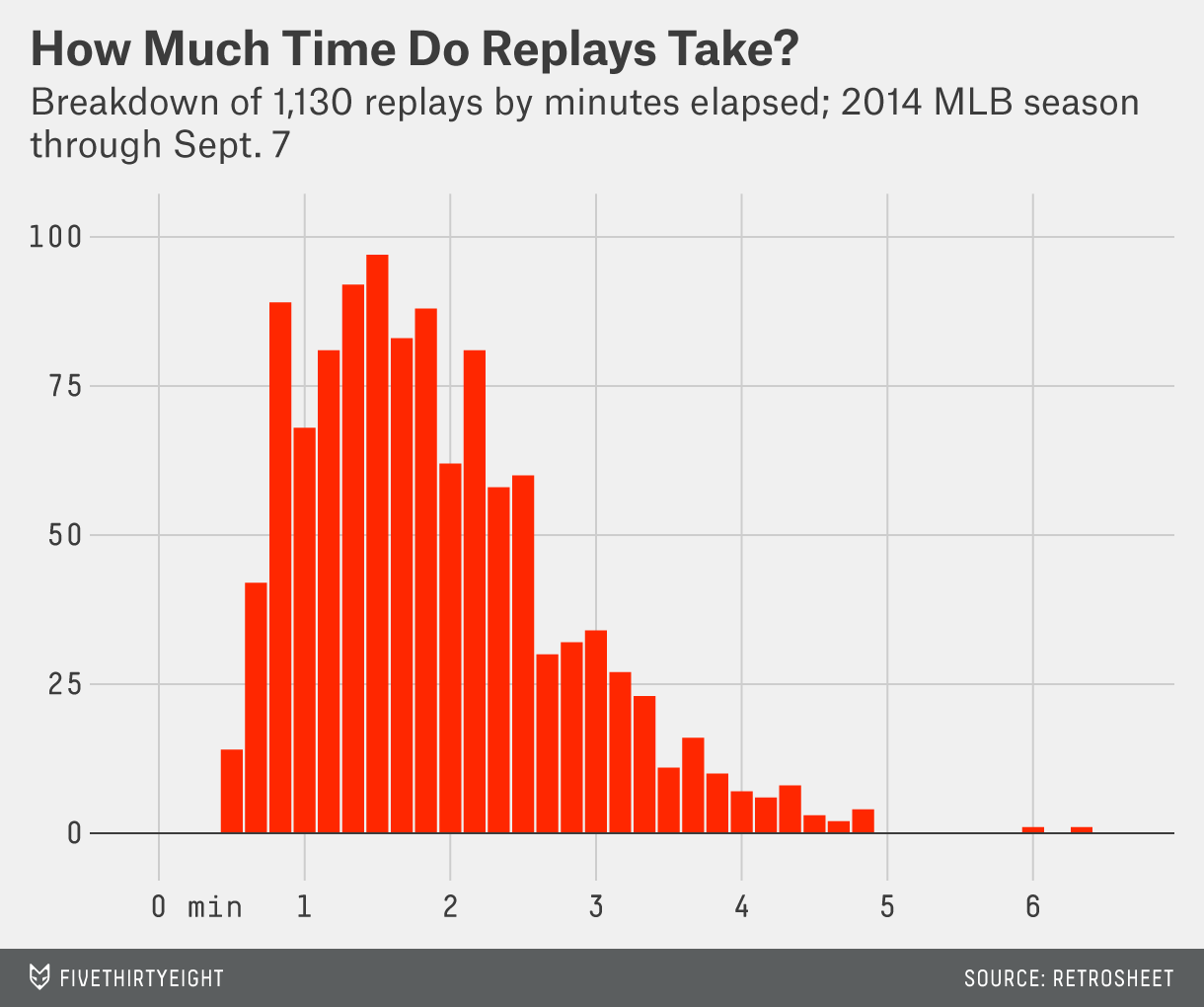 Also, there may be a good argument that challenges can actually shorten games by eliminating lengthy arguments born of a manager’s frustration — although certain commentators have made romantic arguments for these outbursts.4

Second, have managers had more power over calls, and have wrong calls been overturned as a result? The first part is clearly true. For all the dirt kicked on umpires’ shoes before replay expansion, managers had approximately zero influence over the calls themselves. Now, they can explicitly request a video review of a call. The second is clearly true as well. With the video technology present at major league games these days, few challenged calls could go uncorrected, so the average quality of calls must necessarily increase. If the trends so far observed this season continue, about three calls every baseball game day — for which the baseball gods would have been forever cursed by some team’s fans — climb out of the abyss of the blown and enter the realm of the correct.

But the power various managers have chosen to wield has varied dramatically. Here are the calls challenged versus the percentage of the time those calls were overturned (the “success” percentage) for each manager. 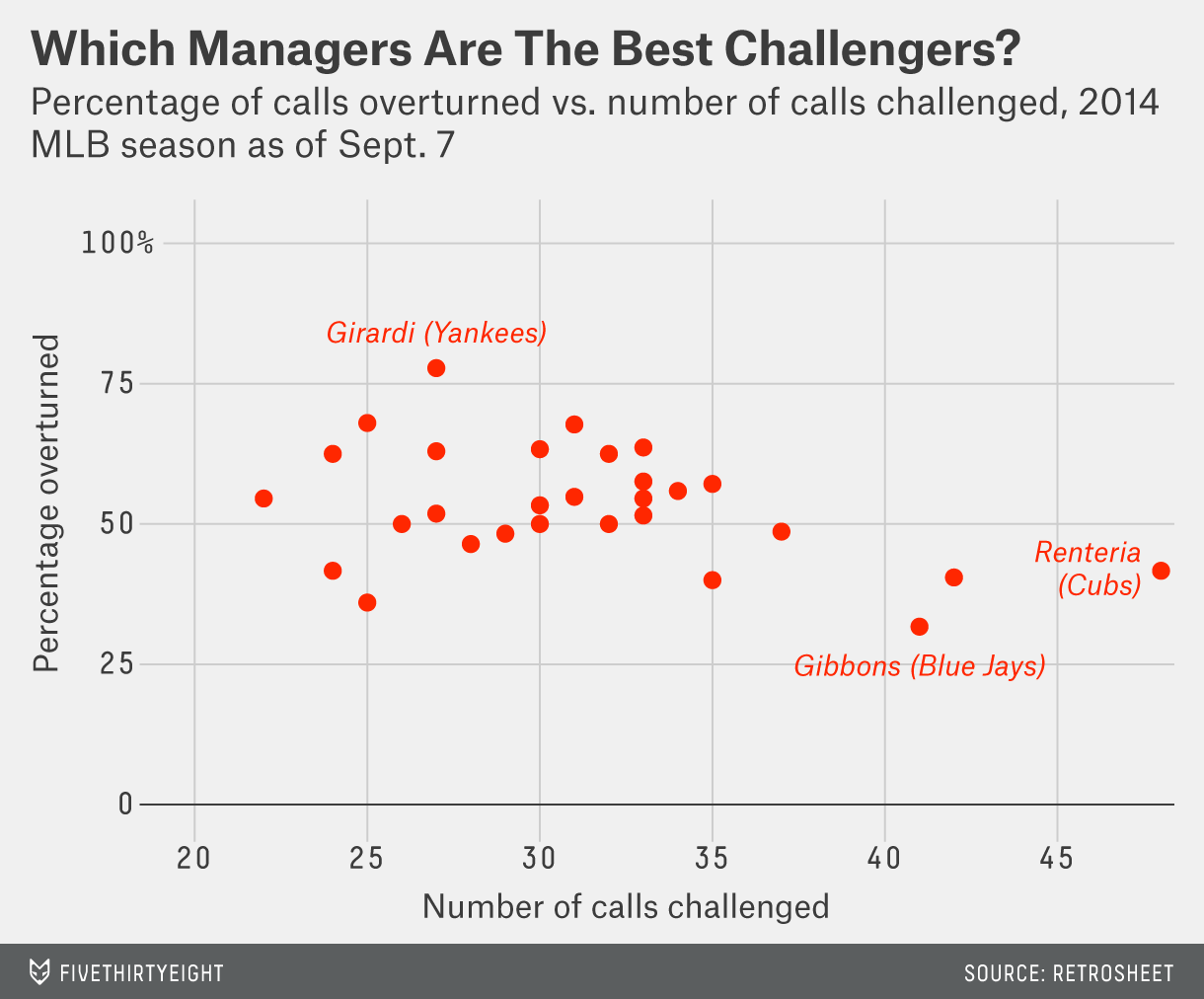 What is getting challenged? Unsurprisingly, it’s the things that happen a lot. The most commonly challenged are the bread-and-butter, out-or-safe force and tag calls. (This includes calls at first base as force plays.) Here are the types of calls that were challenged, and how often each was overturned. (Calls may also either simply stand in the absence of conclusive video evidence, or be decisively confirmed, if such evidence exists.) 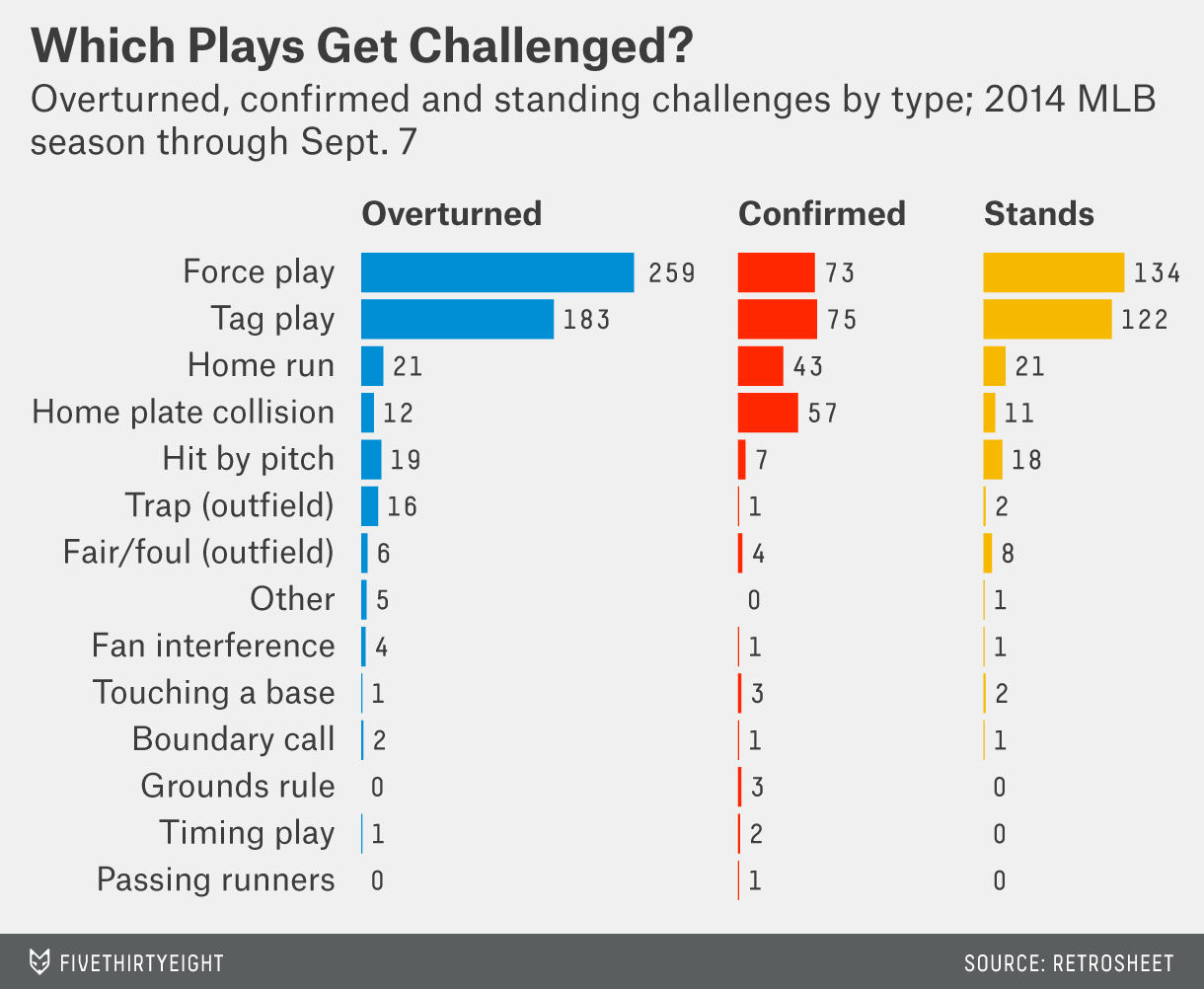 And what of the poor, unsung umpires? Here is the same information, but by umpire who was challenged by a manager. In this case, the percentage overturned is a “failure” percentage, since it is for the umpire. 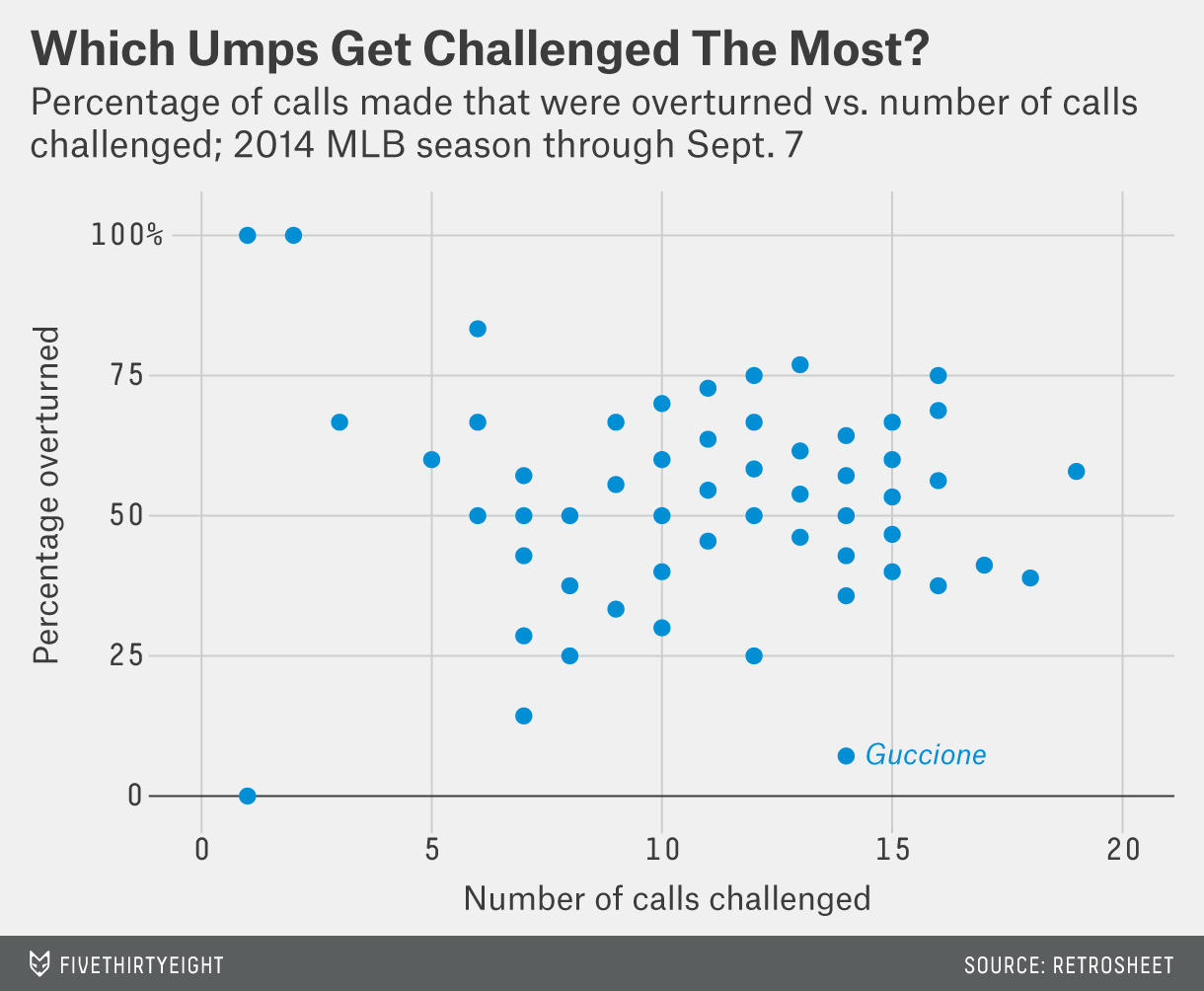 There is a noticeable outlying umpire here: Chris “Eagle Eye” Guccione. Guccione was challenged by managers a higher-than-average 14 times this season, but only one of these calls was overturned. By contrast, for example, Gary Cederstrom was challenged 16 times, and had 12 of his calls overturned.

Third, and finally, what of the additional strategic element? This may be the most interesting prediction, but also the hardest to decipher.

On average, managers overall used challenges just slightly less than once every other game. Therefore, the average individual manager used a challenge about once every fourth game. At first blush, this number seems low. After all, there is very little cost to misusing a challenge (i.e. challenging a correct call). You lose only the challenge itself, and you have insurance: The umps can challenge for you in the seventh inning and onward.

Why might we be seeing so few challenges? Some possibilities come to mind. One, the umpires are really good to begin with, and few plays need to be considered for a challenge. (Given the above chart, and the fact that umpires’ calls are overturned only half the time in the highly selected sample of challenged calls, this is probably true to a large degree.) Two, the managers are bad at using challenges, and are under-challenging. Three, the observed level of challenging is actually close to the optimal level — perhaps it’s best to save the challenge for a potentially high-leverage blown call, which often never comes. (Given what follows, I think the second point is probably truer than the third.) Four, subtler, baseball-cultural incentives may be at work — perhaps managers are hesitant to challenge a single call of an umpire who will be calling balls and strikes for the rest of the game.

To start to get a grip on the answers, let’s consider another question: Is there systematic variation in when in the game managers use their challenges? It appears there is in fact a tendency for managers to challenge more in the later innings. Challenges in the eighth inning are almost twice as frequent as challenges in the second, for example. Here are the manager-initiated challenges by inning. 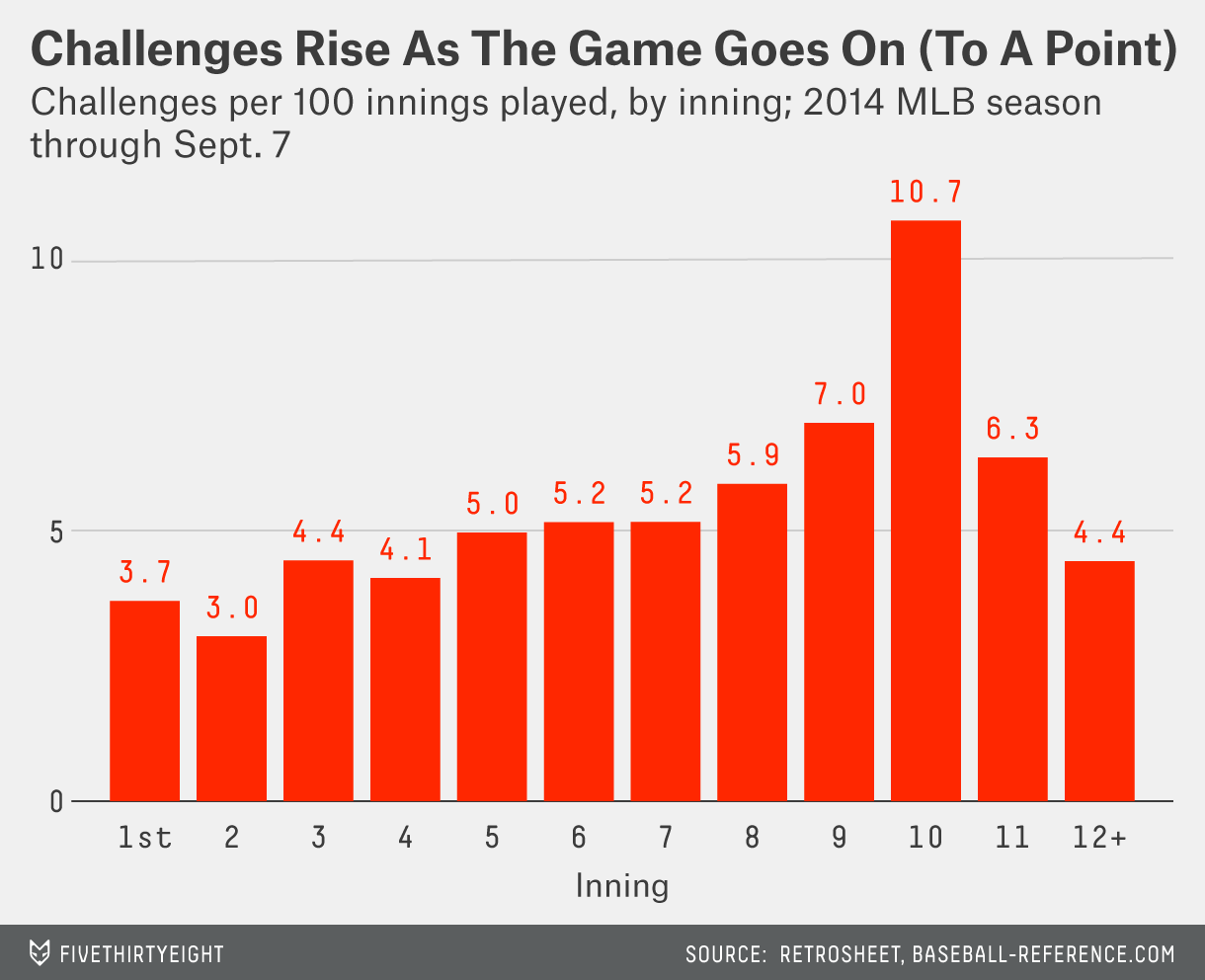 This makes some sense, strategically. A baseball challenge is something akin to an American-style financial option. Each has an expiration date (in this case, the end of the game) and a manager has the right to exercise his option to challenge after any play before the game is over. The value of the “asset” underlying the option is the importance of the play in question. As the end of the game draws nearer, it is optimal to exercise it (to challenge a call) on a broader set of plays, since there are fewer plays left to come in the game. (E.g. If you’re losing, you might as well always challenge the game-ending call, in theory, since you have nothing to lose.)

However, the expiration date of the option is probably more accurately interpreted as the end of the sixth inning. As mentioned before, from the seventh inning on, managers have something of an insurance policy — umpires can challenge their own calls even if a manager is out of challenges. Having the option to challenge is clearly worth less after the sixth inning. Therefore, if managers were behaving optimally, you’d expect to see a spike in challenges around the sixth inning, not the eighth or ninth. Since this isn’t observed in the data, this suggests managers are underusing challenges, especially in the middle innings.

The challenge success rate for managers also diminishes as the game goes on, as shown here: 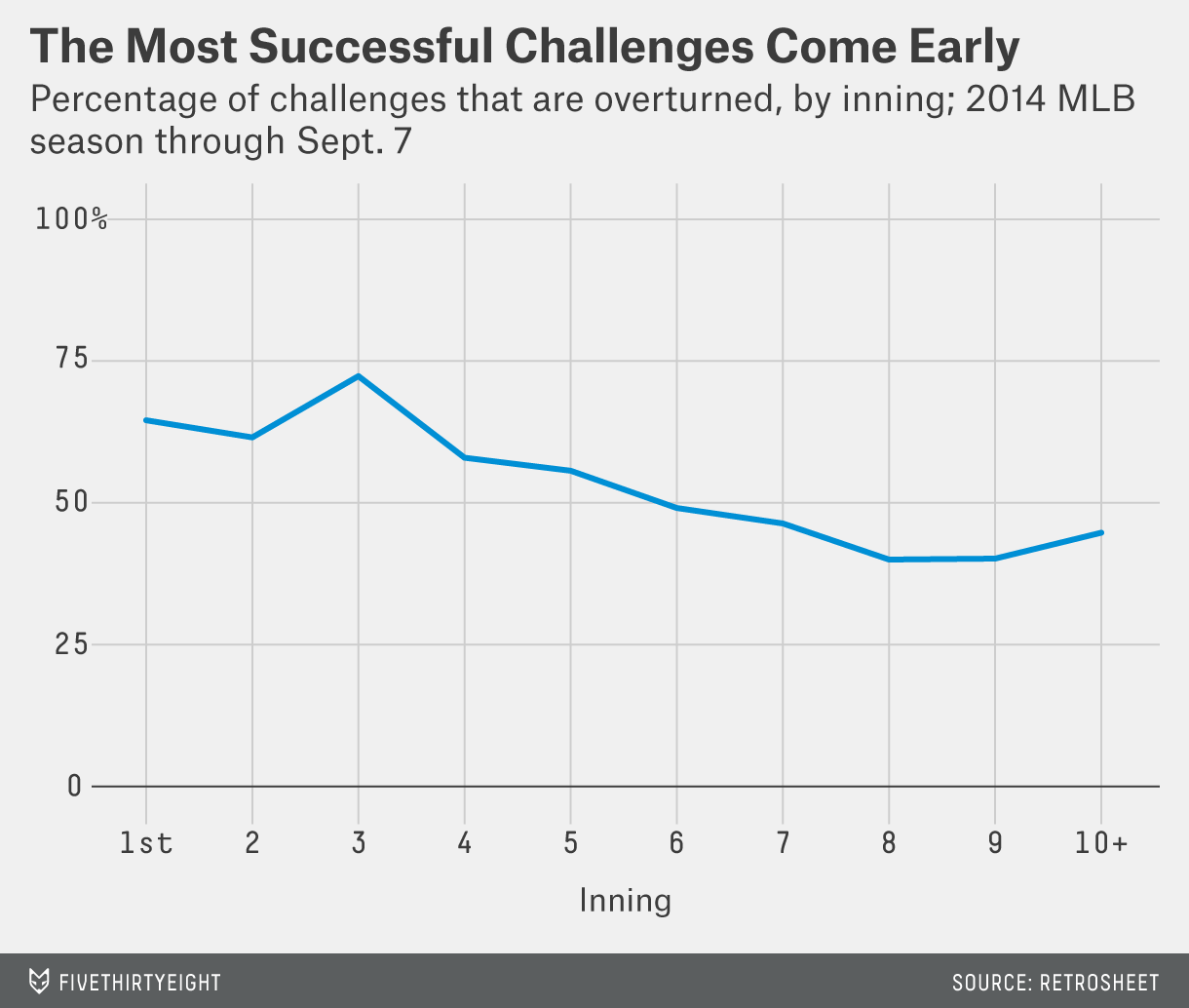 The question of culture is tougher to answer. It may well be that managers are hesitant to challenge an umpire, especially in such a formal capacity. After all, that umpire may be calling balls and strikes in games for the rest of the manager’s career. The unwritten rules of replay haven’t been “unwritten” yet. And it is certainly true that managers and umpires play an intricate repeated game with one another, one that may not have reached equilibrium.

But baseball is a survivor — it evolves. And expanded replay will be accommodated. Arguments against replay are largely aesthetic. Largely gone may be the dirt-tossing, hat-throwing and even base-heaving. But if a few calls are resurrected from the graveyard of the specious, for the low, low price of a under a minute per game — who can argue with that?