Well, Tiger’s back at Augusta. Crowds yesterday seemed to be generally pleasant and welcoming toward him, if perhaps a bit reserved. Other than an overhead plane with a sarcastic, sexual-themed message banner, there was no heckling. And Woods did pretty well: His 4-under yesterday was his best ever opening round at the Masters.

Also doing well after 18 holes are a bunch of old timers, including former Masters winners Bernard Langer, Sandy Lyle, Tom Watson and Fred Couples, who finished yesterday at -1, -3, -5 and -6, respectively. That 66 for “Boom Boom” Couples–one of my favorite golfers and the ’92 champ–puts him alone atop the leaderboard going into the second round; it was also the lowest round of his entire Masters’ career. Couples, by the way, is 50. 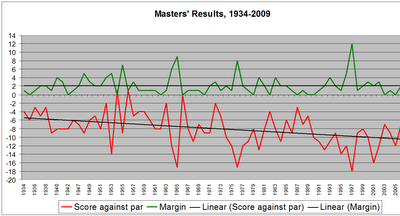 And that made me wonder: Is the Masters getting easier? Despite the lengthening and toughening of the course over the years, the scores do seem, at first glance, to be trending lower.

This difference could, of course, could be attributable to aberrant yet outstanding performances by just the winners over the past few decades, despite overall scoring for the entire field remaining constant or perhaps even falling. Without collecting every score for every player over 73 tourneys, which I don’t have time to do–and absent any resource that I can find which provides field-wide average scores against par–I can’t say for sure. And, on a related note, I also want to vent about this horribly small-fonted “Records and Statistics” page at the Masters official site, which is annoying and of little help. (Hullo, somebody needs to fix their website!)

What we do have, conveniently assembled thanks to Wikipedia, are the winner’s score and the winner’s margin over the next closest finisher(s). And while winner’s scores against par have improved, the average margin of victory (2.1 strokes over 73 tourneys so far) has not changed at all during this period: Notice that there is no slope to top trend line, which tracks the margin by which the winner won through four rounds. (N.B.: For tourneys that went to a playoff–which means two or more players were tied after four rounds–I coded the margin 0; of course, the eventual winner in the playoff had to win by at least a stroke, but what matters is the 72-hole margin, if any.)

So, both the winning scores are going down and the margins between the winner and the first runner(s)-up hasn’t budged, which means the scores of runner(s)-ups are going down in order to keep pace. Of course, these two data points can only account for the performances at the very top of the leaderboard. But there is another statistic to consider–this one courtesy of that almost-impossible-to-read Records & Stats page at the Masters official site–which is the percentage of players who make the cut each year.

For the non-golf fan, players are allowed to play the final two days only if they are within 10 strokes of the leader. That said, if leaders (at least after two days’ play) in recent decades are simply unusually above-the-rest-of-the-field scorers despite an otherwise consistent or worse-scoring field of remaining entrants, then a smaller and smaller share of players should be making the cut over time because of the distance leaders are putting between themselves and the remainder of the field. 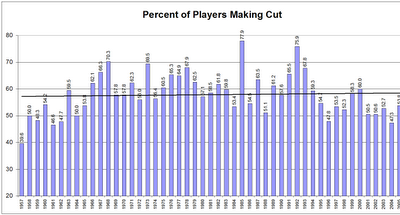 In sum, the winner’s score against par is going down, yet the scores of the runners-up are keeping pace since there’s no rise in the four-round margin of victory, and the rest of the field is also keeping up because the share of all players making the cut has held steady. This, by the way, is despite the fact that over time there ought to be more really low scores thanks to the lifetime exemption rule which allows any Masters winner to play–which is why Arnold Palmer and Jack Nicklaus can tee off every year, no matter whether they were otherwise qualified or competitive enough to make the field based on their skill level today. (I actually love this rule, as I suspect many fans do–and hey, you can bet Watson and Couples do, too.)

So, what explains the fact that Augusta seems more beatable today than in the past? Two answers come immediately to mind. One, of course, is that equipment advances in clubs and balls allow players to drive farther and more accurately today. But the second may simply be the quality of the available pool, driven as that is by the globalization of golf. My evidence on the latter count is pretty straightforward and, I think, compelling: Of the 37 winners from 1973 until last year, 17 were non-Americans, but in the first 36 years of competition, only ONE was not an American (South African Gary Player, 1961).

As the global appeal and thus quality of the global pool of players has expanded, Augusta, like other courses, has had to bend a bit from an assault of greater quality.