Continuing a series of posts handicapping the 2010 elections one year out—made some general observations here, did some House handicapping here—I’ll turn next to governors races, the vast majority of which are held in midterm cycles. The added significance of the 2010 midterm is that the winners in most states will have a role in the drawing of state legislative and/or US House districts for the coming decade. For all of the focus on Congress, there’s a lot on the line in the battle for statehouses. 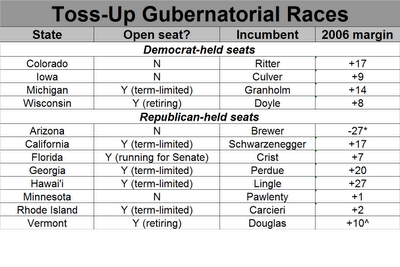 Again, I’ll start with the Cook Political Report’s Jennifer Duffy, who covers gubernatorial races and US Senate races and was on hand to talk about both during CPR’s recent political briefing. “I think being governor right now is the worst job in American politics,” said Duffy, for openers, citing budget deficits, layoffs, and furloughs governors and state legislatures are having to make in the face of declining revenues. Duffy said the environment in state capitals is so bad it is probably no coincidence that retreads are surfacing, including four former governors–Jerry Brown in California, Roy Barnes in Georgia, Terry Branstad in Iowa, John Kitzhaber in Oregon, and possibly a fifth, Maryland’s Bob Ehrlich–running for their old seats. (I discussed the possibility of an Ehrlich candidacy in my Baltimore Sun column last week.)

Duffy pointed out that 20 of the 37 races slated for next year are open-seat contests–10 for each party–and Duffy thinks there could be more. Her final, general observation was that, looking at the current partisan control of statehouses, “you realize how many seats each party had that didn’t really belong to them” from the standpoint of partisan expecations and presidential behavior of those states. “There’s going to be a lot of [party] trading” in 2010, she predicts. Overall, in terms of net gains, she hinted that Republicans could have the edge, saying that about four out of every five times she has made a rating adjustment it has been to move a seat from a more probable Democratic position to a less probable one (e.g., from leaning Democratic to toss-up, or from toss-up Republican to Republican leaning).

Looking at the table I created above of Duffy’s toss-up races–they are her rankings as of 12 days ago; the only part I added was last column, showing the 2006 gubernatorial results–what can we say about these races?

Well, to begin, it would appear that the Democrats have fewer seats in toss-up races. But what this chart does not show are the four state races Duffy rates as either “Republican leaning” (OK, TN, WY) or “Republican likely” (KS) which Democrats currently occupy; she has no such solid/likely/leaning Democratic forecasts of Republican-occupied seats. And it remains to be seen whether having two incumbents running in those four Democratic-held toss-ups is an advantage or disadvantage. A poll out this week has bad news for Iowa’s Chet Culver, trailing Branstad by a whopping 24 points. Ritter’s approval-disapproval ratings are about even, and an August poll showed him either tied or trailing possible GOP nominees Josh Penry and Scott McInnis.

Meanwhile, the downside for Republicans is that they have a lot of currently-held open seats for which they strong candidates and some of these are in Democratic-leaning states like California, Hawai’i, Rhode Island and Vermont. The most compelling race may be in Minnesota, however, where Tim Pawlenty won narrowly four years ago and might be distracted by presidential politics. Losing re-election would scotch any White House ambitions he has, making him a ripe target for the Democratic Governors Association. And that made me think that maybe–just maybe–Sarah Palin knew what she was doing by getting herself safely out of the way of anti-incumbent fury that may dominate the 2010 cycle.

*AZ Republican Jan Brewer is seeking re-election, though she was of course appointed to fill the seat won in 2006 by Democrat Janet Napolitano, which is why the margin in negative (for Republicans, that is).
^Douglas’ margin in Vermont, which has two-year terms, is from 2008. Because an Independent and Democrat split the non-Douglas vote, to provide a more useful result I summed their vote shares and subtracted it from Douglas’ 53 percent winning total.