The earthquake that struck the Carribbean nation of Haiti last evening has brought rapid and significant attention to the impoverished and conflict-affected country. With more than 10 million people and land area slightly smaller than Belgium (or about the same as Massachusetts), Haiti has long been the poster case for the vicious circle of colonial and foreign intervention, poverty, violence and political instability.

In the case of Haiti, however, natural disasters, along with environmental and agricultural overuse and degradation, have exacerbated the earlier trends to create an even more devastating situation of both political and environmental instability. In addition to relatively rare major earthquakes, each summer about seven to ten tropical storms crop up in the south Atlantic, with a few turning into hurricanes. Invariably, at least a few hit the island of Hispaniola, and batter the Haitian people.

Located just 50 miles east of Cuba and 700 miles southeast of Miami, Haiti has long been within the sphere of influence of the United States. As such, the United States has played a highly influential role in the modern history of Haiti, which continues to this day.

Following colonial exploitation of the island for gold, sugar, tobacco and coffee production by successive waves of Europeans, Haiti became an independent nation following the Haitian Revolution in 1793. Throughout the following period, however, the business interests of the global and regional powers at the time, namely French, English, American and German merchants and commodity sellers, dominated the political and economic scene.

While an early sandbox for European expansionism, once the rise of the United States as a global power was complete at the turn of the 20th century, the Americans were the major foreign player in the country. In 1888, US Marines landed to “protect American lives and property,” as explained by Marine Historian Edwin Simmons, beginning several decades of off-and-on military operations. U.S. military interventions in Haiti came to head in July 1915, when President Woodrow Wilson ordered several hundred U.S. Marines to invade and hold the capital Port-au-Prince, in what became a 20 year occupation of the country.

While the US Government, through its governing advisors, had the final decision about all policies that were made during that period, the U.S. did not want to be portrayed as a colonial power. Indeed, the American leadership left the Haitian parliament in function and treated all Haitians –many of the elites were of mixed black and white heritage and used to preferential treatment from European colonialists– with an equal measure of racial distaste.

Nonetheless, many have argued that economic interests, such as perceived threats to the Haitian-American Sugar Company (HASCO) by the Haitian government that came to power in early 1915, drove the intervention and occupation.

It was not until the “Good Neighbor” policy of the F.D. Roosevelt administration of the early 1930s when U.S. military and administrative forces were removed from the country, with power turned over in 1934.

Today, the U.S. remains the largest trade destination for Haitian goods (more than 70 percent of exports), while imports from the United States (34 percent) are even higher than Haiti’s next door neighbor, the Dominican Republic (23 percent). U.S. official aid to the country is quite significant (USD 260 million according to OECD DAC), though quite variable, with large spikes during Operation Uphold Democracy in 1994 and 1995, and a tripling of aid from 2004 to 2008, after the 2004 coup that threw President Jean-Bertrand Aristide out of power for the last time. 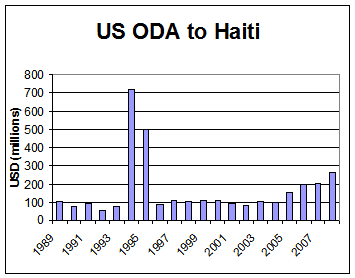 Yesterday’s earthquake opens the door to some obvious questions for the Obama administration, who have pledged to make major changes in U.S. policy towards neighbors in the Western Hemisphere. As discussed this summer, Obama stated in an April speech that, “while the United States has done much to promote peace and prosperity in the hemisphere, we have at times been disengaged, and at times we sought to dictate our terms. But I pledge to you that we seek an equal partnership.”

The key question will be if that partnership for Haiti entails simply a year or two of above-average food-aid and reconstruction assistance, then a drop off the radar screen until the next hurricane, coup or food shortage, or instead something that more fundamentally changes the equation.

For example, what is to be done about the American and European agricultural subsidies that make farming in Haiti (among most of the developing world) economically infeasible for so many? And as well, how will the devastated natural environment, including degraded land and polluted water and air, be revitalized to support a sustainable society, economy and government?

These are the key elements of soft power and “equal partnership.” And it is yet to be seen if the Obama administration seeks to make a true break from the past, or prefers to ignore it, portending decades more of the same cycle of poverty, conflict and political chaos.
—
Renard Sexton is FiveThirtyEight’s international affairs columnist and is based in Geneva, Switzerland. He can be contacted at sexton538@gmail.com