Here is the problem with using the results from New Jersey or Virginia tonight to judge the status of the national political environment. It’s not so much that the races are “meaningless” in the abstract, but that ticket-splitting is so common in gubernatorial races that the noise swamps the signal.

Of the eleven states with a PVI of D+7 or bluer, five (Hawaii, Vermont, Rhode Island, California and Connecticut) currently have a Republican governor. Of the ten states with a PVI of R+10 or redder, meanwhile, four (Kentucky, Kansas, Oklahoma, Wyoming) have a Republican governor. The correlation between gubernatorial elections and elections to the House, Senate and Presidency has been very weak, at least recently. In fact, if you compare the share of the vote that the Democratic candidate got in the most recent gubernatorial election in each state to the share that Barack Obama got last November, it is almost literally zero: 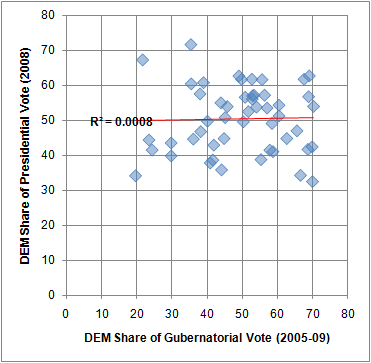 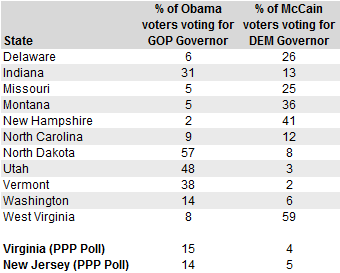 As you can see, the percentages vary radically from state to state. In North Dakota, 57 percent of Obama’s voters voted Republican for governor, in Utah 48 percent, and in Vermont, 38 percent. Meanwhile, in West Virginia, 59 percent of McCain’s voters went with a Democrat for governor, 41 percent in New Hampshire, and 36 percent in Montana. On average, about 22 percent of voters for both candidates split their gubernatorial and Presidential ticket in these states. This compares with 8 percent of Obama voters who voted for a Republican for the U.S. House, and 12 percent of McCain voters who voted Democratic for the House. Ticket splitting is about twice as common in gubernatorial races as in races for the Congress.

Public Policy Polling thinks that, in both New Jersey and Virginia, about 15 percent of Obama voters (the ones who bother to turn out) will vote Republican for governor, whereas about 5 percent of McCain voters will vote Democratic for governor. Those percentages, coupled with depressed turnout among their base, will almost certainly cost the Democrats Virginia and possibly New Jersey. But they’re also well within the range of “normal” given the local circumstances intrinsic to gubernatorial campaigns — similar, for instance, to what happened in Washington State last year.

To be clear, the fact that gubernatorial races are not a reliable benchmark does not mean the Democrats are not in trouble in 2010 — whoa, too many double negatives there — nor that Democrats might not have done better if Obama’s approval rating was 62 percent instead of 52 percent. It just means that New Jersey and Virginia don’t have particularly much informational value — we won’t become very much smarter about the future based on what happens there. To the extent that we do learn something, it will probably be hints about turnout, motivation and enthusiasm, rather than something about the electorate’s policy preferences.

NY-23 could potentially be more telling, except that the dynamics of the race are so unusual that everyone will have plenty of (good) excuses for whatever outcome might ensue. Still, I’ll bet you that NY-23 — not New Jersey or Virginia — is actually the race monitored a little more carefully on Capitol Hill.