We continue our Presidential Geography series, a one-by-one examination of the peculiarities that drive the politics in all 50 states and the District of Columbia. Here is a look at Maryland, the Old Line State. FiveThirtyEight spoke with Donald F. Kettl, the dean of the School of Public Policy at the University of Maryland; and Theodore F. Sheckels, a professor of communications and English at Randolph-Macon College in Ashland, Va. 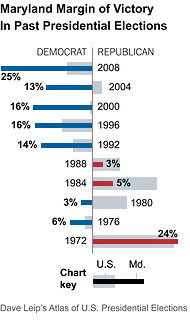 Political contests at the state and national level tend to be settled in the suburbs. Republicans carry the countryside, Democrats win by large margins in big cities, and both parties battle to win the votes of those living in between.

That is an oversimplification, of course, but it’s a useful rule of thumb. In every presidential election since 1980, the candidate who won the suburban vote also won the national popular vote, according to exit polls.

Suburbia’s informal role as the last arbiter of elections also explains why Maryland is among the most Democratic-leaning states. According to the current FiveThirtyEight projection, President Obama will carry Maryland by 23 percentage points; Mitt Romney is projected to win just 39 percent.

Maryland’s urban and rural areas follow the normal partisan pattern: Baltimore is overwhelmingly Democratic, while the more rural parts of the state — the Eastern Shore and western Maryland — tend to vote Republican.

But the pattern falls apart in Maryland’s suburbs, particularly those in Montgomery County and Prince George’s County. For several reasons, a large chunk of suburban Maryland behaves more like a city politically, favoring Democrats by significant margins. 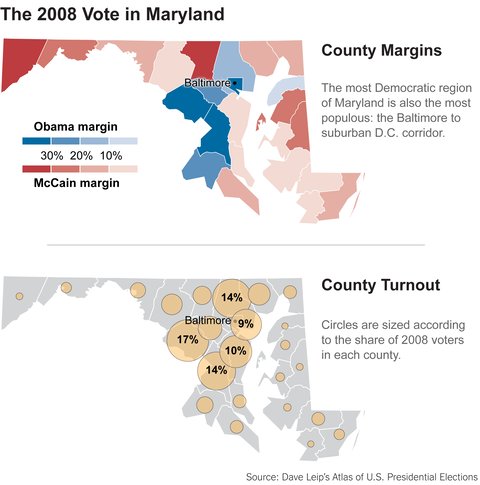 Not all suburbs are equally competitive. Generally, suburbs in the Northeast have been less friendly to the Republican Party than those in the Deep South or Great Plains ever since cultural conservatism gained sway in the party. That dynamic accounts for much of suburban Maryland’s partisan lean (although, Maryland’s northern border doubles as the Mason-Dixon line).

But the same is not true for Maryland’s share of suburban Washington. Mr. Obama won 89 percent in Prince George’s County and 72 percent in Montgomery County, both of which have been made more Democratic-leaning, at least partly, because the federal government is right next door. Both counties have a large population of government workers and government contractors, and both counties are more diverse than typical suburbia.

Maryland has the highest share of black residents of any state outside the South, and the fourth-highest proportion overall, 29 percent. That alone would make the state Democratic. But Maryland’s African-American community is more affluent and more suburban than in most other states (perhaps only the Atlanta region is comparable). The federal government, as Mr. Kettl explained: “has long put a very high priority on ensuring broad and diverse hiring. For a very long time, the government was a place where minority workers could get fair treatment in employment. That, in turn, helped create strong and stable middle-class black communities.” 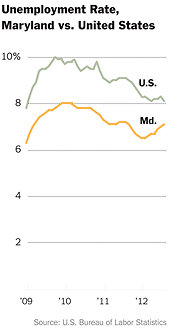 As a result, Prince George’s County, where the majority of the population is black, is highly educated and affluent; it is the 69th wealthiest county in the country, ranked by household median income. That wealth, as well as the wealth of the surrounding suburbs in Montgomery and Howard Counties, has been partly fueled by federal dollars.

And that economic relationship is a hurdle for Republicans.

The Washington suburbs have expanded as the federal bureaucracy has grown. An army of government workers, as well as contractors directly and indirectly employed by the government, live in suburban Maryland. The Republican Party’s message is ill-suited to win their votes. The “evils of big government” narrative is not an effective pitch to a voter who works for big government.

This dynamic is clearly evident in Montgomery County, which is home to a raft of federal agencies, that have helped spawn booming support industries, like defense, biotechnology, technology and health care. The bustling economy has, in turn, attracted immigration. Montgomery is now a majority minority county with large black, Asian and Hispanic populations.

The spread of suburban Washington has passed through Montgomery County and reached Howard County, beginning a transformation from rural and Republican to suburban and Democratic.

At this point in its transition, it is a slightly Republican-leaning bellwether. It has been a couple percentage points to the right of the state in the last two presidential elections. But because the suburbs have continued to expand since 2008, Howard County may be an even more accurate bellwether in this year’s race.

If the Washington metropolitan area continues to expand, Maryland will only get more Democratic. The suburban sprawl has already reached previously rural counties like Howard, Charles and Frederick, Mr. Sheckels said, and Democratic constituencies have been encroaching on Maryland’s Republican territory: western Maryland, Southern Maryland and the Eastern Shore.

Living next to the federal government has had a profound effect on the state. Eleven of Maryland’s 24 counties are in the top 100 most affluent counties by median income. And the state overall has the highest household median income in the country, according to the Census Bureau.

But talk of austerity has increased in Washington, and if it arrives, the region will likely feel the impact economically. In turn, suburban expansion could slow.

The political preferences of Maryland’s ethnically diverse suburbs may also be a harbinger of things to come in other states. Suburban communities across the country became significantly more diverse throughout the 2000s, and it has started to show. Mr. Obama’s share of the suburban vote was the highest of any Democrat since 1980.

Mr. Obama is a 100 percent favorite to carry Maryland, according to the current FiveThirtyEight forecast, and the presidential race is unlikely to receive much attention there.

Instead, same-sex marriage is likely to be a major focus of the fall campaign. Opponents of Maryland’s Civil Marriage Protection Act, which allows same-sex couples to obtain a civil marriage license, gathered enough signatures to put Question 6 on the ballot. The referendum asks Maryland residents to vote for or against the law. If it passes, and polling shows that it may, the Maryland electorate would be the first to endorse same-sex marriage at the ballot box.