Greg Mankiw, a very good economist who has a habit of making vapid comments when he’s not subject to peer review, keeps up the habit in today’s Economic View column in the New York Times, in which he suggests that February’s $787 billion stimulus (i) consisted mostly of Keynesian-type spending and (ii) appears to be a failure:

In fact, the Congress passed a sizable fiscal stimulus. Yet things turned out worse than the White House expected. The unemployment rate is now 10 percent — a full percentage point above what the administration economists said would occur without any stimulus. […]

So what to do now? The administration seems most intent on staying the course, although in a speech Tuesday, the president showed interest in upping the dosage. The better path, however, might be to rethink the remedy.

When devising its fiscal package, the Obama administration relied on conventional economic models based in part on ideas of John Maynard Keynes. Keynesian theory says that government spending is more potent than tax policy for jump-starting a stalled economy. […]

But various recent studies suggest that conventional wisdom is backward. […]

These studies point toward tax policy as the best fiscal tool to combat recession, particularly tax changes that influence incentives to invest, like an investment tax credit.

Both of Mankiw’s claims are questionable. First, let’s take a look at what the stimulus package was actually designed to consist of: 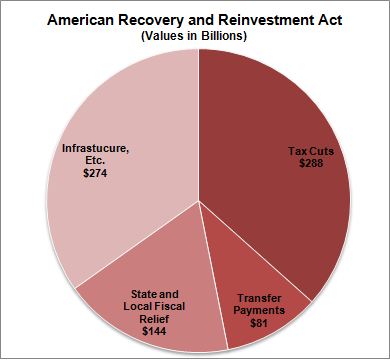 The remaining $225 billion falls into a murky area. Some $144 billion consisted of various types of aid to state and local governments. Doesn’t this belong in the Keynesian category? Well, maybe. But states, unlike the federal government, have to balance their budgets, and all but a couple of them were having great difficulty doing so. If Uncle Sam gives Arizona $1 billion in Medicaid payments — payments that Arizona would otherwise have had to make itself — then that’s $1 billion Arizona can use to help balance its budget. Since Arizona, I think, was projecting to run a deficit, that means these payments can offset either spending cuts or tax increases — we don’t know which. (Indeed, Arizona could in fact have cut taxes with the extra cash if it wanted, although I’m aware of few if any states that had the luxury to do so.) The point is, some fraction of that $144 billion — we don’t know exactly what fraction — also consisted of tax relief (mostly in the form of offsetting anti-stimulative tax increases).

Finally, about $81 billion of the stimulus consisted of transfer payments to individuals in the form of things like extended unemployment benefits, food stamps, and one-off payments to Social Security recipients. This also falls into a murky area. Take, for instance, the $14 billion that was doled out in the form of $250 checks to all Social Security recipients. It gets classified as a transfer payment. But if it instead consisted of a $250 tax credit check mailed out to all seniors, the economic effect would have been essentially identical, only it would have been characterized as a tax cut. Maybe it’s the wrong type of tax cut — Mankiw indeed bemoans “lump-sum rebates, as was done in spring 2008” (by his former boss!) — but it’s a de facto tax cut nevertheless.

Indeed, it’s probably fair to think of the stimulus as consisting of about half tax cuts. About 37 percent of the stimulus consisted of tax cuts which were labeled as such. But also, some fraction of the 10 percent labeled as transfer payments functioned like tax cuts, and some fraction of the 18 percent allocated to state and local governments had the effect of offsetting tax increases (or perhaps financing a tax cut proper in a few cases).

On the other hand, only 35 percent of the stimulus package consisted of government purchases, the most Keynesian off all categories. And the thing about that 35 percent is that, as some critics of the stimulus rightly anticipated, it’s been slow to get doled out. For instance, the government’s website, Recovery.gov, reported that only $37 billion in grants and loans had so far been paid out to individual projects as of 10/31 (the figure appears to be closer to $63 billion now). In contrast, the tax cuts were quicker to be distributed — for example, the average American worker has had $13 less withheld from his paycheck each week because of the payroll tax credit. The government reports, indeed, that $93 billion of the stimulus had been paid out as of October 31st in the form of tax cuts, and the figure is probably closer to $105-$110 billion by now. The transfer payments and state/local relief, meanwhile, have been quicker still to be paid out.

As best as I can tell, about $220 billion of the stimulus had actually been spent as of 10/31, distributed approximately as follows: 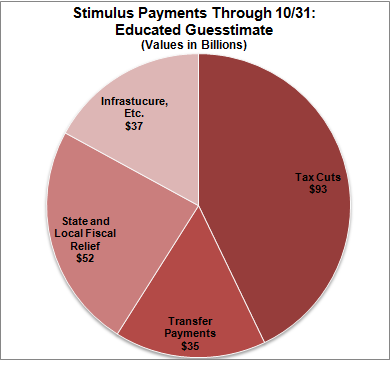 That’s 40-45 percent tax cuts, 15-20 percent direct investment, and 40-45 percent in the other two, in-between categories. In other words, the stimulus — in terms of its potential impact on the economy thus far — looks at least as much like Mankiw’s alternative as the “conventional economic models” that he trashes.

All of which might indict Mankiw’s thesis — except that he also may be wrong about his other conclusion: that the stimulus is not working. Mankiw cites studies describing the impact of various types of stimulus on GDP — not unemployment — and as we pointed out yesterday by GDP standards the stimulus has done quite well, with 3Q growth coming in at 2.9 percent versus a consensus forecast of 0.7 percent and 4Q GDP poised to print at about 4.0 percent versus a forecast of 1.9 percent.

Mankiw’s skepticism about the stimulus’s effects on unemployment is certainly more reasonable since the math is unavoidably fuzzy there. But: (i) to the extent that you believe the CBO, the number of job created by the stimulus has been exactly in line with expectations and, (ii) it’s more than a little disingenuous for Mankiw to cite studies mentioning the impact of stimulus on GDP in one breath and then mention GDP only in passing (“To be sure, there are some positive signs, like reduced credit spreads, gross domestic product growth and diminishing job losses”) in another.

So, to summarize: Mankiw is wrong that the stimulus consists mostly of Keynesian-type investments. So far, it has been closer to the tax cut end of the spectrum. But he’s also wrong that the stimulus is not working. By the benchmark that he implicitly endorses — GDP — it’s done very well. Mankiw is so wrong, in other words, that he may actually be right: the stimulus looks a lot like one he might have designed, and it’s helping the economy.