Greece’s tourism industry is bracing for a blow from tax increases included in the deal with the country’s creditors for a new bailout package. Research on tourism taxes suggests that the measure could hurt the lower end of the industry, but could also raise some money to help Greece pay its debts.

Some of the researchers who have studied the effects of tourism taxes elsewhere doubt that Greece’s tourism industry will lose most of its more-lucrative visitors. Richard S.J. Tol, an economist at the University of Sussex in the U.K., has used historical travel data to study the potential impact of eliminating a 3 euro Ireland travel tax on tourism from the U.K. He found that Ireland would give up more in tax revenue than it would gain in tourism spending.

The research on tourism taxes covers a range of places, tax types and time periods. None is today’s Greece, which is facing an increase in the restaurant meal tax to 23 percent from 13 percent, as well as a doubling of the hotel tax to 13 percent. So that might limit the findings’ applicability. Also, while the tax’s impact might be minimal for travelers from other countries, whose airfare might dwarf local costs with or without tax increases, it could take more of a toll on domestic tourism.1

But it’s clear that Greece has done what local and national government officials around the world often do when they need money: raise taxes on visitors who do not vote for them. Tom Knipe, a senior planner for Tompkins County, N.Y., in Ithaca, who has studied the effect of hotel taxes, said the appeal of shifting burdens to outsiders is a big reason to increase tourism taxes.

“These types of taxes tend to be palatable to communities because in essence someone else pays them, with the benefits of the taxes accruing to the local community,” Knipe said in an email. As a result, he added, “tourism taxes can be a more efficient tax than other taxes.”

As a graduate student at Cornell University’s department of city and regional planning, Knipe summarized existing research and concluded that local hotel taxes in the U.S. typically fall on people outside the local area, and often have little negative effect on hotels’ business. He said in the email that he thinks parts of Greece that appeal to budget travelers would be hit hardest.

In order for the tax to turn tourists away, they’d have to find somewhere else to go. Tol said in an email that he doubts that would happen with Greece.

“All in all, this is a modest increase in the total price of the holiday,” he said. “Modest price increases have a big effect if there is a similar holiday destination next door — but Bulgaria, Sicily and Turkey are different.”

Other factors affect tourism much more than tax increases. Most important is the economic situation in countries that send the most tourists to Greece. Tourism to Greece contracted during the economic crisis of 2009 that affected many of its neighbors. 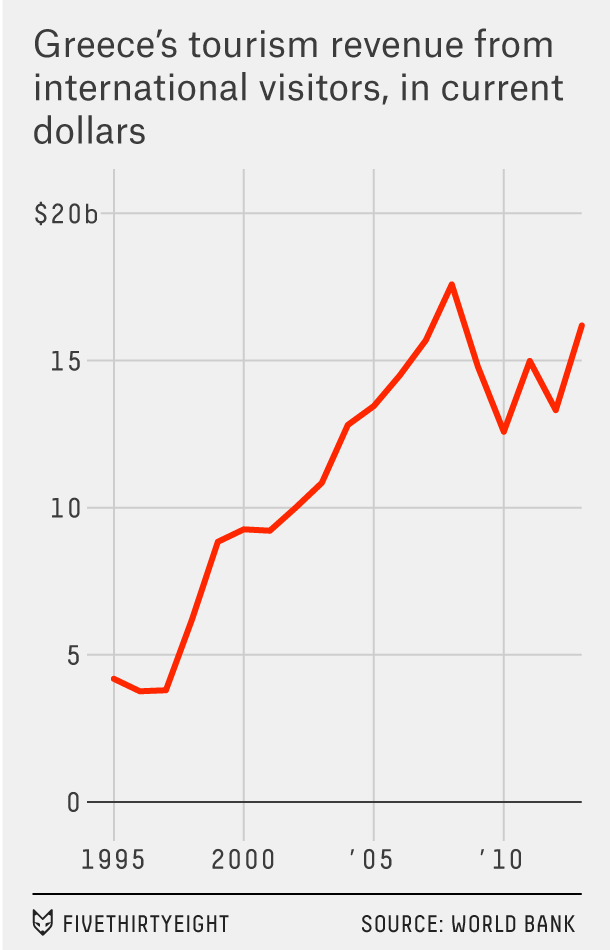 There’s one significant way that the proposed Greece tax increases could hurt the local tourism industry more than tourist taxes in other places: what the government does with the money. Greece is likely to buck the norms and use the money to pay off debt, under the terms of the deal. That, Knipe said, “has the potential to dampen tourism over the long term. Many communities choose to invest most or all of their tourism taxes back into tourism-related amenities to ‘protect the goose that lays the golden egg.’”