10:45 PM. To the less generous commenters: I don’t really feel badly at all about our projection in South Dakota. There were versions of the model that had Obama winning by 10 or 11 points, and there were versions that had Clinton winning by 7 or 8 points. In the end, I went with a sort of compromise between the two, and caveated in the write-up that Clinton could outperform those numbers if you use a version of the model that gives more weight to the trends inherent in the race, rather than assuming that the demographics are stable from state to state. (It’s also probably the case that your margin of error is going to be higher with this sort of thing when you look at a state that has one congressional district as opposed to 20).

At the same time, South Dakotans behaved in a somewhat unusual way, in that Obama’s favorability scores (on questions like whether voters would be satisfied with him as the nominee) were as high as they were in many states that Obama *won*. This was a state in which voters got a positive message from both candidates, and the late deciders broke to Clinton because she spent more time on the ground there. It may be instructive about what Clinton might have been able to do had she a more positive message throughout her campaign. There’s a pretty good argument that the beginning of the end for Clinton was way back in November with “now the fun part starts”.

10:32 PM. re: the comments. Nope, no bragging vis-a-vis ARG. It looks like the South Dakota margin is going to come in at 10 points (it might close a tiny bit as most of the unreported vote is from Indian reservations), which almost exactly bisects their Clinton +26 and my Obama +5. This is the whole argument, I guess, for combining polling with demographic sanity checks, which is what we do for our general election numbers.

It does look like we’ll beat ARG in Montana, though.

“I fervently agree that the extended campaign has made Obama a much better candidate. On the night of New Hampshire, he turned a shocked and depressed staff around immediately. On his conference call, he explicitly told them the loss would be a blessing in disguise. And after contesting 56 contests, there is no doubt Obama’s ready for McCain. He’s salivating for McCain.

This is a candidate who has been through the gauntlet and shook up the world.

I’ll have to put some thoughts together as far as Brian Schweitzer as VP. Jon Tester just threw that out there with obvious impery live on MSNBC.”

10:01 PM. I don’t know if this means anything, but to the extent I’ve been able to watch two channels at once, CNN’s coverage has actually been much more critical of Clinton than MSNBC’s.

9:49 PM. The Obama website has yet to update it to include Montana, but this little graphic deserves more credit that it’s gotten for building a sense of momentum throughout the ultimately decisive month of February: 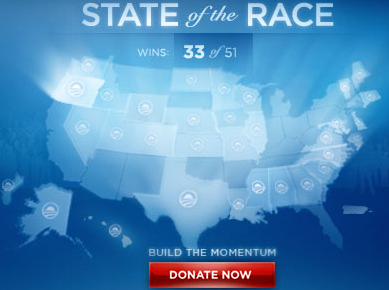 9:30 PM. The largest remaining scheduled moments in the campaign between now and November are the conventions and the debates. Is there any doubt that Obama is going to deliver a better convention night speech? Is there any doubt that, the first time he and McCain appear on a stage together, the contrast in age, height, and tone is liable to be pretty striking? McCain needs to figure out some way to wage a sort of guerrilla warfare campaign. If everything sticks to the script, Obama is going to win.

9:17 PM. Sean is somewhat less equivocal on Clinton’s speech than I am:

“‘We have won enough swing states to get to 270 electoral votes.’

I am very much looking forward to the end of the relentlessly cynicism. She knows most Americans won’t know enough to immediately call out the deception underlying those kinds of effortlessly and endlessly repeated comments. The Clintons and their surrogates have peppered the land with outright contempt for the intelligence of Americans when it comes to building arguments. Yeah, there’s a 1-to-1 map with winning a state in a primary and winning it in the general. Sure. The disdain for facts, the Lanny Davisication of political spin is something I am looking forward to putting behind us. After 8 loooong years, my tolerance for that kind of drearily self-serving cynicism is nonexistent.

As far as the content of Clinton’s speech, while I am emotionally closed to her for her behavior this campaign cycle, that speech was not aimed at me. There were some very nicely worded turns of phrases that surely connected with many of her supporters, particularly that each vote was like a small prayer (though I think she stole that from Newman’s closing in The Verdict). I understand that her supporters need to hear some of those things. Even chant Den-ver, Den-ver one last time for good old comfort. She isn’t deciding anything tonight, it got decided on her. That was always the way out.

2012 is not an option. It’s something to talk about for people who have to speculate, but I think if she really believed it were an option should Obama lose, she needed to speak to the people like me, to begin to try to open to her. And she made no attempt in that regard, nor did I expect her to.”

9:11 PM. Back to South Dakota for a moment: the exits have Barack Obama having won the “other” vote (a.k.a. Native Americans) by about 12 points. Relatively little of that vote has been tallied yet, so the margin is probably going to tighten by a couple of points.

9:03 PM. The exits imply a 14-point win for Obama in Montana. The strongly divergent results in two relatively similar states are a good reminder of how much time spent on the ground can matter.