One of the most persistent questions in higher education today is whether college is worth it. Broadly speaking, the answer is still yes, assuming you graduate, as my colleague Ben Casselman has pointed out. And a report released on Wednesday shows just how much more value is provided by a four-year college than a two-year college for those who graduate.

The report, by the Brookings Institution, is based on a new ranking system that compares how a degree affects a student’s future earnings across thousands of American colleges. It’s a notable departure from the rankings of publications such as U.S. News and World Report and Forbes, because it focuses on graduates’ outcomes after college rather than the selectivity of students entering college.

But the Brookings report stands out in another way, as well: It includes measures for over 7,000 four- and two-year institutions, giving a glimpse into how the impact of those types of colleges differ.

Perhaps the Brookings report’s most significant finding in this regard is that while economic outcomes for graduates from four-year schools were highly correlated with student entrance-exam scores, there was little correlation between the two for graduates from two-year schools. In other words, the SAT scores of four-year graduates can predict how much more they will earn over time, but the scores of two-year graduates — even good scores — don’t necessarily predict future success. (Similarly, bad scores don’t predict failure.) 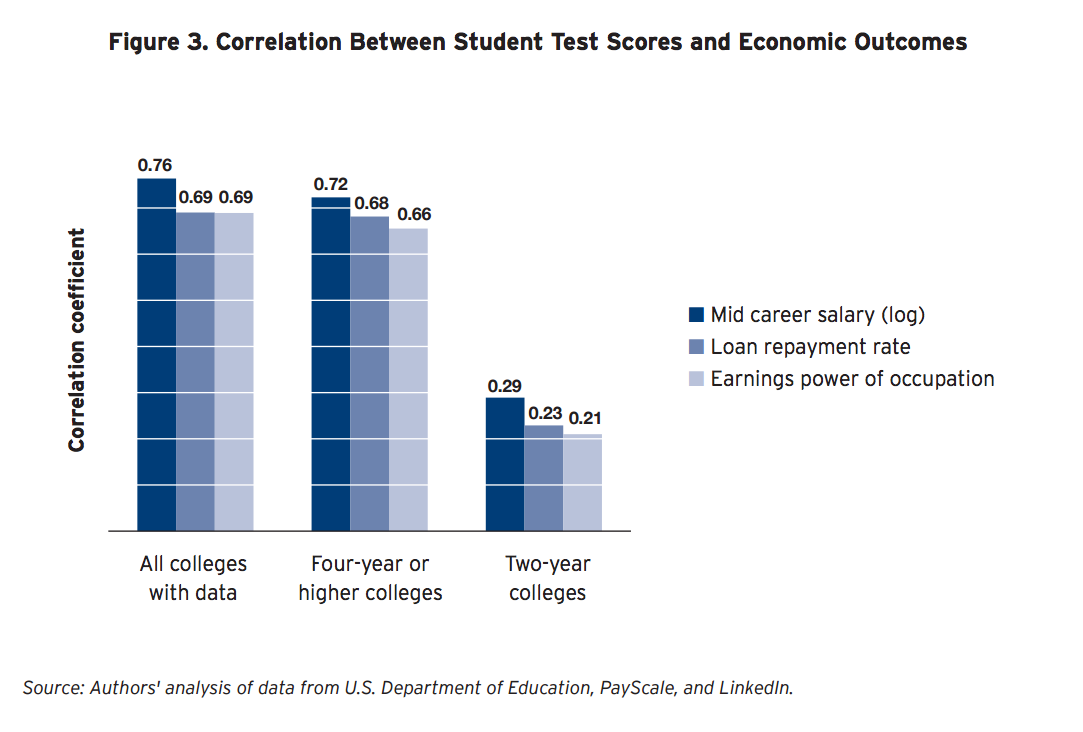 This finding reflects one of the core differences between the two educational models — two-year degrees typically focus on a specific career path and technical training, while four-year degrees involve a more well-rounded approach, requiring coursework in a variety of fields.

That’s not to say that community colleges don’t add value to their students’ post-grad outcomes. The top two-year school, NHTI-Concord’s Community College, is competitive with the top four-year school, California Institute of Technology. It merely suggests that, on average, two-year schools have room to help improve their alumni outcomes along these metrics.

This report is the first of its kind, meaning we don’t have any type of meaningful historical context. But its focus, much like the White House’s College Scorecard, reflects the national conversation of college worth. Within the context of that conversation, research like this will help students make more informed decisions about how schools will prepare them for a post-grad career, rather than just how selective they are.