Over at Pollster.com, Brendan Nyhan (whom you should be reading) espouses a fairly common sentiment: that Sarah Palin’s favorability numbers, while poor, are not a whole heck of a lot worse than Hillary Clinton’s were at the same point in the electoral cycle.

Hillary Clinton overcame numbers that were nearly as bad and almost won the Democratic presidential nomination, but she did so with a great deal of hard work and discipline — qualities that Palin appears to lack.

Is this actually true though? (Not the bit about Palin’s work ethic, which I’ll address later in the post.) Are Palin’s ratings nearly as bad Clinton’s at the same stage of their political careers?

It depends on how you define “nearly as bad”. But I’d say there’s a meaningful difference in Clinton’s favor, especially if we look at Palin’s ratings since her resignation from Alaska’s governorship earlier this month. 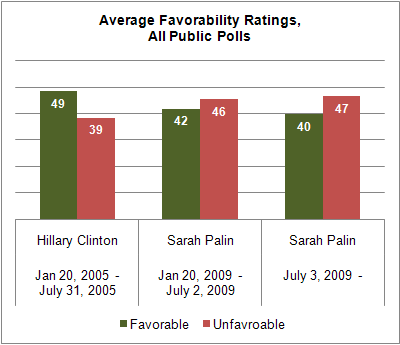 This chart takes a simple average of all publicly available polls on Hillary Clinton between the start of George W. Bush’s second term on January 20, 2005 and the end of July, 2005. There are nine such polls, representing six different polling agencies. We compare this to Sarah Palin’s numbers since Barack Obama’s inauguration, both before (an average of nine polls) and after (eight polls) her resignation.

Clinton’s numbers four years ago were about 7-9 points better than Palin’s are now (or twice that if you’re looking at these on a net basis). Although a fairly sizable amount of the country disliked Clinton, she was still in positive territory. Palin generally has not been. Since her resignation, her numbers have run from a +2 on the high end (PPP on July 16th) to about a -13 (in several different polls) on the low end. Palin has also had five polls since the start of the year, including three since her resignation, where her unfavorable scores were 50 or higher. Clinton did not hit 50 percent unfavorable at all in 2005 and 2006, and didn’t do so until a USA Today/Gallup poll on April 13-15, 2007 (although she’d been there once or twice before in 2001). And this was a somewhat isolated incident: Clinton’s favorability ratings have been taken about 190 times since her husband’s term ended in 2001, and on only 7 occasions did she hit the 50 percent threshold, although you can certianly find plenty of examples with her in the mid-to-high 40’s.

And we should bear in mind that Clinton, although she seems like a success story, ultimately did not become President. She came close, and undoubtedly could have become President in some parallel universe where a few things had turned out differently, but she did not quite get there. Perhaps if her favorability ratings had been a bit better, Clinton would not have run throughout 2007 on as facile a theme as “inevitability” (you might not like it, Democrats, but you’re getting it!) and would have discovered some of the more positive tones that did her well in New Hampshire, late in the primary cycle, etc., a bit earlier.

Palin beings with a steeper hill to climb … and to my view, I don’t think she’s likely to be as capable as Clinton of (almost) getting there. To Nyhan’s point, there are differences in work ethic (although Palin’s is not poor), political instincts (although Clinton’s were not perfect — she hired Mark Penn) and frankly (and most importantly) raw intelligence. Palin also begins with much less institutional support within her party than Clinton did, although she may have more grassroots support.

We’re not in the business of saying “never” around here. Palin absolutely could become President someday. But it isn’t very likely. If the Republicans nominate her (which is certainly possible), I think Obama could get away with having approval ratings in the low-to-mid 40’s and still be at least even-money to win. That wouldn’t be the case against Mitt Romney.