You hear a lot of talk about waste, fraud and abuse in government, and how eliminating it might solve our fiscal problems. It won’t. Like John McCain’s repeated, annoying complaints about porkbarreling monies, which if completely eliminated would hardly dent our national deficit, the notion that, say, Medicare fraud is reason for our health care cost problems is a joke. 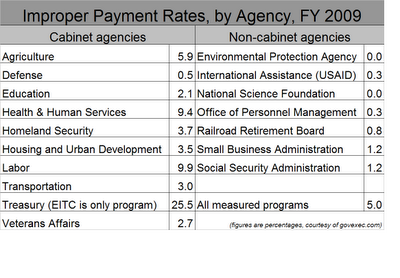 But that doesn’t justify waste through improper government payments, which is a serious and remediable problem that cost the government $98 billion last year–nothing to sneeze at, and a sharp uptick from $72 billion the previous fiscal year. So last Friday President Obama signed an executive order that requires a systematic review of relevant agencies to correct the problem of improper payments in federal programs. Within three months, the Office of Management and Budget will identify agencies with serious payment problems, and within six months the OMB director, in conjuction with the Attorney General and Secretary of the Treasury to implement a process to correct identified problems.

Government Executive.com’s Elizabeth Newell reports that Peter Orszag and crew are aware of the problem and already working on it. “We can no longer tolerate these errors, mistakes and misdeeds,” Orszag said. “Every dollar misspent is a dollar not going to help an unemployed worker, a family in need of help buying groceries, or a senior who relies on Medicare to stay healthy.” (I want to extend a special thank you to GovExec’s Alyssa Rosenberg for help with this post.)

Looking at the improper payment rates above, courtesy of this PDF from Government Executive.com, it’s clear that some of the cabinet and non-cabinet agencies that liberals tend to defend and conservatives oppose are among those with the most embarrassing improper payment rates. Holding aside the Treasury Department–which tops the list by far in the share of improper payments, at 25.5%, all of which is for the Earned Income Tax Credit program–many of the most wasteful programs are liberal favorites. Because the table above would have been too noisy, I didn’t list every one of the 72 measured programs, but among the programs above the national average of 5.0 percent are the Ag Department’s School Breakfast (24.6%) and School Lunch (16.4%) programs; HHS’ Medicare Fee-for Service (7.8%), Child Care and Development Fund (11.9%), Medicaid (9.6%) and Medicare Advantage Part C (15.4%) programs; Homeland Security’s Disaster Relief Fund Vendor (8.8%) and Homeland Security Grant (18.8%) programs; Labor’s Unemployment Insurance program (10.3%); Treasury’s EITC (25.5%), and the VA’s Pension (11.2%) and Fee (17.0%) programs.

This is an unacceptable level of fraud and waste in programs that are often unable to fully serve the needs of populations that require serious help. It will be interesting to watch as this oversight process takes shape, and I’ll check back in six months from now to see what OMB has learned–and what they are going to do about it.