In Washington mythology, the shutdowns are perceived as the events that allowed Bill Clinton to turn his ship around, winning re-election easily in 1996 after his Democrats received a drubbing in the 1994 midterms.

Over at The Monkey Cage, however, John Sides has drawn a graph that tracks Bill Clinton’s approval ratings over this period, which places some doubt upon that conclusion. Here is a slightly cleaner version of Mr. Sides’ graphic, which uses only Gallup approval ratings (since those are the ones I have in my database) rather than those from other polling agencies: 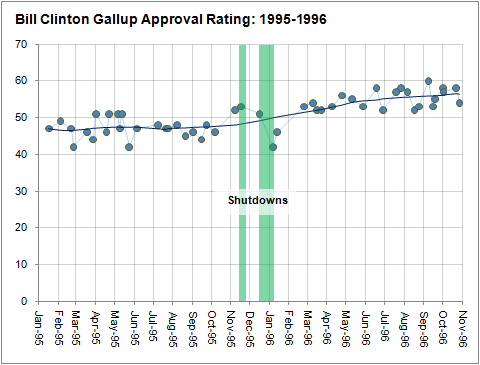 The shutdowns seemed to create some volatility in Mr. Clinton’s approval rating. During the course of the second shutdown in particular, his approval rating declined by about 10 points in the Gallup poll from start to finish, although the impact was less than that in polls issued by other agencies.

At the same time, once Mr. Clinton was free and clear of the shutdown, his approval rating ticked up to 53 percent in a Gallup poll conducted from Feb. 23-25, 1996, and it remained at essentially that level, or improved slightly, until the November election. Mr. Clinton’s approval rating, by contrast, had never been as high as 53 percent at any point in 1995 before the shutdowns began, although it had been 52 percent in a poll conducted just beforehand in early November.

Another way to visualize the impact is to remove all the data points from polls that were conducted while the shutdowns were underway, or in their immediate shadow, and then draw linear trendlines on the ‘before’ and ‘after’ series, respectively. 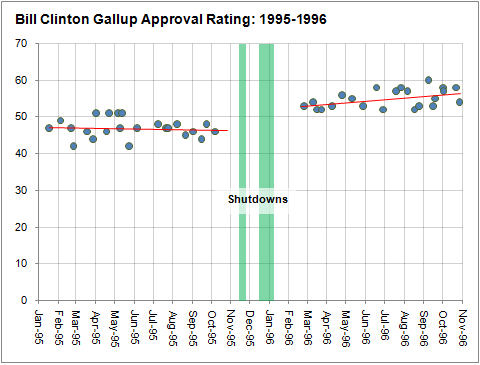 Looking at things this way, we probably do see some impact: Mr. Clinton’s approval rating was on a trajectory of about 48 percent before the shutdowns, but re-emerged on a 53 percent heading once they were over.

Still, that’s only a 5 point improvement under what are arguably generous assumptions.  And Mr. Clinton’s win in 1996 was not all that impressive; his 8.5-point victory over Bob Dole is about what political science models would have predicted given the healthy state of the economy and the fact that the United States was at peace. Moreover, Mr. Clinton’s win had very few coattails for Democrats in Congress; they gained just 9 seats in the House and actually lost 2 in the Senate.

This is despite the fact that polling conducted during the period revealed that the public blamed Republicans in Congress for the shutdown more than they did Mr. Clinton. Mr. Clinton “won” the shutdown, and it probably helped him — but we’re talking about something tantamount to the Yankees sweeping a weekend series against the Red Sox, rather than winning the seventh game of the World Series.

And in contrast to 1995, when polls suggested fairly clearly ahead of time that the public was prepared to blame Republicans for the shutdown if one occurred, the numbers are more equivocal this time around, showing them either evenly divided or just a bit more likely to blame Republicans, depending on how the question is phrased.

Also, I don’t know whether these polls are necessarily all that meaningful. People are fairly bad at predicting how they will react in the event of some future hypothetical, and most people are not expecting a shutdown, so some of them will probably re-assess the situation were one to occur. Barack Obama probably has some tactical advantages in the event of a shutdown — he is perceived as more capable of compromise than the Republicans, his party is more unified, and the timing of the release of Paul Ryan’s 2012 budget, which is not likely to poll well, could create some problems for the G.O.P. — so he probably has more upside than downside risk.

I wouldn’t want to characterize the shutdown as being politically unimportant — clearly it’s not a trivial event, and clearly there’s some significant amount of uncertainty in just how the public might react. But my guess is that its political impact is likely to be exaggerated by some of my friends in the press. Some of the reason is simply that much of the political media is based in Washington D.C., where the effects of a shutdown — The Smithsonian is closed! My next-door neighbor just got furloughed! — are far more palpable than they are elsewhere in the country.

Update (10:04 PM): Back at The Monkey Cage, Mr. Sides is still skeptical that there was any effect on Mr. Clinton’s approval rating at all. He cites additional polling showing that — in polling conducted within a week or so after the shutdown ended — Mr. Clinton’s approval ratings did not show any gain at all. You can see one of these data points in the top graph — a Gallup poll conducted on Jan. 12-16, 1996, that had Mr. Clinton’s approval at 46 percent, but it was (deliberately) removed from our second graph. (The Gallup poll conducted on Nov. 6-8, 1995, just a week before the shutdown, was also supposed to have been removed from the second graph; that’s been fixed now.)

It’s hard to attribute cause and effect here — something which is frequently an issue with presidential approval data. On the one hand, it is not a good habit — in fact, it’s usually a very bad habit — to remove ‘noisy’ data points just because they don’t happen to conform to your story. On the other hand, it may be a bit too literal-minded to require that Mr. Clinton’s approval improved during the shutdown itself — nobody was happy about the shutdown itself — as opposed to the during sequence of events associated with the shutdown, including the brinksmanship leading up to it and the immediate fallout from it. If you remove the “noisy” polling conducted during the shutdown, and within a week on either side of it, there does appear to be a discontinuity in the graph.

Mr. Clinton, for instance, gave a well-received State of the Union Address on Jan. 23, 1996, shortly after the second shutdown had ended. Could that have caused the bump in approval? Maybe, but State of the Union addresses rarely cause even temporary bumps in the polls, let alone permanent ones. Perhaps that was the point at which Mr. Clinton “cashed in” on the political capital he had won during the shutdown.

Keep in mind, however, that even if we “cheat” by removing the noisy data points, we’re nevertheless talking about a gain of not more than 4 or 5 points in Mr. Clinton’s approval rating. My conclusion, like that of Mr. Sides, is that the shutdown is remembered as being considerably more important today than it probably was in practice.