Gallup has data out suggesting that 89 percent of self-identified Republicans are white; the comparable figure among Democrats is 65 percent. These numbers closely match those from last November’s Presidential election, when 89 percent of John McCain’s voters were white as were 60 percent of Barack Obama’s, according to exit polls.

This, however, is not exactly anything new. 88 percent of George W. Bush’s voters in 2004, and 91 percent of them in 2000, were white. And nearly 98 percent of Ronald Reagan’s voters in 1980 were white as were 96 percent of Gerald Ford’s in 1976. The GOP is, in fact, slightly less white than it once was, as they do relatively better among Hispanics and Asians than among blacks (if still not particularly well), and Hispanics and Asians are starting to make up a larger fraction of the nonwhite (and overall) voting pool. 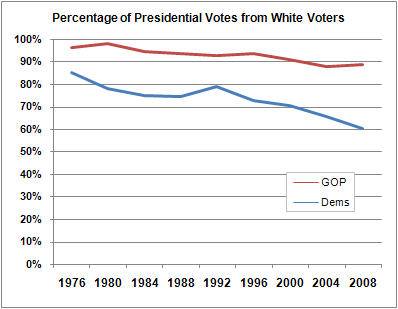 The Democrats, however, are becoming less white at a much faster rate than the Republicans. Whereas 85 percent of their votes were from white voters in 1976, the number was just 60 percent last November. This is, of course, a helpful characteristic, since the nonwhite share of the electorate, just 11 percent in 1976 and 1980, represented more than a quarter of the turnout in November.

In certain ways, I wonder if the GOP isn’t paying a price for a strategy adopted years ago — namely, the Southern Strategy. The Southern Strategy undoubtedly won the GOP many elections over the years, but it was adopted at a time when probably less than 10 percent of the electorate was nonwhite (if minorities were allowed to vote at all), whereas now about a quarter of the electorate is. The steady drumbeat of demographic change, coupled with an inability or unwillingness to adapt to it, has steadily made the Republicans’ job harder and harder.