I don’t know how predictive this is, but here’s something interesting: the volume of search traffic conducted on Google over the course of the past month. 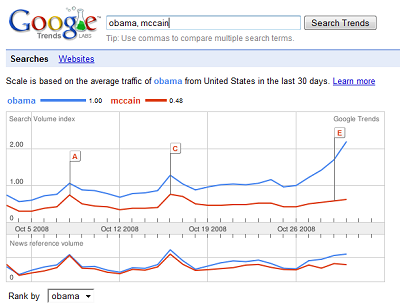 There’s been an uptick of interest in Obama, but McCain’s numbers have flatlined. He’s not controlling news cycles and there’s little evidence that voters are taking a second look.

Of course, you could frame this as voters taking a second look at Obama: we don’t know how many of those searches are “Obama god damn america” or “Obama Khalidi”. But generally, if you’re relying on a scenario wherein the electorate substantially reorients itself within the final 96 hours, you’re going to want to see a surge of interest in your candidate.