As you may have heard, the Democratic Congress just passed a big health care bill on a close-to-party-line vote, the Democratic President is about to sign it, and–oh yeah–the Democrats are expected to get slaughtered in the upcoming November elections.

But, as the timing of the above links reveals–the 2010 election prediction was made in September, 2009–it would be a mistake, when November 2010 rolls around, to attribute a Republican sweep to the events of March, 2010. During all those months from September through Feburary, a period when passage of the heath care bill was far from certain, the Republicans maintained their lead in the polls and thus their anticipated midterm election gains.

And I think that, when November rolls around, the pundits will realize this. Sure, one or two might say something about how the voters were punishing Obama and the Democrats for going too far in March, but then the more clueful pundits will get on their case and say: “No! Remember, the Republicans were expected to do well in the midterms, with authoritative predictions being made as early as September, 2009.”

One thing that interests me here is the role of the political science profession in this story. By laying out our 2010 predictions early, we short-circuited what could otherwise have been a popular narrative about the election. This is something I’ve been thinking about for over 20 years–ever since Michael Dukakis’s election loss was attributed (inappropriately, according to our research) to campaign strategies rather than to general economic and political conditions.

Quantitative research is not just about making predictions; it’s also about changing the storyline.

P.S. Here’s the key graph (from Bafumi, Erikson, and Wlezien): 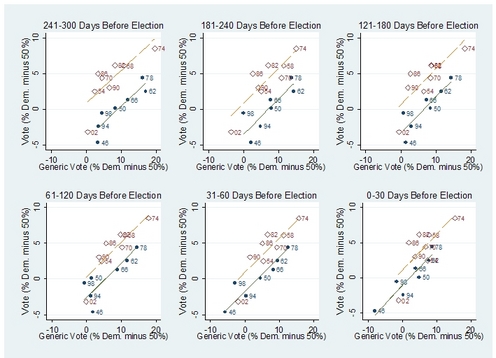 Follow the first link above for more discussion of the research.

P.P.S. In response to the first comment below: The above assumes that the 2010 election goes roughly as expected. If things are much different, one way or another, then, sure, it might make sense for the events of March 2010 to be part of the story.

P.P.P.S. In response to commenter #2: I hope we short-circuited the wrong narrative. I’m somewhat optimistic about this short-circuiting because I think that posting at 538 does have some effect!