A close call in the first round of the NBA playoffs doesn’t always doom a team. In 2008, the Boston Celtics, coming off a 66-16 season, needed seven games to get by an Atlanta Hawks team that had gone 37-45. But they wound up winning the NBA title.

Those Celtics, however, may be more the exception than the rule. In fact, an extended first-round series is often an ominous sign for the winning team. If recent history is any guide, then this year’s Indiana Pacers, who needed seven games to defeat this year’s Hawks, may be no better than even money against the Washington Wizards, whom they begin playing Monday night. 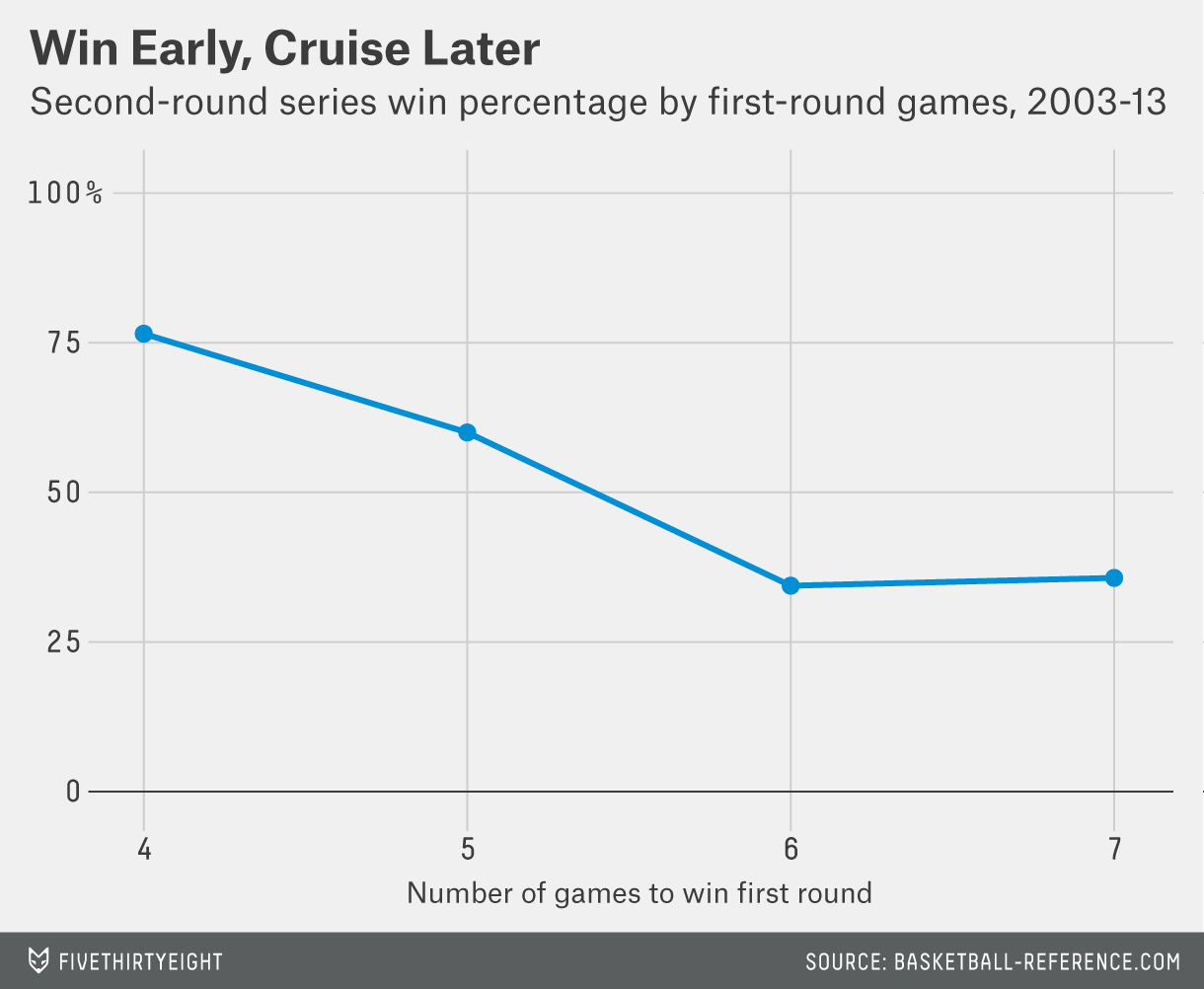 Still not convinced this is a real phenomenon? We can further account for the effect of team quality by evaluating how a team performed relative to its regular-season power rating. Specifically, we can formulate a projected scoring margin for each second-round game based on each team’s SRS rating from the regular season and whether it has home-court advantage. (This is equivalent to a point spread.)2

We can then average a team’s margin of victory or defeat throughout the second round and compare it to what was expected from its SRS. The advantage of this approach is that it accounts for a team’s overall strength and that of its opponent based on each team’s regular-season performance.

This analysis produces some highly significant effects. On average since 2003, teams that swept their opening-round series outperformed their SRS projections by 3.0 points per game in the second round. Those that took the full seven games in the opening round did much worse than expected in the second round, by contrast, underperforming their SRS by an average of 5.7 points per game. These are enormous differences in the context of highly competitive playoff series. 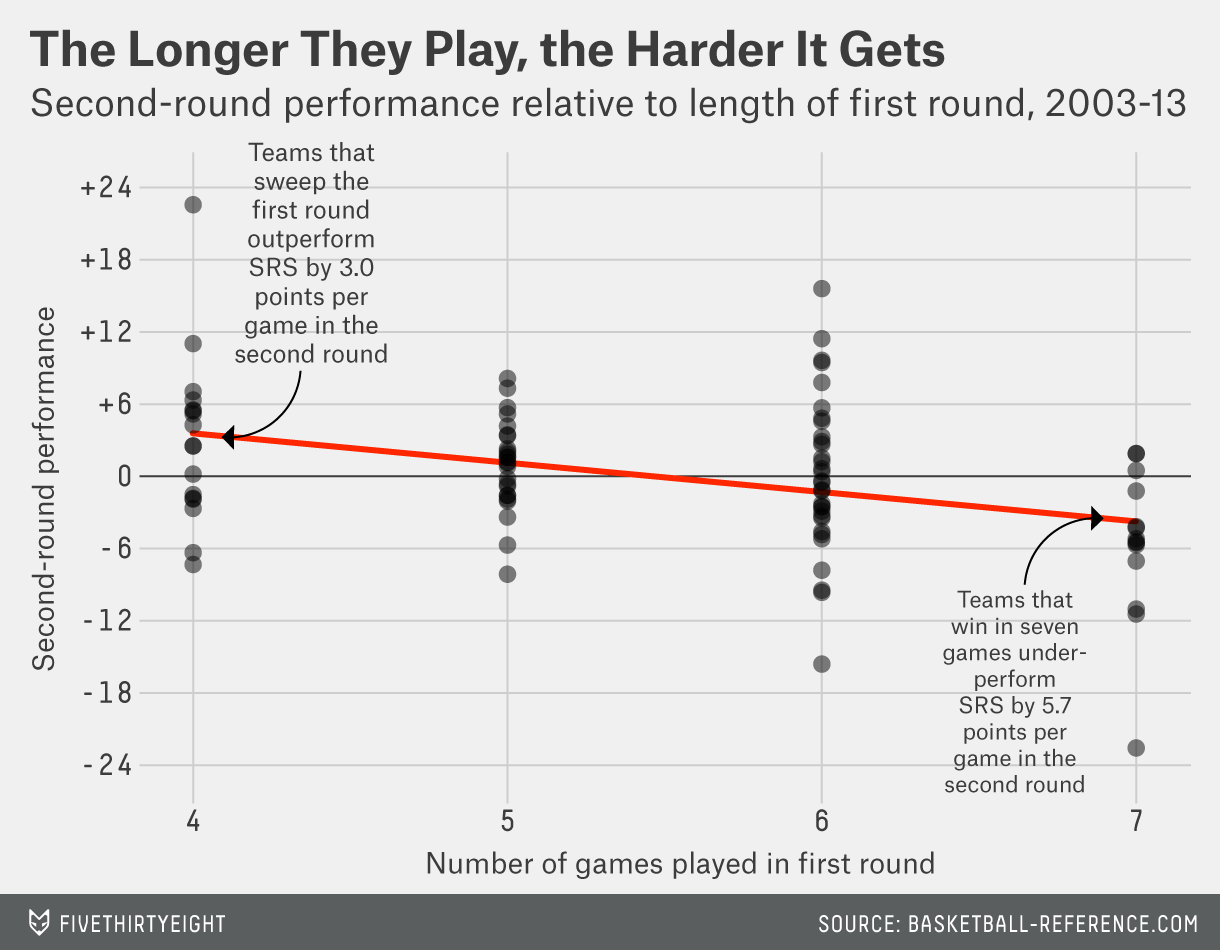 A more complicated version of the analysis accounts both for how many games a team took to win its opening-round series and for how well it performed relative to its SRS projections in the first round. It’s worth distinguishing these because a close call in the first round, like the one Indiana had, could lower our expectations for a team’s second-round performance for either of two reasons. First, if a team plays more games, it could be more fatigued. Second, playoff performance provides some evidence about a team’s quality under playoff conditions.3

We can use this regression analysis to estimate how much this year’s first-round playoff series should affect a team’s odds for the second round. We accomplish this by computing the probability of a team winning its second-round series based on its regular-season SRS,5 and then, alternatively, with a modified version of SRS that accounts for how many games it took to win the first round and its average margin of victory in those games.

Actually … I don’t have the guts to show you those numbers. The effects are so pronounced that I don’t quite trust them; a number of other studies have documented the importance of rest to NBA teams, but they haven’t shown quite so large a magnitude. More important, if you use the same formula to compute the effect of the second round on the conference finals, for instance, or the conference finals on the NBA Finals, you don’t see anything like this. So what I’m going to show you instead are the numbers based on a toned-down version of the formula that computes the numbers-based data from all playoff rounds, and not just the first round. Perhaps there’s something unique about the first round and how a team transitions to the second round, but I’d have to be convinced. If you want to see the numbers based on that uber-aggressive version of the formula, check the footnotes.6

The formula has the Pacers going from being 3-to-1 favorites to beat Washington to about even money. This is obviously something of an extreme case of a No. 1 seed struggling and facing a No. 5 seed that played very, very well and is much better rested. I might be biased since I’ve been called a wizard, but I can buy that the series is about even given how much Indiana struggled late in the regular season.

San Antonio needed seven games to beat Dallas, but Portland took six to beat Houston in a very competitive series. Part of this, however, is that the Spurs had more to lose, since they were heavily favored against Dallas while Portland wasn’t against the Rockets.

SRS had this series as a toss-up before, and since both the Thunder and the Clippers took seven games to win their first-round series, nothing much has changed.