There’s a cohort in the country that only knows the Gonzaga Bulldogs as college basketball royalty. Among that cohort is Mark Few’s active roster, of which only one member of the starting lineup was alive when he was named head coach in 1999. Gonzaga has piled up 614 wins in the two decades since. In fact, there has been so much winning that a 15-0 start to the season could describe either the team’s 2016-17 or 2020-21 campaigns.1

High-water marks can be difficult to establish when the bar is set in the rafters. Gonzaga is the winningest college basketball program since 2010 and has reached 21 consecutive NCAA Tournaments. It hasn’t finished worse than a Sweet 16 appearance in the previous five tourneys. Yet this year’s team, which has already “scared” members of the reigning national champions, is on a singular track to arguably be the best in program history and perhaps the first to cut down the nets.

The Bulldogs defeated three top-15 teams in the first four games and stacked up four victories over ranked opponents before the start of conference play for the first time in school history. Gonzaga touts the nation’s strongest body of work and has been the No. 1 ranked team in every AP poll. According to longtime Syracuse head coach Jim Boeheim, this team can only be stopped by COVID-19 or an injury. “I don’t think anyone can beat Gonzaga,” Boeheim said. “I’ve never seen a team [so far ahead] since UCLA when John Wooden was there.”

Success has been the standard for as long as Few has been the head coach in Spokane, but this year’s team has found new ways to experience it.

On offense, Few has ratcheted up the pace to a new level. Through games of Jan. 24, only one team in Division I2 averages quicker offensive possessions than Gonzaga, which spends 14.2 seconds a pop. By KenPom’s adjusted tempo metric, Gonzaga is playing at its fastest level in any season for which data is available.3 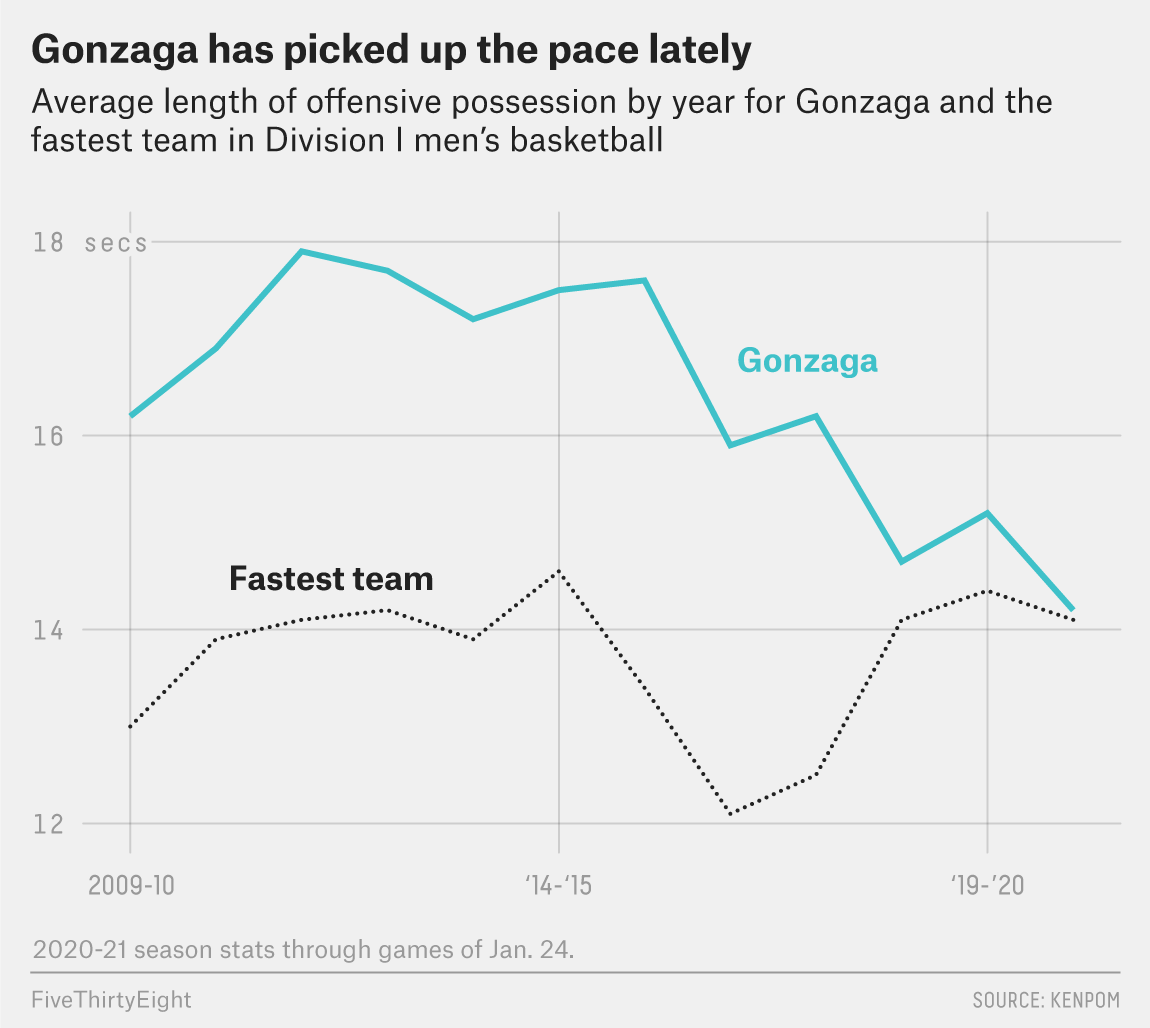 Gonzaga lives at the rim, where a 51.9 percent of team field goal attempts come, good for second-best in the nation,4 according to Hoop-Math.com. Largely behind Drew Timme, one of the top bigs in the country, the Bulldogs score 71.9 points in the paint per 100 possessions, which is the most by any team in the past three seasons, according to CBB Analytics.5

On defense, Gonzaga is generating a ton of turnovers. Given the team’s elite half-court offense, these serve as additional opportunities to blow open the scoring margin. Gonzaga scores 27 points per 100 possessions off turnovers, the 27th-most of any team in the country. Opponents have a turnover rate of 20 percent, which would be the highest rate forced by a Gonzaga defense since 2013. Jalen Suggs ranks 20th in steal rate; Gonzaga hasn’t had an individual defender finish the season ranked in the top 100 since 2013. Behind Suggs, Gonzaga has a team steal rate of 10.9 percent, also the team’s highest mark since 2013.

As the team’s first-ever No. 1 preseason ranking suggested, Gonzaga’s roster is loaded. Three players — Corey Kispert, Suggs and Timme — are listed on the midseason Top 25 list for the Wooden Award. Suggs is on track to be the second one-and-done player Few has had,6 with some analysts having him in the running for the No. 1 overall pick. That last part can’t be overstated: In an era where some NBA teams are fielding younger starting lineups than colleges and it’s increasingly rare for top-level players to stick around on college campuses, Few has achieved the best winning percentage (0.832) of any active coach with a lone one-and-done player to his credit.

Suggs is no ordinary player. He was the highest ranked recruit in school history, and his first college basket was an alley-oop (on which he earned a technical foul). “He’s been given the keys to the offense, kind of told, ‘Here you go, drive the Cadillac,’” Kispert told The Athletic.

That offense is pretty good. If the season ended today, Gonzaga would have the eighth-highest adjusted offensive efficiency that KenPom has tracked since 2014-15.

And looking squarely at the Jan. 25 mark of every season since 2012, Gonzaga’s adjusted efficiency margin ranks fifth. Three of the four teams with a higher mark went on to reach at least the Elite Eight, with one7 cutting down the nets.

According to KenPom, Gonzaga has no worse than an 85 percent chance to win each remaining game on its schedule, so there’s a 65.6 percent shot that the Bulldogs could be the sixth team since 1976 to finish the regular season undefeated.

The unfortunate footnote of any Gonzaga season is that for some, it means little unless Few wins a national championship. Seemingly every year involves Gonzaga romping through its conference schedule before falling short in March. But the Bulldogs added a new wrinkle this season by blasting its way through a brutal nonconference schedule behind an aggressive, turnover-forcing defense and a run-at-all-costs offensive ethos. College basketball’s measure of consistency is once again setting the standard in the sport and is perhaps on a path to a trophy it’s never held.