The Weekly Standard’s Michael Goldfarb accuses me of inconsistency in a cleverly-entitled blog entry called “Search for a Silver Lining”:

Silver acts as though this decline was a foregone conclusion. As the title of his post reads, “Yes, Obama’s Approval Ratings Are Declining. What Did You Expect?” But back in January, Silver seemed to expect that Obama’s numbers would rise — not fall. Silver wrote on January 18, “My guess is that when Gallup comes out with its first post-inauguration approval ratings for Obama later this week, it will show him with about 76 percent approval.” That didn’t happen, instead Obama’s approval fell to 62 percent.

Obama’s numbers put him right about where you’d expect based on historical precedent — which is worse than Silver expected. It seems disingenuous for Silver to now claim that “this is all completely predictable” and that the only conclusion these numbers justify is that “most Americans support most parts of Obama’s agenda.”

Goldfarb is taking my allegedly inconsistent statement out of context, as would be obvious if he’d … provided the context:

Barack Obama has an excellent chance to exceed Kennedy’s numbers. The Pollster.com averages show that 70 percent of Americans have a favorable impression of Obama versus 16 percent unfavorable. Although favorability ratings aren’t the same thing as approval ratings, they tend to closely track one another. Also, it appears that there may typically be something of a bounce in an incoming president’s approval scores immediately after his inauguration, so Obama’s numbers may (temporarily) get even better.

My guess is that when Gallup comes out with its first post-inauguration approval ratings for Obama later this week, it will show him with about 76 percent approval, 11 percent disapproval and 13 percent uncertain, which would indeed be the best numbers on record for a newly-elected president. At the very least, Obama is virtually assured of starting out on better footing than his two immediate predecessors in the White House, as Bill Clinton had emerged victorious in a three-way race in which he got just 43 percent of the popular vote, and George W. Bush’s disputed victory in 2000 had come only after weeks of uncertainty and litigation.

It’s true: I expected to see a bounce in Obama’s approval ratings in the immediate aftermath of his inauguration. In fact, I expected to see a somewhat larger bounce that Obama actually experienced. I certainly did not, however, expect Obama’s numbers to continue increasing after the inauguration bounce, and once he began to roll out his agenda. I don’t see how an honest reading of my January 18 article would have inferred that.

More recently, in fact, I had written that Obama’s approval ratings were almost certain to get worse, at least in the medium term:

On balance, the public seems prepared to be pretty darned patient with Obama. The question is whether public will in fact be as judicious as it expects itself to be after some number of additional months of dire economic headlines. On that front, I’m a bit skeptical, and I’d expect Obama’s approval rating to lose a couple of points each month until the recession ends. This is why it makes a lot of sense for Obama to be pursuing a very ambitious agenda right now. If the economy recovers within the next year or so — beating voters’ expectations — then Obama’s approval ratings will probably wind up being quite high. But until that recovery occurs, Obama’s approval ratings are likely to get worse before they get better.

There are now two significant drags on Obama’s approval. One is the economy: even though most people mostly blame Bush for the economic crisis (or more apolitical forces like the banks themselves), with each day that passes during the contraction, more people are going to get frustrated and begin to blame Obama, in whole or in part. My impression is that Obama’s approval ratings are likely to follow one of the following three general paths, depending on how quickly the economy recovers: 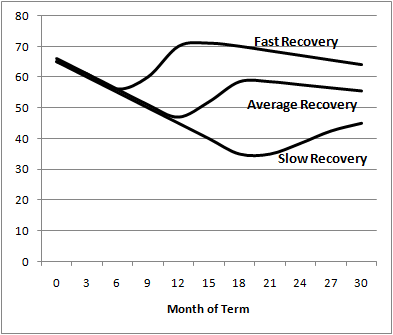 Now, if the White House is thinking about these things the same way that I am, they’ll figure that there’s no time to lose in rolling out their agenda: this is the very probably the best policymaking window they’ll have until the economy recovers, and if the recovery is slow in coming, it might be the best policymaking window they’ll have at any point in the term.

Indeed, the White House does seem to be thinking along these lines, as they’ve started the ball rolling on health care, cap-and-trade, the budget, stem cell research, Iraq, and virtually every other significant piece of their agenda.

And this brings us to the second significant drag on Barack Obama’s approval ratings: the public isn’t universally enamored of his agenda, which he’s now put front and center. On this point, I’m in superficial agreement with Goldfarb, Schoen and Rasmussen. Obama’s approval rating would be higher if he hadn’t tried to do anything substantive. Most of the public agrees with most of the agenda, but certainly not a 65 or 70 percent supermajority.

But a president’s goal is not to maximize his approval rating; it’s to maximize the amount of policy that he’s able to push forward over the balance of his term. Obama is using a lot of his political capital now in order to try and push forward a lot of agenda — but this, I would argue, is wise, because otherwise some of that political capital will evaporate anyway owing to the economy.

It’s a risky play to be sure, and it will be fascinating to watch. But with the White House having made that choice, the fact that Obama’s approval rating has responded in the way that it has is utterly unsurprising, especially given the underlying drip-drip-drip of the economy.