Happy Thanksgiving, everyone. Let’s have some Turkey Day fun.

OK, first, I recommend the timely analysis by Political Calculations, which has tracked domestic turkey production over the past 20 years. Below is a figure they generated from the National Turkey Federation: 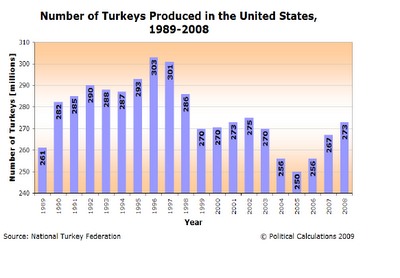 According to this site, annual turkey consumption per capita of about 18 pounds has been relatively steady, but still is dwarfed by how much pork (50 lbs per person annually), beef (63) and chicken (84) we consume. The top five turkey producing states, in order, are Minnesota, North Carolina, Arkansas, Missouri and Virginia (I thought they were the ham state!). The top three producing companies are Butterball (no shocker there), Jennie-O Turkey Store, and Cargill. We also learn that the average weight of a turkey at slaughter is about 28 pounds, and that a standard turkey splits about 70 percent white meat and 30 percent dark.

Meanwhile, somebody call John McCain with a turkeybarrelling alert. According to an article by Daniel de Vise in today’s Washington Post, the U.S. Department of Agriculture has authorized a grant of $908,000 to Virginia Tech and the University of Minnesota–flagships of two of the top-5 producing states, so that makes sense–to decode the DNA of Meleagris gallopavo, the domestic American turkey you just ate today. (DNA for cows, pigs and chicken have already been mapped.)

If ever there were a candidate for genetic engineering, surely it is the pale, flavor-challenged bird that will adorn millions of American dinner tables Thursday as a matter of Thanksgiving ritual.

And here is a reason to give thanks: The day of the super-turkey might be nigh…

The possibilities for genetic manipulation seem endless. At a minimum, the turkey might be genetically engineered to convey a bit more flavor. And turkeys aren’t the most comely of birds. Could they be bred for better looks as well as taste? How about a turkey that arrives pre-stuffed or packed with extra endorphins to pacify a dysfunctional family? Or thighs thick enough for the NFL?

“For me, it would be gigantic Earl Campbell legs,” said Damian Salvatore, chef and owner of Persimmon Restaurant in Bethesda, alluding to the former football great. “If they could get some of that leg taste into the breast, that would be perfection to me.”

University scientists say genetic mapping will help turkeys lead healthier lives….But this is not all about the interests of the turkey. One goal of genetic mapping is to identify genes that might produce larger breasts or plumper legs — potential breakthroughs for the diner and the Renaissance Fair vendor, to be sure, but without much payoff for the bird.

What else? Oh, here’s the menu for today’s Thanksgiving Dinner at the White House for the president and 50 invited guests: