Let’s take something of a 30,000-foot view on the condition of General Motors. The chart below details GM’s operating margin — its profits divided into its revenues — over the past 50 years: 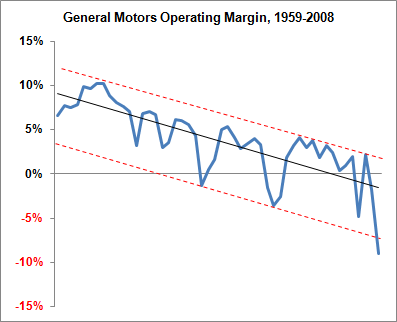 I haven’t provided the dates on the chart because they aren’t important. The auto business is highly cyclical because consumers are buying expensive assets that last for years at a time. Nobody ever really has to buy a new car (they can buy a used one if their car breaks down), and therefore consumers are willing to hold on to their existing vehicles and wait out economic slumps. You can’t do that with, say, a loaf of bread, or even something like a cellphone, which has a much shorter lifespan.

But you knew all of that already. The remarkable thing is that, once you account for the economic cycles, the trend for GM is exceptionally steady — an exceptionally steady trend downward. There were still bad times thirty years ago — but they weren’t bad enough to threaten GM’s survival, and conversely, the good times were much better. These are General Motors’ operating margins by decade:

If I were an alien beaming down from Rigel-3 looking at this pattern — an alien with an MBA degree — my first guess is that it would reflect some sort of systemic problem, some chronic imbalance that magnified over time. Something, in other words, like the costs of GM’s retiree pension and health care programs. It’s difficult to get a precise figure on these so-called legacy costs, but they averaged about $7 billion per year between 1993 and 2007 and are probably at least $10 billion per year now. Considering that GM has never made as much as $10 billion in profit in a year and that its entire operating lossses in 2008 were $13.8 billion, you can see why this is a significant problem.

Of course, GM benefited by promising its employees access to lucrative retirement programs — it benefited by being able to pay less to those employees in the form of salary. But whereas the benefits to GM came long ago, the costs come now. This, indeed, is the entire crux of the problem, as is cogently explained by this Washington Post article from 2005:

GM began its slide down the slippery slope in 1950, when it began picking up costs for medical insurance, pensions and retiree benefits. There was huge risk to GM in taking on these obligations — but that didn’t show up as a cost or balance-sheet liability. By 1973, the UAW says, GM was paying the entire health insurance bill for its employees, survivors and retirees, and had agreed to “30 and out” early retirement that granted workers full pensions after 30 years on the job, regardless of age.

These problems began to surface about 15 years ago because regulators changed the accounting rules. In 1992, GM says, it took a $20 billion non-cash charge to recognize pension obligations. Evolving rules then put OPEB on the balance sheet. Now, these obligations — call it a combined $170 billion for U.S. operations — are fully visible. And out-of-pocket costs for health care are eating GM alive.

GM was willing to cut its employees some very attractive deals in the 1950s through the 1980s — provided that they took them in the form of retirement benefits rather than salary, which wouldn’t hit GM’s books until much later and which until 1992 weren’t even required to be carried on its balance sheets all, making its financial statements (superficially) more appealing to its shareholders. That health care costs have risen so substantially in the United States have made a bad matter worse.

This issue is wrongly portrayed by both the liberal and the conservative media as one of management versus labor, when really it is a battle between General Motors past and General Motors present. In the 50s, 60s and 70s, everyone benefited: GM and its shareholders got the benefit of higher profit margins, and meanwhile, its employees benefited from GM’s willingness to cut a bad deal — for every dollar they were giving up in salary, those employees were getting a dollar and change back in retirement benefits. But now, everyone is hurting.

Nor does this provide for much in the way of solutions. The retirees might have benefited from GM’s short-sightedness — but they also worked hard Monday through Friday every week of in expectation of receiving the benefits that GM had promised them. From the standpoint of fairness, it would be much better to require GM to take the hit — but there isn’t much of GM left to punish, as its outstanding retiree obligations exceed its market capitalization many times over, and as the decision-makers who led GM into this position left the company decades ago. Today’s employees at GM, and the unions that organize them, likewise don’t have anything much to do with the problem — most of the excess costs it requires to produce a Buick versus a Toyota come in the form of legacy costs, not what those employees are receiving in salary and benefits today. And the taxpayer is bound to to get screwed either way, either picking up the tab to bail out GM, or bearing the costs of the pension programs, which are guaranteed by the government (although the legacy health benefits aren’t guaranteed).

Policy-makers, finally, share in the blame too. General Motors might be the latest casualty of the distorted incentives created by our employer-based health care system. Meanwhile, the government would probably improve incentives by providing a more generous Social Security guarantee in lieu of guaranteeing private pension programs. The whole idea of Social Security is that people do an inadequate job of saving when left to their own devices. But companies, even companies as big and proud as General Motors, are overly concerned with the present as well.