Buried in the cross-tabs of the new NBC/Wall Street Journal poll is a question that takes a temperature reading of Glenn Beck. Beck actually makes out pretty well. While just 24 percent of Americans have a favorable view of him (13 percent strongly so), only 19 percent have an unfavorable one (14 percent strongly). That leaves 57 percent who either don’t know Beck or are indifferent toward him.

This compares quite favorably to, for example, Rush Limbaugh, who was the subject of a similar question in the NBC/WSJ poll in June. Limbaugh was regarded favorably by 23 percent of Americans, but unfavorably by 50 percent — including 37 percent who held a strongly negative view. This is not a new problem for Limbaugh, incidentally, who has been roughly this unpopular since at least 1995. 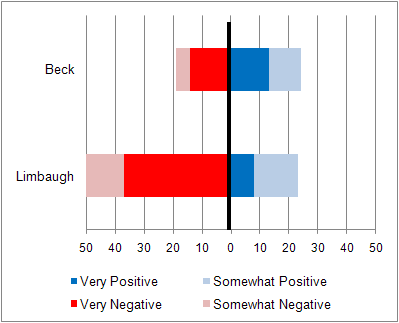 Of course, as Glenn Greenwald points out, Beck’s philosophy is neither particularly self-consistent nor particularly intellectually coherent. But since when, exactly, did that matter in American politics? Most voters, whether they consider themselves liberal or conservative, have a haphazard, inconsistent, and somewhat fluid set of views, which are not so easy to reconcile with the tenets of political orthodoxy. Nor is it so clear that traditional (circa 1980-2006) American conservativism is particularly more self-consistent — why, for instance, does it tolerate government intervention in the bedroom, if it considers it so imperative that government stay out of the boardroom?

Beck is a PoMoCon — a post-modern conservative. And his philosophy is not all that difficult to articulate. It borrows a couple of things from traditional American conservatism:

— It shares an extreme distrust for government, particularly the Federal Government.
— It shares the notion that American society is in some sort of state of existential decline.

On the other hand, it also features some important differences:

— It is much more distrustful of non-governmental institutions, such as labor unions, corporations, political parties, community groups, the media, and scientific institutions.
— It is largely indifferent toward ‘social issues’.
— It is much less explicitly aligned with the Republican Party.
— It has much less use for elites, which it also distrusts.

The PoMoCons are not so much less self-consistent as they are less concerned with consistency, as compared with traditional conservatives. Theirs is a bric-a-brac, skeptical (sometimes to the point of paranoid), play-it-by-ear, relatively spontaneous reaction to the here-and-now — not something cooked up by a K Street thinktank. There is no future, no past — there is only today. And today is a pretty good day to be Glenn Beck.