On Monday, I wrote about a recent Ipsos/Reuters survey of Americans’ interest in the World Cup. The poll showed only 6 percent of respondents plan to follow the tournament closely. But the survey was conducted exclusively in English, and, as my article discussed, that can produce questionable results.

My research also led me to a separate but related question: What are Americans’ attitudes toward soccer generally? It turns out that’s a difficult question to answer; the evidence is scarce and contradictory.

For one thing, there aren’t comparable numbers for the Ipsos poll — no equivalent poll for prior World Cups, nor for other sports or sporting events. We don’t know whether more Americans, when asked the same way, would have said they were interested in the previous World Cup, or in, say, this year’s NBA Finals.

Long-term surveys provide some hints. The Harris Poll has been asking Americans about their favorite sports since 1985. Men’s soccer’s share of sports fans has barely moved since then; it was 3 percent in 1985 and 2 percent last year. Gallup conducts a similar tracking poll, asking about America’s favorite sport to watch: Soccer rose to 4 percent last year from 2 percent in 1981, when Gallup first asked.

The World Cup doesn’t need soccer to be anyone’s favorite sport: Its appeal extends beyond diehards. Unfortunately, Gallup only recently started asking whether its respondents are fans of professional soccer. In 2012, 19 percent said they were, up from 13 percent in a survey fielded around the 2006 World Cup. Those are the only two data points available, though, and the wording of the question — asking about professional soccer — could cloud things, because the World Cup is played between national teams, not clubs.

How about participation? It’s not a perfect proxy, but the more people play a sport, the more are likely to be interested in watching it. Surprisingly, soccer participation has flatlined, according to an annual survey by the National Sporting Goods Association: Just 13.7 million Americans age 7 or older played soccer twice or more in 2012, up by only 3 percent from 2004, even as the U.S. population age 7 and up rose by 6.6 percent, according to the Census Bureau. Then again, at least soccer added players. Baseball, basketball and golf sustained participation declines.

A newer sports-participation survey found a decline in outdoor-soccer players: to 12.9 million in 2012 from 13.7 million in 2007. The survey — sponsored by the Physical Activity Council, made up of seven sports-industry groups — includes all Americans 6 or older who played at least once in the year.

Can those findings be trusted? If you look at other trends the two organizations tracked, there’s reason to wonder. The sporting goods association saw tennis participation growing 11 percent from 2007 to 2012, but it increased less than 1 percent in the activity council survey. And there’s another big reason the participation surveys, like the Ipsos poll, could be selling soccer short: They’re fielded exclusively in English.

Trends from the past two World Cups provide the most optimistic view of soccer’s foothold, but those trends can tell us only so much. The U.S. television audience for the 2010 World Cup grew 19 percent from 2006, the biggest increase of any market measured by Fédération Internationale de Football Association. But that increase won’t necessarily continue this summer, especially if the U.S. team doesn’t escape its tough group.

U.S. relative search volume increased by 16 percent for the World Cup in 2010 compared to four years earlier, but Google search activity for soccer has been on a downward trend since. 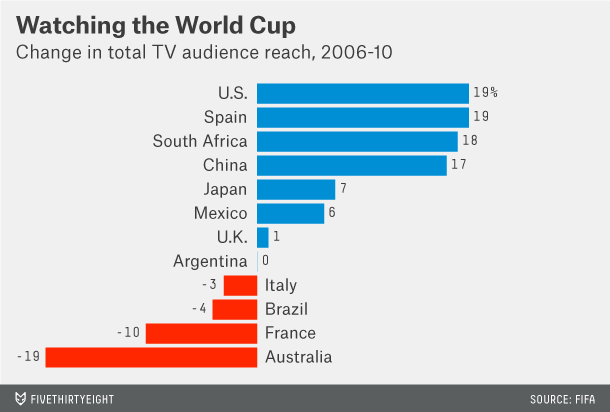 Web-traffic activity is incomplete. ComScore, an Internet analytics company, has data going back only to a few months after the 2010 World Cup. And it’s unclear what to make of trends in the years between tournaments. For instance, average monthly unique visitors to FIFA.com rose by 84 percent in 2013 from a year earlier — but that might represent interest in qualifying matches or in the World Cup draw, rather than an actual increase in U.S. soccer fans. Traffic to Major League Soccer didn’t budge during that period.

So when it comes to soccer’s popularity, it’s clear that more research is needed.