Based on the polling out through Saturday evening, Newt Gingrich had become a clear underdog to Mitt Romney in the Florida primary. But you could at least make the case that the downward trajectory in Mr. Gingrich’s polling had stopped, leaving open the possibility of a last-minute comeback.

Now, that case has become much harder to make. Four polls released Sunday morning — from NBC News, Mason-Dixon, American Research Group and Rasmussen Reports — each give Mr. Romney a double-digit advantage in Florida. 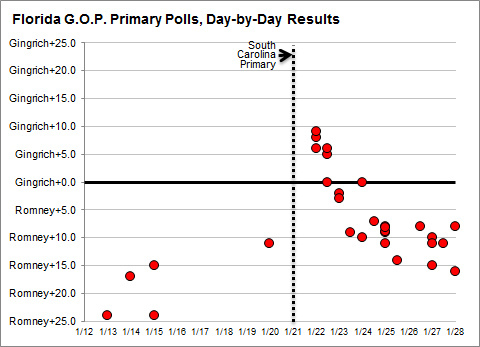 The FiveThirtyEight forecast now projects a 13-point victory for Mr. Romney in Florida and gives Mr. Gingrich just a 5 percent chance of winning.

None of these polls, it should be said, reflect Herman Cain’s endorsement of Mr. Gingrich — although it seems very doubtful that it will be worth anything close to 13 points to him. Still, there should be a couple more polls out between now and Tuesday that could potentially detect any favorable momentum for him.