In Wednesday’s Florida polling update, I wrote that it seemed reasonably clear that Newt Gingrich’s momentum had stalled out in the state. And you could make a pretty good case that the trend had actually reversed itself, and that polling now appeared to favor Mitt Romney again.

Now that case is even clearer. Three polls released since the last update — from Rasmussen Reports, InsiderAdvantage and Monmouth University — each show Mr. Romney with a lead in Florida by margins of seven to eight percentage points. These join two previous polls — from CNN and the American Research Group — that detailed their results by the date of the interview, and found Mr. Romney leading Mr. Gingrich among respondents surveyed after Monday night’s debate. 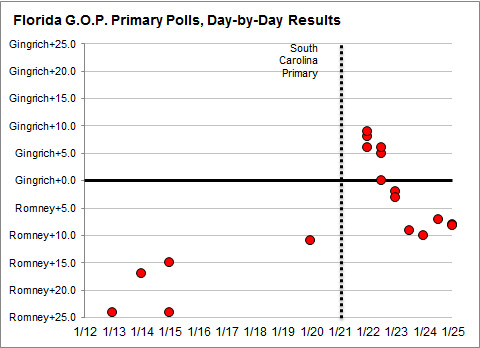 In other words, there’s not really a lot of question about what we’re seeing: Mr. Romney probably holds the polling lead right now. The FiveThirtyEight forecast model puts his lead at four to five percentage points.

That Mr. Romney leads now, of course, would not preclude another shift back to Mr. Gingrich, and it’s easy enough to envision how this might unfold.

First, Mr. Gingrich would need to perform strongly in Thursday’s debate. Previous debates have produced overnight shifts of 10 or more points in the polls, so a single-digit lead for Mr. Romney is not safe.

One can probably assume that Mr. Romney — who seemed to draw blood by going negative on Mr. Gingrich in Monday night’s debate — will adopt the same strategy again Thursday night. Although Mr. Romney’s attacks were not especially well delivered on Monday, he did a good job of reinforcing the lines of attack — in particular, over Mr. Gingrich’s ties to Freddie Mac and his resignation from the House of Representatives — that Florida voters are seeing on the airwaves.

The question for Mr. Gingrich is whether he can maintain his own focus in Thursday’s debate, striking the right balance between defending himself and attacking Mr. Romney, without creating too many conflicting story lines that could be hard to manage in the spin room.

Second, Mr. Gingrich could benefit from pulling closer to even with Mr. Romney on the Florida airwaves, and here there is some good news for him. So far, the pro-Gingrich “super PAC,” Winning Our Future, has spent little of the $6 million that it is set to spend in Florida. As those dollars turn into advertising impressions, Mr. Gingrich may achieve something closer to advertising parity with Mr. Romney (and pro-Romney super PACs) in the closing days of the campaign.

One hopeful sign for Mr. Gingrich is that national polls have not yet begun to shift back toward Mr. Romney. Instead, Mr. Gingrich led by six points in Thursday’s Gallup tracking poll of Republican voters — up from three points on Wednesday. The tracking poll may very well be a lagging indicator — some of its interviews date to the weekend. But it could also be a sign that Mr. Gingrich has been affected by the uneven distribution of advertising in Florida, since advertisements sometimes produce highly localized and short-term shifts in the polls that can rectify themselves quickly.

Still, Mr. Gingrich has a whole host of negative stories to deal with, and a middling-to-poor debate performance could lead to death by a thousand cuts. Although Mr. Gingrich could still easily win Florida, he could just as easily lose there by double digits.