When the Milwaukee Bucks drafted Giannis Antetokounmpo with the No. 15 overall pick in the 2013 NBA Draft, so little was known about the international man of mystery that draft reaction around the media landscape had two different spellings of his name: Antetokounmpo and Adetokunbo.1 Then 6-foot-9 after growing 3 inches in the year leading up to the draft, Antetokounmpo was rail-thin at 196 pounds, and it seemed that the Bucks had swung for the fences with one of the highest-variance picks in recent memory. He was compared to everyone from Thabo Sefolosha to Scottie Pippen and Nicolas Batum to Kevin Durant. Seriously.

Nearly seven years later, it’s difficult to argue that Antetokounmpo hasn’t maxed out his potential. But that doesn’t mean those post-draft prognostications were wrong. It did take Giannis a few years to make it clear that the Bucks had really hit a home run with his selection, and a few more for him to blossom into a full-fledged force capable of dominating every single game on both ends of the floor.

He’s done that by improving in just about every area of the game, just about every single year. Antetokounmpo’s usage rate has risen with each passing season, and his assist rate has done the same in every season but one. This year, he’s at a career-high 37.5 percent usage, tied for the top mark in the NBA. He’s shooting and making more three-pointers than ever before, having already hit a new career-high for made threes in a season. He’s also at a career-high 32.7 percent assist rate, making him one of only eight players in the league exceeding 30 percent in both categories.2

In response to his consistent and rapid improvement, the Bucks have entrusted him with a larger and larger share of responsibility in just about every season. His transformation has been gradual: He has gone from being a 6-foot-9, 196-pound ball of clay to a 6-foot-11, 242-pound point forward who is both the best in-the-paint scorer since Shaquille O’Neal and a dynamic, dominant playmaker. He now has almost complete control over the Milwaukee offense, which, not coincidentally, is one of the best in basketball.

With the help of Second Spectrum tracking data on NBA.com,3 we can quantify exactly how much responsibility Antetokounmpo has borne for his team’s scoring prowess, year by year. To do this, we’ll use a metric I call Creation Rate, which measures exactly what it sounds like it measures: the percentage of his team’s points that a player creates4 — whether by scoring or assisting on them — when he is on the floor. For example, if Giannis scores 30 points and has five assists, two of which result in three-pointers, he’s created 42 points. In a game where the Bucks score 80 points when he is on the floor, he would have a Creation Rate of 52.5 percent. 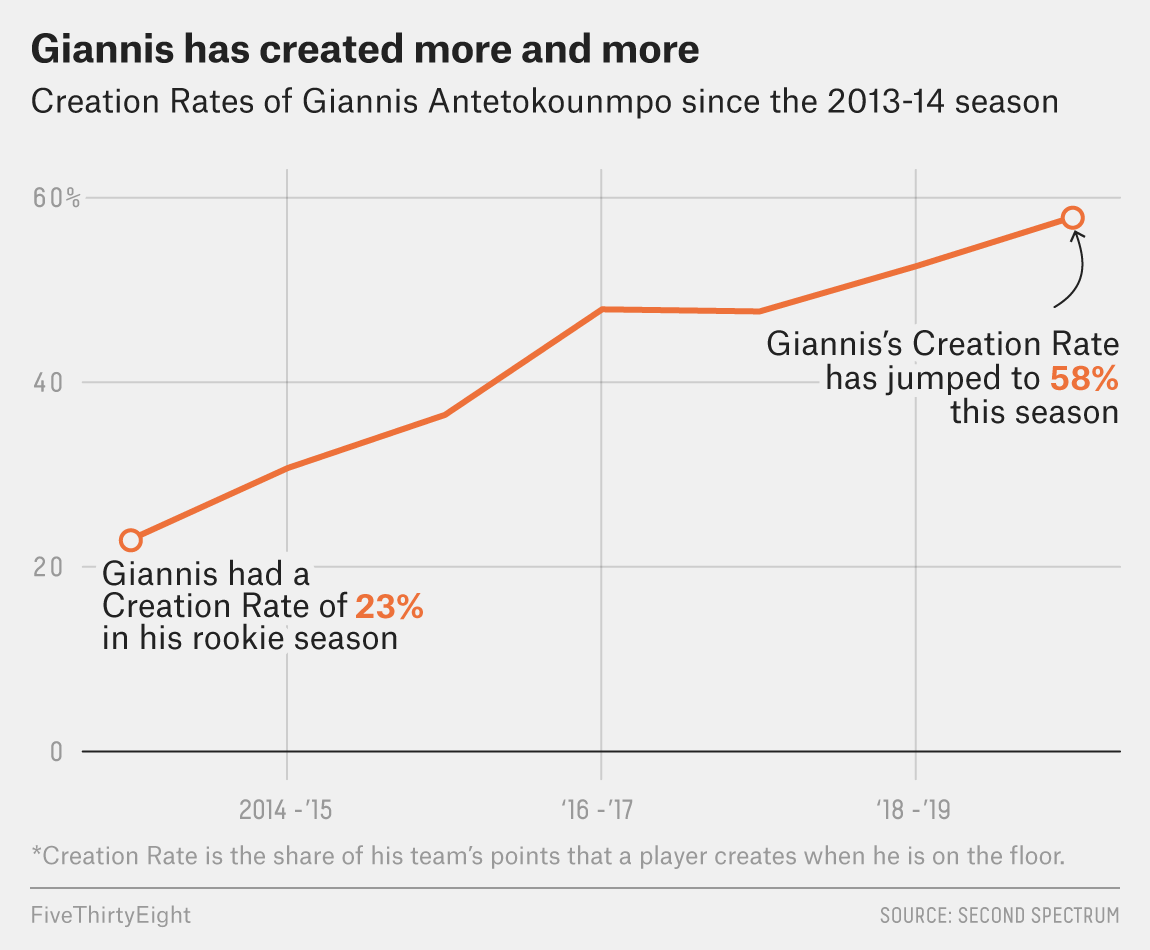 If a Creation Rate of 57.8 percent sounds like a lot, that’s because it is. Only four players5 have a higher mark this season: Luka Dončić, LeBron James, James Harden and Trae Young. Giannis’s 2019-20 season is also one of only 22 individual seasons during the player-tracking era in which a player has registered a Creation Rate of at least 55 percent.

Taking a look at this list, one thing you might notice is that the same names keep appearing over and over. Harden and Russell Westbrook each take up five of the 22 spots, while James has four, and John Wall has three. That’s four players who are responsible for 17 of the 22 seasons with a 55-plus percent Creation Rate. Given their roles in their teams’ respective offenses, it’s not surprising to see them on the list, but it also highlights a difference between Antetokounmpo and the other elite creators: They’re all primary ball-handlers for their team, while Antetokounmpo is not.

With the exception of LeBron during the 2016-17 season (when he was still playing with Kyrie Irving), every player on the list except for Antetokounmpo led his team’s high-minute players in Time of Possession Rate.6 It should come as no surprise, then, that among the above group of 22, Antetokounmpo’s Time of Possession Rate of 14.9 percent ranks last. To do all that point-creation despite having the ball far less often than his peers is a wildly impressive feat.

Perhaps the scariest thing about all this is that Giannis’s numbers in these areas could be even better.

First of all, he is shooting a career-low 61.5 percent from the free-throw line, on more than 10 attempts per game. He shot 72.9 percent last year and was a 74.2 percent shooter for his career prior to this season. He is, quite literally, leaving free points on the board with his performance at the charity stripe.

And he’s not the only Buck who could be playing even better. According to Second Spectrum, Antetokounmpo’s teammates have an effective field-goal percentage 0.45 percentage points worse than expected off of his passes, which ranks Giannis 90th out of the 131 players who have created at least 250 teammate shots. His teammates’ expected effective field-goal percentage off of his passes puts him 27th among that group, so it’s not as though they are missing the shots simply because they’re too difficult to make. Giannis is just getting unlucky.7

If that luck turns, and if he keeps making the strides he’s made throughout his young career, there’s no telling what heights he might reach next.