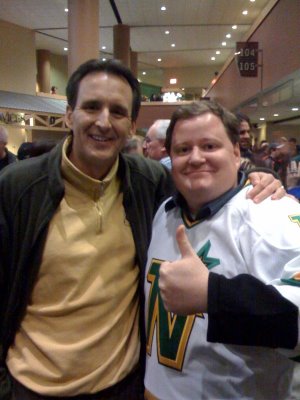 Yesterday, we noted that Tim Pawlenty’s approval ratings, even if we give him a bit of extra credit for being a Republican in a blue state, have been nothing remarkable. He’s no Charlie Crist or Jon Huntsman Jr., someone whose popularity at home clearly points toward some kind of special political acumen. True, almost any “opposite-color” governor of a reasonably large state is someone who is going to get at least a passing thought from his party. But there’s no particularly good reason why, say, Tim Pawlenty is considered a serious presidential candidate and someone like Jodi Rell isn’t.

Since Pawlenty has announced, however, that he won’t seek a third term as Minnesota’s governor, and he seems poised to tip his toes into the Presidential waters instead, let’s take another look at what his strengths might be. Below is a comparison, from exit polls, of Pawlenty’s performance in 2006, when he defeated DFL candidate Mike Hatch by a single percentage point to win re-election, against that of a generic House Republican candidate. That 2006 year was, of course, not a very good one for Republicans: they lost all sorts of key demographics, including independents by a 3:2 margin, en route to losing most of the key races that they were competing in. Palwenty’s narrow re-election was one of the few bright spots for them. Where and with whom did he overperform a generic Republican?

There are a lot of numbers there but, although be perfectly frank, I’m not sure this was quite as enlightening as I was hoping for it to be. But a few interesting things stand out.

Firstly, Pawlenty performed relatively well with young voters. Although he lost the 18-29s, he didn’t lose them badly, and he won Gen X’ers by a solid margin. This may have more to do, however, with the peculiar politics of Minnesota rather than anything in particular that Palwenty was doing. While Minnesota is blue now, it was very blue before, once sometimes thought of as the most reliably Democratic state in the nation. What this implies is that the old folks in Minnesota might be at least as liberal as their younger counterparts.

Likewise, Pawlenty split the independent vote with Hatch — not a bad outcome in a year in which the Republicans lost it by 18 points nationally. But part of that may have been because of the presence of Peter Hutchinson, an independent who won 6.4 percent of the vote. Hutchinson’s vote share, naturally, was large among independents, but exit polls also revealed that about twice as many of his votes came from Kerry voters as Bush voters; he probably cost Mike Hatch the election. (Of course, any Minnesota politician who is hoping to win a race without a third-party candidate mucking things up somehow is making a mistake).

The number I find most interesting here, actually, is Pawlenty’s strong performance among people with children under the age of 18 — he won them by 15 points in a year where Republicans lost them by 4 points nationally. Although some of this may have to do with the age-based demographics in Minnesota that we described above — it’s that 30-44 age range where most people are raising kids — it was nevertheless an impressive performance. And Pawlenty’s performance was particularly good with dads: he won them by 25 points, when Republicans won them by just 2 points nationally.

Perhaps this can be Pawlenty’s elevator pitch: the 30-second (or less) soundbyte that distinguishes him from some of the other, relatively strongly-branded Republican hopefuls like Mike Huckabee and Sarah Palin. He’s Soccer Dad! Or since this is Minnesota, he’s Hockey Dad! Or, since Palin has sort of deflated the Hockey Parent bubble, he’s Curling Dad!

All right, you might be interpreting this as sarcasm. But doing well with middle-aged men is a pretty good attribute for a candidate for the Republican presidential nomination to have. Some 56 percent of the Republican turnout in the Iowa caucuses was male, as was 57 percent in New Hampshire, and 56 percent in both Michigan and Florida. Just as it’s an advantage to have your demographics skew female in a Democratic primary, it’s nice to have them skew male in a Republican one.

Pawlenty is not the only Republican hopefuls with some appeal to the working class — Palin and Huckabee, notably, are big problems for him. So the Hockey Dad schtik alone won’t be enough for him. The Republican presidential field is crowded, but, as I noted in February, it’s least crowded in the dimension of a moderate populist:

Pawlenty’s small opening might come among voters who conclude that Sarah Palin and Mike Huckabee are a little scary (although Pawlenty is an evangelical Christian, he’ll lose if he tries to out-conservative them), but that Charlie Crist and Mitt Romney are a little creepy. If I were him, I might talk a lot about guns — but not so much about God. On an issue like gay marriage, I might take the tack that a lot of the Republican moderates are taking in the New York Senate: don’t necessarily come out forcefully against it, but blame the other side for creating a “distraction”. Don’t be a jingoist, but talk a lot about American jobs and the need to protect them.

It’s going to take a lot of ingenuity for Pawlenty to win the Republican nomination — he starts out with much lower name recognition, and a much weaker brand, than most of his rivals. But that is, I suppose, why he’s decided to take two years off to get ready for the race.