After a spring and summer dominated by domestic issues, namely the implosion of German high-tech exports, foreign policy is rapidly becoming a hot-button issue for the German Federal Elections. Following the controversial air strike called in by a German commander, the growing general discontent with the war has accelerated. Indeed, Germany’s contribution of more than 4,000 personnel to the NATO-led international security force is by far the nation’s single largest military commitment abroad. The question of Germany’s continued participation in the mission prompted Chancellor Angela Merkel, who is running in an increasingly competitive re-election campaign, to call for an international conference on Afghanistan strategy in order to show progress on the issue.

The voting for the Bundestag– considerately scheduled for a Sunday, rather than during the work week — will take place this coming weekend, with more than 60 million eligible voters.

Currently, Germany has a ruling “grand coalition,” where the two largest parties join together to form a government, often with additional smaller coalition partners. Chancellor Merkel’s center-right Christian Democrats (with sister CSU from Bavaria) lead the coalition, along with center-left Social Democrats. The free market (“European liberal”) Free Democrats, the normal coalition partner of the Christian Democrats, are currently the largest opposition party, followed by “The Left,” and the Green Party. 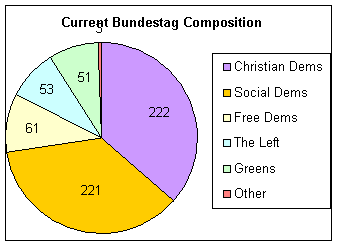 The German election system is called the “mixed member proportional,” where voters cast a ballot for a deputy in a fixed constituency as well as for a party list, which is organized by state (Lander). If a party receives 10 percent of the national vote, they are guaranteed 10 percent of the members of parliament, with the party list “topping up” the number of single districts the party won. There are a total of 299 districts and at least 598 total members, which can be exceeded if there are individual constituencies won by a party that were not reflected in the overall proportion taken in the Lander. There are 13 such seats currently, bringing the Bundestag up to 611.

Polling over the last few months has indicated a fairly entrenched electorate in Germany. Six well known pollsters in Germany have polls out from the last week that are quite consistent between one another, and show only minor changes over the course of 2009.

The bottom line question will be if Merkel’s Christian Democrats and traditional partner Free Democrats can together garner enough seats in the Bundestag to create a coalition that excludes the Social Democrats, Left and the Greens. Similarly, the Social Democrats are looking for a way to remain in power (with the current grand coalition they hold 8 of 16 cabinet ministries), while the Greens, coming of some success in the European Parliament elections, have been mentioned as a possible partner with the Christian Democrats and Free Dems. 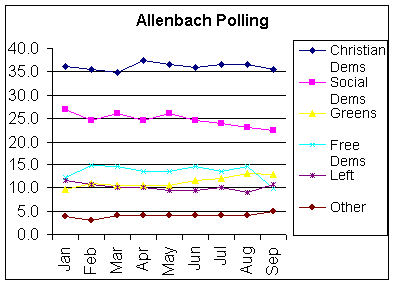 Allenbach polling (strongest numbers for Christian Dems), shows a situation where the Christian Dems, Free Dems coalition will be flirting with the 50% mark, which would be enough to make a center-right coalition. 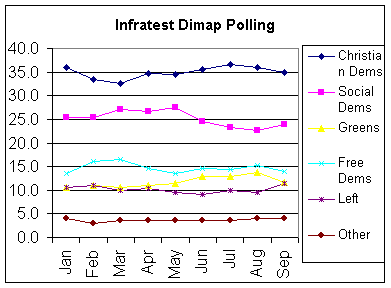 The Infratest Dimap polling has through the year shown stronger number for the Social Dems than the Allenbach polling, which is supposedly a bit more conservative. However, this set of numbers indicates a relatively good chance for the Free Democrats to break 15 percent, which would give the center-right coalition the votes they need even if the Christian Democrats do no better than 35 percent.

Both sets of polling show a weakening of the major parties through the summer and small uptick for the three small parties, indicating the well-reported public fatigue with economic and foreign policy decisions by grand coalition government. 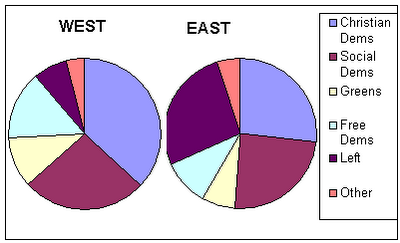 Finally, there is an interesting and important regional component to German politics, particularly at the Federal level. Above we have disaggregated the last Infratest Dimap poll for September into West and East Germany (former GDR). The Christian Democrats are 10 points stronger in the Western portion (37 percent to 27 percent), while the Left party is nearly four times higher in the East (7 percent to 27 percent). The Social Democrats, however, take a similar share in both regions, as do the Greens and Free Democrats.

Given the small margin for error for Angela Merkel and the leading Christian Democrats, burying the Afghanistan issue and trumpeting the (slow) recovery of German exports will be the main strategy of this week. The final push will likely not raise any new major issues, but additional polling at the end of the week will give an indication of whether the left-side small parties have cut into the major party shares any further. Merkel is likely to emerge as chancellor again either way, but whether she has to again build a grand coalition rather than the preferred center-right government is the key question.
—
Renard Sexton is FiveThirtyEight’s international columnist and is based in Geneva, Switzerland. He can be contacted at sexton538@gmail.com