9:04 EST [Nate]: A disappointing night for Democrats. On November 4th, Democrats became the de facto ruling party … circa 2006 or so, the Dems got very good at figuring out what sort of messaging works when you’re in the minority, but that’s very different from the sort of messaging you have to do when you’re in the majority. There’s going to be a temptation in some circles to write this one off to poor African-American turnout or whatever, and that certainly is a large portion of the story. But I think the Democrats need to think carefully about what went wrong here as they begin to gear up for 2010.

9:01 EST [Sean]: CNN has called the race. We think when it’s all said and done Martin will lose by around 10 points. We’re headed over to the Martin gathering, that’ll do it for me tonight. 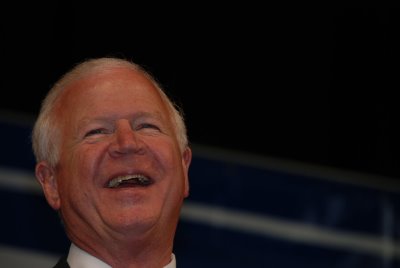 8:40 EST [Sean]: From where I sit, this is looking pretty pessimistic for Jim Martin. The gap is 250,000 votes with over 1,000,000 in. We know that Fulton County hasn’t reported the heavy African-American precincts yet, but I’m also surprised the race hasn’t been called yet.

8:40 EST [Nate]: Well, I’ll say this … this race looks to be sufficiently nonclose that Obama is looking fairly smart for staying away from the state.

8:33 EST [Nate]. Most of Cobb County in … Chambliss won by 10.9 points on Election Day, winning by 27.6 points tonight. And turnout is fairly high there. Now, it may be the case that even within a given county, the more rural, redder areas tend to report first … but … frankly, I’m not sure why this hasn’t gotten called yet.

8:29 EST [Nate]: But even in DeKalb, Martin’s margins are materially off what they were on Election Day. On the other hand, turnout looks to be at a pretty good clip there.

8:20 EST [Sean]: The numbers look ominous from what’s in. On the other hand, DeKalb and Fulton aren’t in, and we’re hearing that there are good numbers there. If the gap gets to be 200,000 before those counties report, however, that’s probably all she wrote for Martin.

8:19 EST [Nate]: Sean should have more detail in a moment, but the reason this hasn’t gotten called yet is because there’s basically nothing in from the Democrat-heavy counties in Atlanta or the black belt. Martin, however, is going to need to do a lot better in those counties than he is elsewhere in the state, overperforming his November 4 margins and/or getting proportionately greater turnout than Martin is getting in red counties. But we’re in hail mary territory at this point, at least from where I sit.

8:01 EST [Nate]: I haven’t found a single county with a significant percentage of the vote in where Chambliss isn’t performing better than he did on November 4. This looks like a 14 point win for him or something.

7:54 EST [Nate]: Gwinnett County: Chambliss won by 10.8 points on November 4, winning by 28.9 points so far tonight. Don’t see how in the world this is happening for Martin.

7:50 EST [Sean]: For those following on the Georgia Secretary of State’s site, those numbers can appear to be fully in (i.e., 7 out of 7 precincts reporting), and may still change. So keep an eye on that.

7:45 EST [Sean]: Per reports in the field, long lines in Savannah were only just finishing up.

7:44 EST [Nate]: You’re in a better position than I am to know, Sean, but this looks like a good night for Chambliss so far. Take Whitfield County, for instance, which has 12 of its 25 precincts counted so far. Chambliss won that county by 31.3% on November 4, but he’s winning it by 40.6% so far tonight. Those results appear to be fairly typical. If you’re really scraping for good news for Martin, turnout is pretty light in Whitfield at least, extrapolating out less than 40% of November 4’s numbers.

7:39 EST [Sean]: As of three weeks ago, 174 unpaid veteran Obama organizers were in the state, and more flooded the state in the final days. Estimates put the number of experienced Obama organizers at over 300.

7:33 EST [Sean]: The polls have closed in Georgia, including in two Fulton County that stayed open half an hour later. In the very earliest returns Saxby Chambliss has opened with a large percentage lead. That might hold, but until we get Fulton and DeKalb results we’re not going to know for sure. 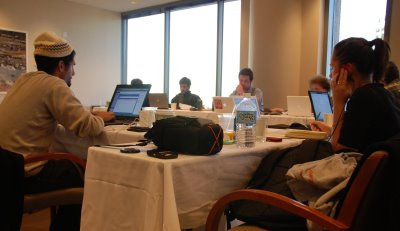