Let’s take a look at a graph. This is the graph that you would have seen in 1975 if you had evaluated average global surface temperatures over the 50 years from 1925 through 1974: 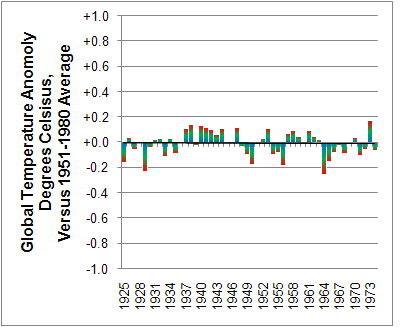 Do you see a cooling trend here? Certainly not. In fact, if you draw the graph back further, to the 1880s, you see a modest warming trend: 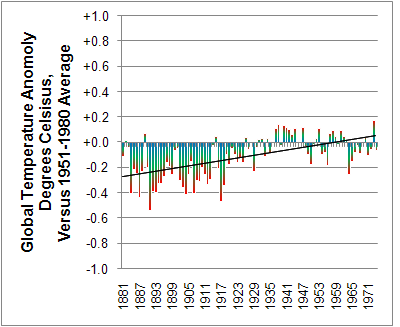 And yet, according to George F. Will, many scientists were convinced in the 1970s that global cooling was a significant threat to the planet. And if those scientists were so wrong before, why should we trust them when they say that global warming is a threat now?

There’s just one little problem with this story, which reappears every so often in conservative discourse on the environment. Specifically, it’s a crock of shit.

Certainly in the 1970s there were a handful of scientists and scientific reports that were concerned about the prospect of global cooling, the mechanism for which was usually given to be the greater number of aerosols — tiny particles — released by man-made pollutants that might concentrate in the atmosphere and block sunlight from reaching the planet’s surface. An even smaller handful of these scientists may have been rather alarmist about the prospect; the media was happy to write cover stories on their proclamations.

At the same time, there was also already concern a about greenhouse effect caused by CO2 emissions that would result in planetary warming. There was a fair amount of debate at the time about which of these two effects — the cooling effects of aerosols, or the warming effects of CO2 emissions — would win out, or the planet would get lucky and stabilize at some sort of equilibrium between the two.

But there was certainly nothing of a scientific consensus, as Will sneakily implies, around global cooling. How could there have been given such underwhelming evidence in the temperature record to support the hypothesis? On the contrary, this was something of an eccentric position to hold, and most scientific papers produced at that time predicted that warming would win out instead.

(You might also have been able to infer this from the fact that Will makes more liberal use of scare quotes in establishing his position than anyone since the poor saps charged with marketing Gigli. “A Hilarious Tour-De-Force!”, says the Tulsa Beacon-Journal.)

And indeed, the scientists who put their money on the warming horse have been right. This is what we get if we look at the 50 years of temperature variation from 1959 through 2008: 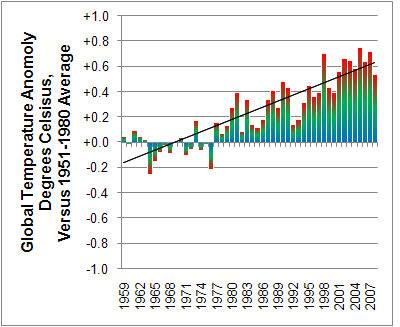 Or running the clock back a little further: 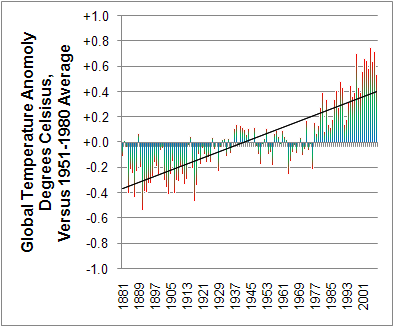 Few credible scientists would be bold enough to question that trend, and in fact, essentially none do.

This is disappointing stuff coming from Will, who has one of the best research staffs on either side of the Potomac, and whom I’ve usually regarded as being fairly intellectually honest.

In fact, more than disappointing, I find it a little depressing, having recently spoken at the TED Conference and having witnessed first-hand some of the terrific technologies that are already extant to mitigate climate change and having heard from some of the entrepreneurs who re-oriented their businesses to make them more sustainable (and increased their profits in the process). That so little progress has been made on climate change and sustainable energy in spite of the overwhelming economic, environmental and national security imperatives to do so is perhaps the single greatest indictment of our democracy.