In a post two weeks ago, our own Andrew Gelman tackled the question, raised elsewhere by Chris Bowers, of whether the generic congressional ballot indicates that the Democrats face serious trouble next year in the midterm congressional elections. Following a summer in which the Democratic advantage on this measure had steadily shrunk, by September the Democrats seemed to stabilize and even recover somewhat; but as Gelman noted, the measure’s predictive value is dubious this far out from election day.

Piggybacking on that post, it is interesting to look at the history of the congressional ballot over a series of cycles, and across time within those cycles. Fortunately, fellow political scientist Charles Franklin of the University of Wisconsin wrote a blog post two years ago with this nice graphic: 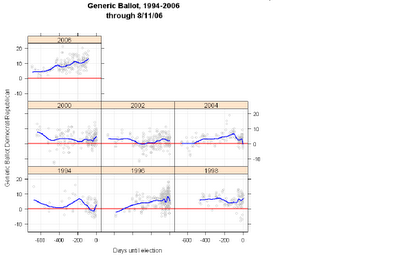 As Franklin pointed out–and Real Clear Politics Jay Cost later reiterated–the Democrats consistently enjoy an advantage. At times the Democratic margin has dipped to zero or slightly below, and at other moments it pushes up closer to 10 points. But, with the exception of the months leading up to the tectonic 2006 election, cycle after cycle the Democrats seem to hover around a range between a 2-point and 8-point lead. This is true in cycles where they did well (e.g. 1998) or poorly (e.g., 2002). For most of the cycle leading up to the actual day when votes are cast, the generic congressional ballot is, well, rather generic.

If you visualize in your mind the gap between the two parties in the above graph, it basically starts around +6 or +7 for Democrats and slowly collapses to around +1 or 0. Comparing that with the trends to the left of the 400-day mark in the seven graphs of Franklin’s figure, the two cycles that most look like 2009 so far are 1994 and 2004. Neither were particularly good years for the Democrats–although it must be said that 2004 was basically a break-even cycle on the House side for Democrats (the significant losses were in the Senate, and if you discount the Texas re-redistricting the House results were essentially a draw), and we all know what happened in 1994. As Andrew noted in his review of the relevant lit, the generic congressional ballot has predictive value in the months closer to the actual election day.

So how is it that a measure can consistently skew towards the Democrats, regardless of whether the cycle turns out to be good for the party or bad? The short and largely correct answer is that generic ballots are not actual ballots, and how one feels about a no-name Democrat running against a non-name Republican is a context-free choice. But I wonder if the persistent Democratic skew of the generic congressional ballot is actually a function of the fact that Democratic-leaning voters are distributed in inefficient ways.

The chart below, which appears in my book, shows the Partisan Voting Index for every congressional district as of 2005–reflecting presidential results in 2000 and 2004 where the country split almost 50-50. The PVI is a measure of the partisan voting for president by congressional distirct, and is arrayed here from left (most Democratic district) to right (most Republican). Though the PVI is a measure of presidential rather than congressional voting, it is in some ways a better partisan measure than the actual votes for congressional candidates because there are many House incumbents who run either literally unopposed or essentially unopposed because they face lamb-to-the-slaughter challengers. 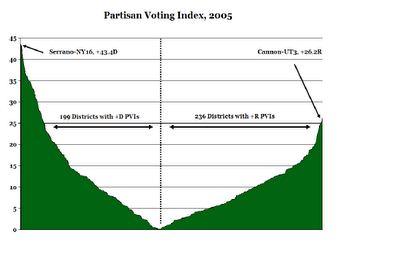 And what you see from the lopsided tilt of the figure is that, at least this decade, Democratic voters are distributed inefficiently. That is, there are too many Democrat-surplus districts compared to the Republican ones. If the generic congressional ballot support is equal for both parties, and Democratic-leaning voters are packed–in part because of racial gerrymandering–into fewer districts, equal poll support can translate into unequal electoral results. In a simplified scenario with five districts and 20 voters, 10 each preferring Democrats and Republicans generically when polled, if the GOPers are grouped 3 each into 3 districts they could elect Republicans to 3 of the 5 seats, with Democrats winning the other two. This, despite parity in the generic ballot survey results.

UPDATE: Charlie Cook contacted me to let me know two things. First, he gently reminded me that the Partisan Voting Index (PVI) is constructed by Polidata on behalf of The Cook Political Report, a proprietary fact I should have mentioned originally. And second, he says that as a rule of thumb he subtracts two points from the Democratic margin in the generic ballot to account for the lopsided distribution of Democratic supporters across House districts. Thanks to Charlie for the nudge and the clarification of his view of the generic ballot.