A couple of weeks ago, we examined the potential upside case for Democrats in November’s midterms. If the party were able to limit their losses to about 20 House seats and 3-4 Senate seats, it might not have as deleterious an effect on their policy agenda as you might think.

But that is the upside case for Democrats. It is not the base case, and it is certainly not the worst case — both of which look as grim as ever. Although I think people may somewhat underestimate the probability of a shift in momentum back toward the Democrats, they may simultaneously be underestimating the magnitude of losses that might occur if momentum fails to change, or moves in the other direction.

For starters, let’s look at the state of the generic congressional ballot. The Real Clear Politics average now shows Republicans with a 2.3 point lead. How does that translate in terms of a potential loss of seats for the Democrats?

Let’s suppose for a moment that, in November, the Democrats lose the national house popular vote by a margin of 2.3 points. It is actually not safe to assume that a 2.3-point deficit in generic ballot polls translates to a 2.3-point loss in the House popular vote — but we’ll get to that ambiguity in a moment.

You might assume that, if a party loses the popular vote in the House, they are unlikely to retain control of the chamber. But it is not quite that simple. For reasons that are somewhat debated, the number of seats that a party controls going into the Congressional election still has predictive power in forecasting the seat count that emerges, even if we take as a given the results of the national popular vote. In particular, the larger a party’s majority going in, the more seats they tend to add or retain relative to their performance in the popular vote.

We can model this by means of a regression analysis on past Congressional elections, where the input variables are (i) the result of the popular vote; (ii) the number of seats that a party controlled at the end of the previous election, and (iii) an interaction term between the first two variables. My model looked at all years since Alaska and Hawaii became eligible to vote for the Congress in 1958 (although weighting recent elections more heavily), but excluding those cycles immediately following redistricting. The losses that this model would project for a given result in the popular vote this year are illustrated below: 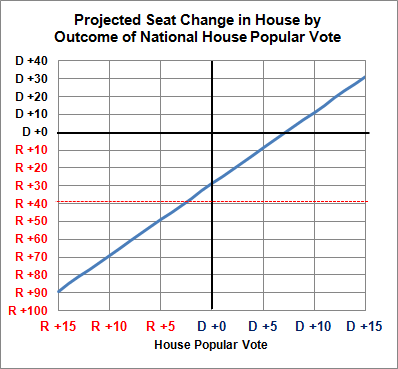 So, for example, if the House popular vote were exactly tied, we’d expect the Democrats to lose “only” 30 seats on average, which would be enough for them to retain majority control. It would take about a 2.5 point loss in the popular vote for them to be as likely as not to lose control of the chamber. So Democrats probably do have a bit of a cushion: this is the good news for them.

Their bad news is that the House popular vote (a tabulation of the actual votes all around the country) and the generic ballot (an abstraction in the form of a poll) are not the same thing — and the difference usually tends to work to Democrats’ detriment. Although analysts debate the precise magnitude of the difference, on average the generic ballot has overestimated the Democrats’ performance in the popular vote by 3.4 points since 1992. If the pattern holds, that means that a 2.3-point deficit in generic ballot polls would translate to a 5.7 point deficit in the popular vote — which works out to a loss of 51 seats, according to our regression model.

These sorts of questions have been the subject of many, many academic studies, almost all of which involve far more rigor than what I’ve applied here. This is just meant to establish a benchmark. But that benchmark is a really bad one for Democrats. One reasonably well-informed translation of the generic ballot polls is that the Democrats would lose 51 House seats if the election were held today.

In my piece a couple of weeks ago, I wrote that there was only a 1 in 10 chance that Democrats would lose more than 55 seats in November. Having now looked at this issue in somewhat more detail, that clearly seems to be a lowball estimate. While there is other statistical and anecdotal evidence that one can point toward that is relatively more favorable to Democrats, and while there are other techniques, like a district-by-district analysis, that could be applied to this problem instead — if you could get 9:1 odds (a 1-in-10 chance) on the Democrats losing more than 55 seats in the House, that would be a good bet.

The point is not necessarily that these are the most likely scenarios — we certainly ought not to formulate a judgment based on Rasmussen polls alone, as the jury is still out on whether the substantial house effect they’ve displayed this cycle is a feature or a bug. But these sorts of scenarios are frankly on the table. If Democrats were to lose 50, 60, 70 or even more House seats, it would not totally shock me. Nor would it shock me if they merely lost 15, or 20. But their downside case could be very far down.