2:43 a.m. | Updated If only women voted, President Obama would be on track for a landslide re-election, equaling or exceeding his margin of victory over John McCain in 2008. Mr. Obama would be an overwhelming favorite in Ohio, Florida, Virginia and most every other place that is conventionally considered a swing state. The only question would be whether he could forge ahead into traditionally red states, like Georgia, Montana and Arizona.

If only men voted, Mr. Obama would be biding his time until a crushing defeat at the hands of Mitt Romney, who might win by a similar margin to the one Ronald Reagan realized over Jimmy Carter in 1980. Only California, Illinois, Hawaii and a few states in the Northeast could be considered safely Democratic. Every other state would lean red, or would at least be a toss-up.

Although polls disagree on the exact magnitude of the gender gap (and a couple of recent ones seemed to show Mitt Romney eliminating the president’s advantage with women voters), the consensus of surveys points to a large one this year — rivaling the biggest from past elections.

The gender gap is nothing new in American politics. Since 1972, when exit polling became widespread, men and women split their votes in three elections: 1996, 2000, and 2004. They came close to doing so on several other occasions. In 2008, for example, Mr. Obama won resoundingly among women, beating Mr. McCain by 13 points, but only won by a single point among men.

The biggest gender gap to date in the exit polls came in 2000, when Al Gore won by 11 points among women, but George W. Bush won by 9 points among men — a 20-point difference. The numbers this year look very close to that.

Since the first presidential debate in Denver, there have been 10 high-quality national polls that reported a breakout of results between men and women. (I define a “high-quality” poll as one that used live telephone interviews, and which called both landlines and cellphones. These polls will collect the most representative samples and should provide for the most reliable benchmarks of demographic trends.)

The results in the polls were varied, with the gender gap ranging from 33 points (in a Zogby telephone poll for the Washington Times) to just 8 (in polls by Pew Research and by The Washington Post). On average, however, there was an 18-point gender gap, with Mr. Obama leading by an average of 9 points among women but trailing by 9 points among men. 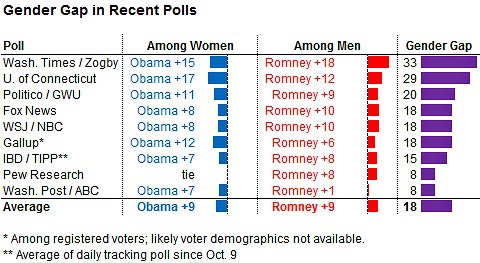 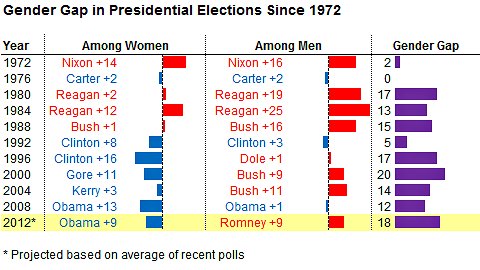 The gender gap has been growing over time. It was nearly absent, for instance, in 1972 and 1976, the first two years that the exit polls tested it.

But after the Roe v. Wade decision in 1973, reproductive rights became a greater focus in presidential elections — particularly under Ronald Reagan in 1980, who was more willing to campaign on the issue of abortion than most of his predecessors. The gender gap jumped to 17 points that year, with men much more likely to vote for Mr. Reagan.

The gender gap has sometimes been widest when there is a Democratic president running for re-election, as in 1980 or 1996 (or a Democratic vice president looking to ascend to the presidency, as in 2000). Women, apart from their tendency to vote Democratic, also seem slightly more inclined than men to give the incumbent party another chance. When the incumbent is a Republican, as in 1976 or 1992, this can mitigate the gender gap. When the incumbent is a Democrat instead, as for Mr. Obama this year, both trends operate in the same direction, making it wider.

If the current FiveThirtyEight forecast were re-calibrated to show an overall 9-point lead for Mr. Obama — his lead among women in polls since the Denver debate — he would be a clear favorite in states totaling 347 electoral votes. Mr. Romney would be favored in states containing just 140 electoral votes. Another 51 electoral votes would be too close to call. 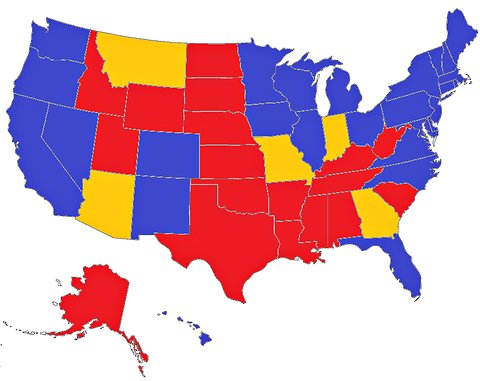 About the opposite would happen if Mr. Romney led nationally by 9 points — his current advantage among men. He would be all but certain to win states with a total of 321 electoral votes, and would be highly competitive in traditionally blue-leaning states like New Jersey, Oregon, and Washington. 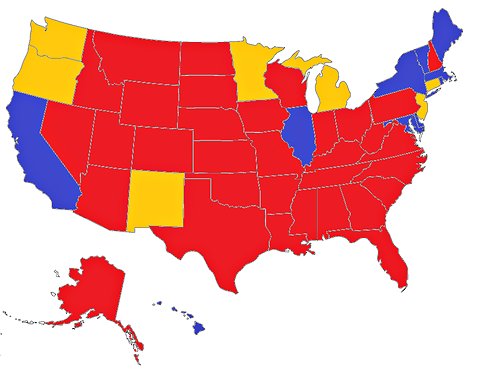 The large gender gap comes despite the fact that men and women’s economic roles are becoming more equal — according to the Bureau of Labor Statistics, women represented 47 percent of the labor force as of September — and that women suffered at least as much as men in the recent economic downturn.

The unemployment rate among women was 7.5 percent as of September — up from 7.0 percent when Mr. Obama took office in January 2009.

The unemployment rate among men is higher — 8.0 percent as of September — but it has declined rather than increased since Mr. Obama took office. It had been 8.6 percent in January 2009, and peaked at as high as 11.2 percent later that year.

This suggests the gender gap instead has more to do with partisan ideology than with pocketbook voting; apart from their views on abortion, women also take more liberal stances than men on social issues ranging from same-sex marriage to gun control.

Presidential candidates have faced increasing pressure to align with the bases of their parties on social issues. Mr. Obama reversed his previous position to support same-sex marriage this year. Mr. Romney has long since abandoned a number of moderate stances he took on social issues as governor of Massachusetts, when he said he supported abortion rights. So long as the ideological gap between the parties grows, the gender gap may grow as well.