While President Obama’s lopsided support among Latino and other minority voters has been a focus of postelection analysis, the overwhelming support he received from another growing demographic group — Americans who identify as gay, lesbian or bisexual — has received much less attention. 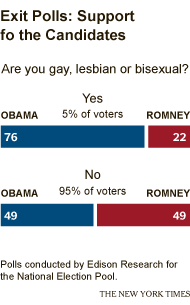 But the backing Mr. Obama received from gay voters also has a claim on having been decisive. Mitt Romney and Mr. Obama won roughly an equal number of votes among straight voters nationwide, exit polls showed. And, a new study argues, Mr. Romney appears to have won a narrow victory among straight voters in the swing states Ohio and Florida.

Mr. Obama’s more than three-to-one edge in exit polls among the 5 percent of voters who identified as gay, lesbian or bisexual was more than enough to give him the ultimate advantage, according to the study, by Gary J. Gates of the Williams Institute at the U.C.L.A. School of Law, in conjunction with Gallup.

Read more in the politics section.