A poll from CNN this week is the latest to show a majority of Americans in favor of same-sex marriage, with 51 percent saying that marriages between gay and lesbian couples “should be recognized by the law as valid” and 47 percent opposed.

This is the fourth credible poll in the past eight months to show an outright majority of Americans in favor of gay marriage. That represents quite a lot of progress for supporters of same-sex marriage. Prior to last year, there had been just one survey — a Washington Post poll conducted in April 2009 — to show support for gay marriage as the plurality position, and none had shown it with a majority.

As we noted last August, support for gay marriage seems to have been increasing at an accelerated pace over the past couple of years. Below is an update to the graph from last year’s article, which charts the trend from all available public polls on same-sex marriage going back to 1988. 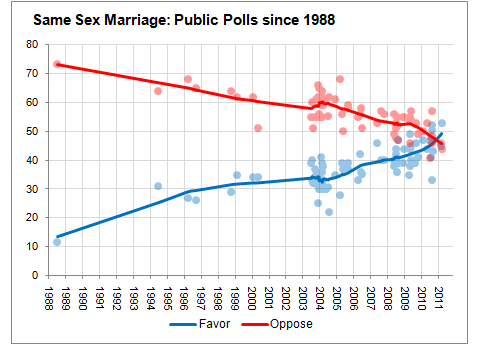 The trendline — derived through regression smoothing — estimates that about 50 percent of Americans now support gay marriage and that 46 percent are opposed, with a small percentage of voters undecided. By contrast, at this time two years ago, the numbers were 42 percent in favor and 53 percent opposed, according to the same technique.

The change — about a 4 percentage-point shift in favor of gay marriage in each of the last two years — is about double the longer-term rate of progress for supporters of gay marriage, which has been between 1 and 2 percentage points per year.

There is a margin of error associated with the calculation of the trendline, so it is too soon to say with confidence that support for gay marriage has become the plurality position (let alone the majority one). Other polls — like a Pew survey released in March — continue to show opinion split about evenly.

However, opponents of gay marriage almost certainly no longer constitute a majority; just one of the last nine polls has shown opposition to gay marriage above 50 percent.

Both the California and Maine results were close, and because opinion is shifting so quickly on the issue, the outcomes would probably be different if they were voted on again today. At the same time, the people who turn out to vote are considerably older than the population as a whole, so gay marriage will not perform quite as well at the ballot booth as in surveys of the general population. In addition, whenever a position is gaining ground, its newly won support is often tentative and can be peeled away by an effective counter-campaign.

But Republican candidates, who have placed less emphasis on gay marriage in recent years, probably cannot expect their opposition to it to be a net electoral positive for them except in select circumstances. If support for gay marriage were to continue accelerating as fast as it has in the past two years, supporters would outnumber opponents roughly 56-40 in the general population by November 2012.

Past trends, of course, are no guarantee of future ones, and it’s always possible that the momentum toward increasing support for gay marriage could flatten out or even reverse itself.

But this does put Republicans in a tricky position. Their traditional position on gay marriage is becoming less popular. But to the extent they disengage from the issue, they may lose even more ground. One way to read the trends of the past few years is that we have passed an inflection point wherein it is no longer politically advantageous for candidates to oppose same-sex marriage, which in turn softens opposition to it among the general public, creating a sort of feedback loop and accelerating the trend.