The Argentine Senate voted 33-27 last Thursday to allow same-sex marriage, making Argentina the first Latin American country to provide full marriage equality. The House of Deputies had already passed the bill (by a vote of 125-109), and President Cristina Fernández de Kirchner will sign it on Wednesday.

As Nate’s graph shows, the number of countries allowing gay marriage is slowly but steadily ticking upward. No longer is it unique to the stereotypically liberal Benelux and Scandinavian countries. Spain, Portugal and Argentina–Catholic countries with histories of right-wing, military dictatorships–now permit gay couples to wed. Polls show 70% of Argentines favoring the new law.

The most obvious implication of Argentina’s law is that gays and lesbians will marry and adopt children. But as with everything in Argentina, there are also baser political implications. President Fernández was a strong backer of the marriage bill, but had come late to the issue. Her critics pointed out that she showed little interest in same-sex marriage when her party still controlled the Congress, and may have had ulterior motives for pushing it now.

The president and her husband, former President Néstor Kirchner, are so polarizing that normal partisan divides in the Congress have given way to pro-Kirchner and anti-Kirchner blocs. The Front for Victory (FpV), the Kirchners’ wing of the Justicialist (Peronist) Party, lost control of both houses last year to a broad coalition of dissident Justicialists, the liberal (in the European sense) Radical Civic Union (UCR), social democrats and traditional conservatives.

Same-sex marriage was a wedge issue that split the opposition, and the Kirchners hope to exploit these fissures for future electoral gain. Fernández was assisted by some dissident Justicialists, including Senator (and former President) Carlos Menem, a social conservative, who abstained rather than vote no. 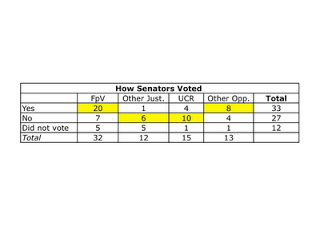 By portraying herself as the champion of progressive social values, President Fernández hopes to appeal to wealthier, socially liberal voters in metro Buenos Aires, who largely abandoned the FpV in the 2009 midterms. This self-portrayal got a tremendous boost from the Catholic Church, which was the most vocal opponent of gay marriage. The archbishop of Buenos Aires, Cardinal Jorge Bergoglio, called the bill the devil’s work, and organized a mass demonstration in opposition. Opponents argued that this was an example of Buenos Aires imposing its decadent, city values on the “real Argentina” of farms and villages. (Sound familiar?) The opposition also made an appeal to the children: Catholic schools in Buenos Aires dismissed pupils early the day before the vote, and encouraged them to rally at the Capitol in favor of “one mom and one dad” families.

This overt ecclesiastical pressure probably backfired. Argentina is a secular state, and past Church interference in civic affairs has bred a strong current of anti-clericalism. As in Spain, the Church hierarchy has been tainted by its complicity in the repression of dissidents under the former military regime. (Many individual priests and nuns, however, preached resistance through Liberation Theology.) Having Cardinal Bergoglio as the frontman for opposition to gay marriage conjured up these bad memories.

Thus, the vote in the Senate became not only a question of whether to allow same-sex marriage, but also of whether the civilian government could make decisions without Church interference. This rigged the deck in the Kirchners’ favor. While the vast majority of Argentines self-identify as Catholic, only a quarter report attending any weekly religious services–a rate considerably lower than in some other countries that allow same-sex marriage. 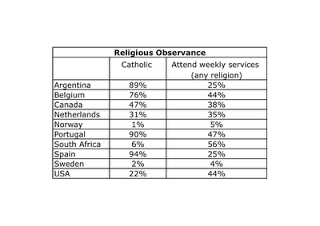 Because Catholic identity in Argentina is so broad yet so shallow, it is generally counterproductive to make religious appeals for or against a particular political issue. This is in contrast to the US, where high religious diversity is matched by high religious observance, and each religious community is a political interest group. (Catholic bishops probably have more influence over the US Congress than Argentina’s.) The testimonies of actual gay and lesbian families won out over appeals to hypothetical family values.

In the end, the Kirchners’ gambit paid off. While it remains to be seen whether they gain or lose anything from this legislation, they have recently enjoyed a resurgence in opinion polls. Thanks to their pushing, Argentina showed its socially liberal side, and Nate’s rainbow graph got another, 40-million-person bar.