In 1979, the Boston Bruins, facing the Montreal Canadiens in Game 7 of the Stanley Cup semifinals, had a one-goal lead with 2 minutes and 34 seconds to play in the third period. But then the Bruins were whistled for a bench minor during a sloppy shift change — too many men on the ice. You can probably guess what happened next. Canadiens’ legend Guy Lafleur scored on the ensuing power play to tie the score. The Canadiens won in overtime.

The Bruins fired their outspoken coach, Don Cherry, after the season. Cherry coached the next year for the Colorado Rockies. After they finished dead last in the NHL — their slogan had been, “Come to the fights and watch a Rockies game break out!” — CBC hired Cherry as a broadcaster. His “Coaches’ Corner” segment debuted the next year and has aired on CBC ever since. Cherry is so legendary to fans of “Hockey Night in Canada” that he was once voted the seventh-greatest Canadian of all time. Alexander Graham Bell finished ninth in the same poll. Wayne Gretzky finished 10th.

Cherry — if you’ve never seen him — has a populist sensibility that seems to appeal to the same part of the Canadian psyche as Toronto’s crack-smoking mayor, Rob Ford.1 And like Ford, he isn’t much of a stickler for the rules. He loves physical hockey and hates ticky-tack penalties, like the one the Bruins got in Montreal 35 years ago.

But Cherry’s experience in 1979, as much as it altered the course of Canadian and Canadien history, was more the exception than the rule. Usually in Game 7s, referees let an awful lot go and call far fewer penalties than they do in the regular season or the rest of the playoffs. Game 7s are very good environments for the physical hockey teams that Cherry likes best.

Case in point: the 2010-11 Bruins, who won Boston its first Stanley Cup since 1972. In those playoffs, the Bruins became the first-ever NHL team to win three Game 7s. The Bruins were a penalty-prone team, finishing third in the league in major penalties and eighth in penalties overall. They benefited from referees swallowing their whistles in those three Game 7s; just 18 penalty minutes were called in those games, including no penalties at all in the Bruins’ conference finals win against the Tampa Bay Lightning. 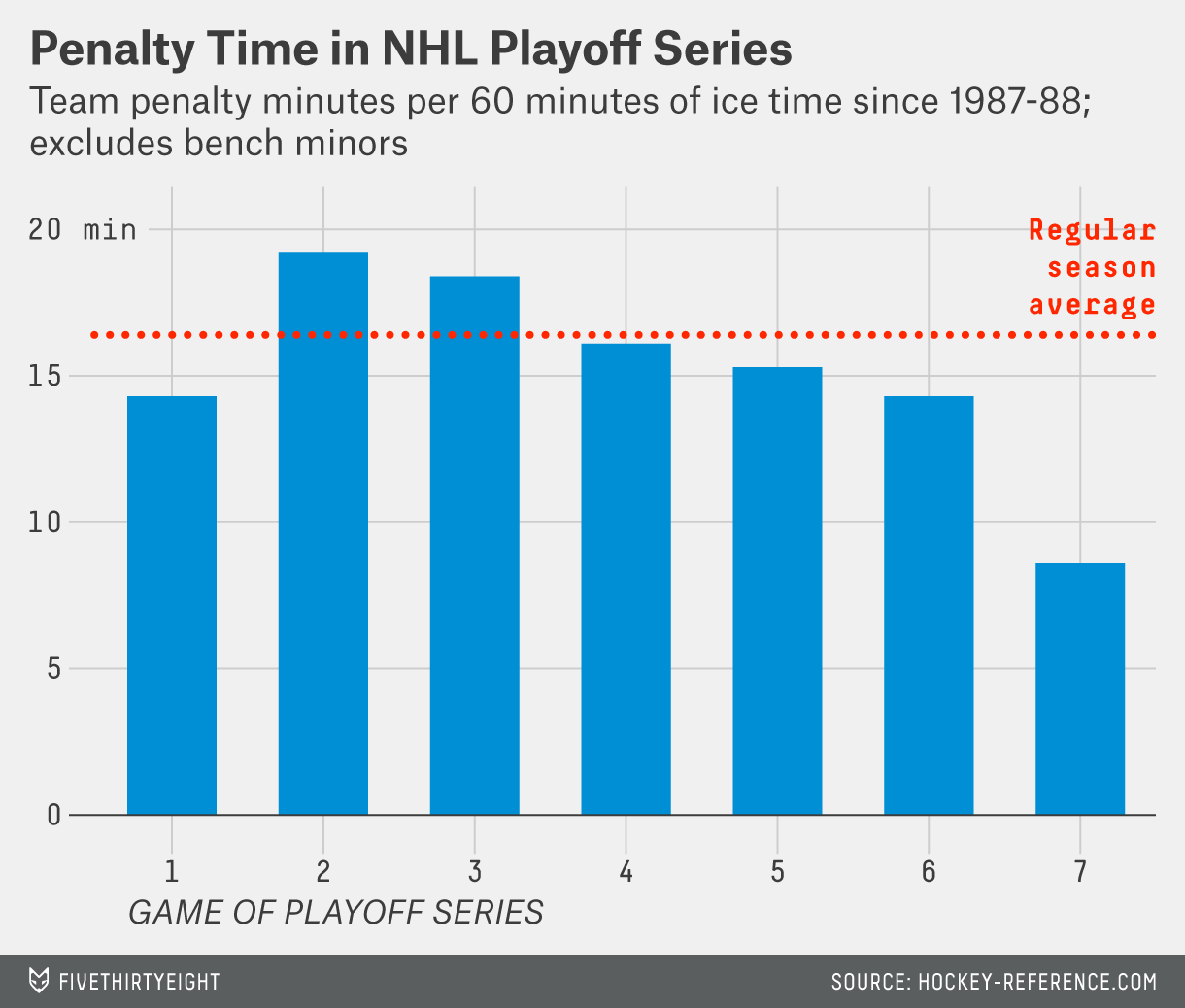 It’s unlikely that this is a fluke. Game 7s, like the one the Bruins and the Canadiens will play Wednesday and the New York Rangers and Pittsburgh Penguins will play Tuesday night, are a special treat. But there have been more than 100 of them since 1988, making for a reasonably large sample. Furthermore, there is evidence from baseball, basketball and other sports that officials are prone to passivity with more on the line. About 20 percent of power plays result in goals, both in the regular season and in the playoffs.

But it’s easy to blame the refs. Is it possible that the players — as opposed to the officials — are doing something differently in Game 7s?

Not in a way that would explain the discrepancies in the data. The NHL now keeps track of body checks, or hits. In Game 7s since 2009, teams have averaged 28.7 hits per 60 minutes of ice time. That’s a tiny bit lower than the rate in the first six games of the playoffs, which is 30.2 hits per 60 minutes. But it’s much higher than in the regular season, when teams average 22.2 hits. The playoffs are considerably more physical, and Game 7s are typical of the playoffs.

It is true that teams get into fewer fights during the playoffs. Since 1997-98, teams have been called for 0.8 minutes’ worth of major penalties per 60 minutes of ice time in the playoffs, as compared to 2.7 per 60 minutes in the regular season. Major penalties generally mean fighting majors, so that can be taken to mean that fights are only about one-third as common in the playoffs. Perhaps there are fewer fights in Game 7 than during the rest of the playoffs — I don’t have that data handy. But fighting majors are so rare in the playoffs to begin with that they can’t account for much of the drop-off in penalty minutes in Game 7s compared to the rest of the series.

Incidentally, there are more misconduct penalties called in the playoffs than during the regular season, and this trend has been especially pronounced during the past five years or so. For those of you who aren’t familiar with misconducts, they’re penalties that rule a player off the ice for either 10 minutes or the rest of the game, depending on the severity of the infraction. However, unlike major and minor penalties, they don’t give the other team a power play (although misconducts are usually called in conjunction with major or minor penalties). Thus misconducts, along with fines and suspensions from the league office, may serve as an attractive solution for officials. They serve a deterrent effect without having quite as much of a direct impact on the game as fans see it.

But by Game 7, referees drop all pretense of calling the game as they usually would, despite the action remaining highly physical.

Which teams might benefit from this? The next chart lists the net number of goals scored by each remaining playoff team during special-teams situations (power plays and penalty-kills; the totals include short-handed goals). The higher a team ranks on this list, the more it stands to lose from a drop-off in penalty calls. Conversely, the teams low on the list would prefer more even-strength play. 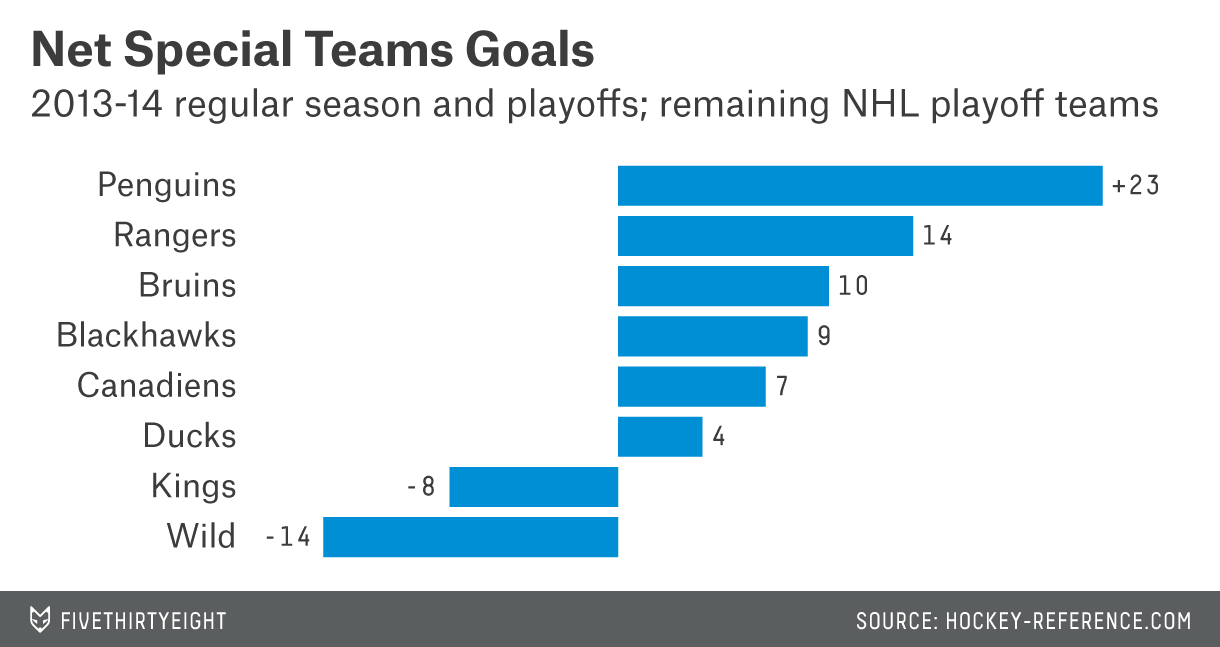 The Penguins and the Rangers ranked first and third among NHL teams for net special-teams goals during the regular season. The Rangers’ power play has been awful in the playoffs so far, but that’s probably just a function of a small sample size. Still, they probably won’t mind a game with fewer penalties, especially since the Penguins’ power play is so deadly. On the other hand, the Rangers are more of a finesse than a power hockey team, so it’s not likely that they’ll just be able to check Sidney Crosby into submission, even with laxer officiating.

If there’s a team that could benefit from the Game 7 officiating style, it could be the Los Angeles Kings. The Kings led the league in hits during the regular season, and while they avoided fighting majors, they had the fourth-highest number of minor penalties in the league. They also have an anemic power play and just an average penalty-kill, which made them net-negative in special-teams goals during the regular season.

Don Cherry is still an unabashed Bruins fan, but the Kings fit his style the best, avoiding blatant cheap shots but otherwise pushing the limits of legal play. If they beat the Anaheim Ducks tomorrow to advance to a Game 7, they might have better luck than Cherry did.