Fresh numbers in from Gallup show Barack Obama emerging with a 6-point lead over his Republican rival. 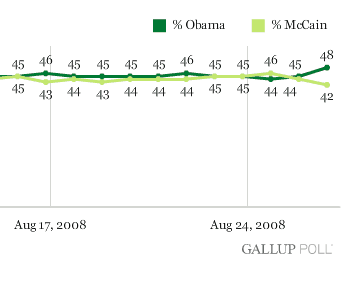 Rasmussen does not yet show a discernible bounce — their poll still has the race tied. But they also hint that, based on a review of their day-by-day results, an Obama bounce may be coming:

Reviewing recent single-night polling data—rather than the three-day average–shows that Obama lost ground immediately following the selection of Joe Biden as his running mate. That had little or nothing to do with Biden and everything to do with the fact that the running mate was not named Hillary Clinton. The impact of that choice was reflected in the polling results released Tuesday and Wednesday showing modest gains for McCain.

However, events are moving rapidly this season and the impact of the convention is starting to replace the impact of the Vice Presidential announcement. New polling data shows that 74% of Democrats say their convention has unified the party and 84% believe Hillary Clinton’s speech will help Obama in the fall.

Obama’s poll numbers have improved over the past couple of nights and today’s update shows a tie race because it includes a mix of both recent trends. But it seems likely that Obama will end the convention with a modest lead over McCain. Then, of course, it will be time for the Republican Vice Presidential pick and, next week, the GOP convention.

A quick note: the conventional wisdom is that firms that weight by party ID, such as Rasmussen, will tend to show less of a convention bounce than those that don’t, since some of the purpose of a convention is to sell the brand of the party rather than the candidate, which may result in short-term (and presumably short-lived) shifts in party identification.

Still, Obama has to be feeling pretty good about those Gallup numbers, as one-third of the interviews in their current sample are effectively pre-convention (conducted on Monday before Michelle Obama’s speech), and essentially none of them will reflect either Bill Clinton and Joe Biden’s speeces yesterday nor Obama’s performance at Invesco Field tonight.