Earlier today, Gallup released the first poll (that I know about) of attitudes toward the new Arizona immigration law. About three in four Americans have heard of the law, and among them 51 percent support the law, 39 percent oppose it, with the remainder having no opinion.

The partisan splits are as expected: Of those who have heard of the law, self-identified Republicans overwhelmingly support it, 75 percent to 17 percent; Democrats oppose it by a solid but smaller margin, 56 percent to 34 percent; and Independents support it slightly, 50 percent to 39 percent–essentially mirroring the overall national numbers.

I’m not particularly surprised by these numbers. What we don’t know yet is what the meaning or origins of citizen support or opposition is–specifically why Americans who support the Arizona law support it, and vice versa for those who oppose. What do I mean by that? 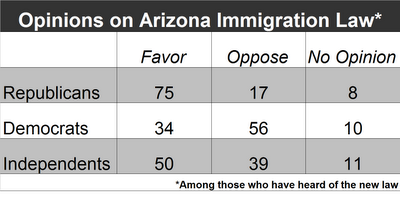 For starters, immigration–legal and especially illegal–is a serially unaddressed issue in the United States. Illegal immigration is often permitted with a look-away attitude, and limits on the number of legal immigrants only compounds the problem. Moreover, both parties are cross-pressured to the point of near-paralysis: The Republican coalition includes a core of strident anti-immigration activists, but also business interests generally happy to benefit from a cheap and largely powerless immigrant labor force; Democrats have a vested political interest in keeping critical Latino voters in their coalition happy, but have to guard against looking soft on the issue and tolerant of law-breaking. This is why there is, so far, far more talk than action. Too many politicians in both parties would prefer to drop back and punt on first down, play rhetorical games, or point the finger of blame at the other party.

Which brings me back to my earlier point about the origins of support for the Arizona law. Let’s presume for a moment that most Americans have a vague sense of what the law does, and have perhaps speculated a bit about potential problems or unintended consequences. Certainly some of these supporters harbor xenophobic attitudes rooted in a fear about job pressures caused by immigrant labor, or the cultural shock of Spanish-language ATMs or advertisements. But that cannot possibly explain all the supporters (or even all Republican-identifying supporters). Though many Americans live in areas where immigration controversies are impossible to ignore–Arizona, of course, sits squarely in the region of the country most affected–many Americans do not.

What I suspect further polling will reveal is that a significant element of public support derives from a general empathy and encouragement Americans want to express toward Arizonans for doing something–anything–in the face of Washington’s continued foot-dragging. This is essentially the point–or, rather, one of the points–the highly-controversial Arizona anti-immigration icon Sheriff Joe Arpaio made this week: If nothing else, Arizona’s actions now force Washington’s hands. But that does not necessarily mean Americans favor rounding up and/or profiling people for deportation, or that they are xenophobic racists. Instead, some of them surely are tired of and frustrated by inaction on the national level, of more talk than action–and they approve of the fact that Arizona this week sent a shot across Washington’s bow, which it undoubtedly did.