There has been various circumstantial evidence that the public’s dissatisfaction with the performance of Congress, particularly during the debt ceiling debate, could threaten the Republican majority in the House of Representatives. Disapproval ratings for the Congress are at record highs, as are disapproval ratings for the Republican Party. Other polls show record numbers of Americans saying that their representative should not be re-elected, that most members of Congress should not be re-elected, or both.

What we haven’t had, however, are polls comparing Democrats against Republicans in a direct way. That’s why the poll that Gallup published Friday ought to concern Republicans. It shows a 7-point Democratic advantage on the generic Congressional ballot — meaning simply that more Americans told Gallup they plan to vote for a Democrat for Congress next year. Although the generic ballot is a crude measure, it is probably the best macro-level indicator of the direction that the House is headed in.

Last year, Republicans won the popular vote for the U.S. House — essentially what the generic ballot is trying to measure — by 7 percentage points. So a poll showing Democrats 7 points ahead instead is a pretty significant swing.

But does it mean that Democrats are now favorites to take over the Congress next year?

No, not exactly. Instead, it points toward control of the House being more or less a toss-up. There are three structural issues that Democrats will have to contend with that take a little bit of the sheen off this poll.

This very probably has to do with the incumbency advantage. Other factors held equal, first-term members of the House of Representatives tend to over-perform their vote share from the previous cycle as they can exploit the various tangible and intangible advantages that their newly-won incumbency provides them with — a phenomenon known as the sophomore surge. So, if you’re a House Republican running for re-election for the first time, the hope is that the sophomore surge cancels out the shift in the partisan climate toward Democrats.

Second, Democrats are increasingly becoming an urban party, and urban voters are easier to pack into compact districts where Democrats will win by huge majorities, wasting votes that could help them in swing districts elsewhere on the map.

This problem will potentially be compounded for Democrats this year by redistricting. Redistricting, although it has complex effects, will tend to shore up some incumbent Republicans precisely in this scenario where Democrats win the House popular vote, but not by an overwhelming margin.

We can do a creditable job of accounting for these first two structural issues by performing a regression analysis, which seeks to explain the number of seats that Democrats won in the House in each election since World War II based on four factors: the margin in the House popular vote in that election, the margin in the House popular vote in the previous election, the number of seats Democrats held before the election, and a time trend to account for the urbanization of Democratic voters.

The regression analysis makes the following predictions for the number of seats that Democrats will win in the House next year based on various results in the House popular vote: 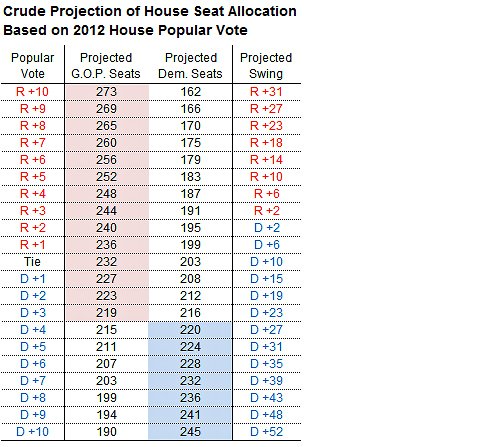 If the House popular vote were to be a tie next year, Democrats would pick up a few seats — but very probably not enough to win the majority from Republicans. Instead, the model projects a net gain of 10 seats from Republicans, similar to the 9 seats that Democrats gained in 1996.

In order to have even odds of actually taking over the House, instead, Democrats would probably need to win the House popular vote by somewhere between 3 and 4 percentage points.

A 7-point win in the House popular vote would probably get the job done for Democrats: the model projects that they’d win 39 seats in this scenario.

But, here is the third issue that Democrats face: this is a poll of registered rather than likely votes. That is probably as it should be, since shifts in voter enthusiasm can be quite ephemeral and are hard to predict 15 months in advance of an election.

Nevertheless, once likely voter polls become more reliable and start taking the place of registered voter polls, this is more likely to hurt than help Democrats’ numbers. In years where the Democratic Party has relatively strong turnout, such as in 2006 or 2008, they generally perform about the same in polls of likely voters as in polls of registered voters. On the other hand, in 2010, a bad year for Democratic turnout, there was an “enthusiasm gap” of about 6 percentage points working against Democrats — which means that a 7 point advantage on the generic ballot among registered voters would translate to just a 1-point advantage among likely voters, probably not enough for Democrats to take back the House. 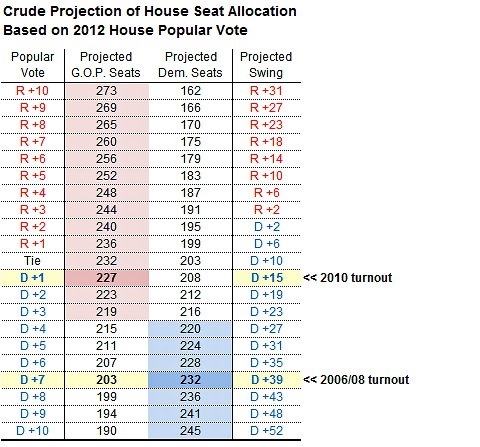 So the bottom line is this: the Gallup poll indicates a pretty substantial shift in the partisan climate. But whether not it will be enough for Democrats to take over the House will depend on turnout. A turnout scenario like 2010 would not get the job done for Democrats, while 2008-type turnout very probably would. Some in-between scenario like 2004 (which is perhaps the most likely case) would make control of the House a coin flip.

Of course, we’ll want to see whether Gallup’s figure is confirmed by other pollsters — as well as how the numbers change over the course of time.

Still, this is a pretty encouraging sign for Democrats — coming, interestingly enough, at a time when President Obama is achieving his lowest-ever approval ratings in many polls. We’ll have another post up discussing the potential for this “double switch” next week — a Republican president plus a Democratic House — but it has become a tangible possibility (I would estimate the chances as being somewhere between 10 and 20 percent).

Republicans, meanwhile, will have to decide whether their hard bargaining strategy — which has produced some policy wins for the party while also making Mr. Obama’s job more difficult — is worth the price of potentially losing their majority in the House.

It was at roughly this point two years ago, in August 2009, that the generic Congressional ballot began to show a Republican lead. Republicans continued to expand upon it over the next year and a half as they campaigned against the unpopular Democratic Congress. If we’re on a parallel course this year, and voter sentiment continues to shift against Republicans in Congress, we’ll have yet another wave election.