Nobody would dispute that the 240 Republicans who serve in the House of Representatives are a conservative bunch. A big part of the story are the 85 Republicans — roughly one-third of the caucus — who are serving in Congress for the first time, or who are doing so after having lost or retired from their seats previously. Because of them, the Republican caucus has continued to drift toward the right despite now occupying most of the swing districts in the country, which are normally fertile ground for moderates.

According to the website ProgressivePunch.org, an objective system to rate members of Congress from liberal to conservative based on their voting records, these 85 first-term Republicans have adopted the liberal position on votes in Congress an average of just 6.8 percent so far this year. By comparison, the 155 Republicans who are holdovers from the previous Congress have done so 7.5 percent of the time.

Put more succinctly, first-term Republicans are considerably more conservative, relative to their districts, than those who also served in the 111th Congress.

This is perhaps best demonstrated visually. In the graphic below, I’ve plotted the ideological positions of the 240 House Republicans against the partisanship of their district as rated by the Partisan Voting Index. Ideology is measured by a version of ProgressivePunch.org’s statistics, which I call the Conservative Score. This simply takes ProgressivePunch.org’s Progressive Score for votes so far this year and inverts it — so a member who takes the liberal position 5 percent of the time would have a Conservative Score of 95. 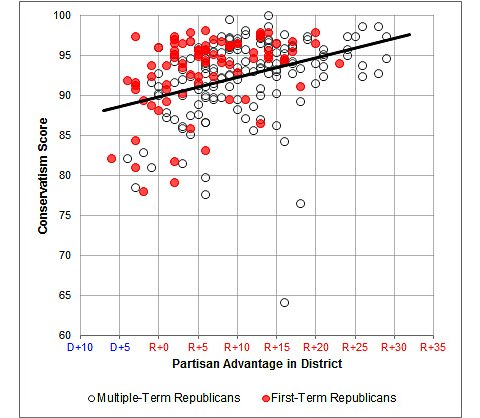 What I want to draw your attention to, however, is the difference between first-term Republicans, who appear in red in the chart, and the holdovers, who appear in black-and-white. About four-fifths of freshman Republicans are above the regression line, which is formed from the scores of the returning members. Essentially this means that 80 percent of the first-termers are more conservative than you’d “expect” based on knowing how the veteran Republicans are voting.

Through regression analysis, we can determine that the trend is highly statistically significant. (This is also true, incidentally, even if you also account for membership in the Tea Party Caucus.) Although first-term Republicans, like returning members, are somewhat sensitive to the partisanship of their districts, they are nevertheless more conservative across the board once you’ve accounted for it.

There are a couple of fairly straightforward theories to explain this. First, the first-term Republicans were elected in an environment in which the party won 51.6 percent of the national popular vote for the U.S. House. By comparison, the returning members were elected in environments when Republicans had an average of about 47 percent of the popular vote.

The other factor, however, is that conservative Republicans have not yet had to defend their seats. Some of the gains they made this year may prove to be ephemeral.

Consider the last time that Republicans made gains of this magnitude, which was in 1994. That year produced 73 freshman Republicans in the House of Representatives.

How many of those 73 freshmen are still serving in the House today? Only 7 of them. By comparison, there were just 13 freshmen Democrats elected that year. But 6 of the 13 are still serving. The reason for the discrepancy is that any Democrat elected in 1994 probably had to be a very strong politician, whereas many Republicans were elected simply by virtue of having an (R) next to their name.

Likewise, 19 of the 42 Democrats elected to the House for the first time in the Democratic wave year of 2006, or almost half, no longer occupy their seats, despite having had just two elections since then.

The mistake that a lot of first-term members of Congress can make is to assume that electoral environment from which they were elected is one that will persist indefinitely. Most freshmen Representatives aren’t likely to have developed particularly strong constituent services, or to have acquired positions of power within the Congress. These are the kinds of things that help a member get re-elected when the political environment becomes more challenging, as it inevitably will get sooner or later.

But those who stake out ideological positions that are out of step with the voters in their district are liable to be especially vulnerable. Political scientists generally agree that there is a relationship between the ideological views of a Congressman and the share of the vote he tends to get in subsequent elections, with more extreme and partisan members having a higher bar to clear.

So something very probably has to give for the Republicans. Even if the public has become somewhat more conservative on fiscal issues, something which I suspect is true, it is not nearly to the degree reflected in the representation in Congress.

The two most plausible paths are as follows. First, Republicans in Congress will maintain their present course toward more and more conservative views. There will be yet another wave election but this time one that breaks against them, whether in 2012, 2014, 2016 or some combination thereof. One of the more likely scenarios, for instance, is that a conservative Republican like Rick Perry is elected president in 2012 along with a Republican Congress. But the economy continues to sputter, as it often does for as many as 5 to 10 years after a financial crisis. In that case, Democrats might win back 50 or 60 or (who knows) 70 or 80 seats in 2014.

A second scenario is that the Republicans show a little bit more willingness to compromise. Perhaps not a lot, but enough so that the public decides to give both the House Republicans and President Obama another go. This is essentially what happened after 1994: although Republicans in Congress shifted to the right that year, as they have this year, they nevertheless reached a number of bipartisan compromises with President Clinton, and the parties continued to share power.

There also might have been a third path, but it seems exceptionally unlikely to be pursued. When Democrats won overwhelming numbers of seats in Congress during the Great Depression of the 1930s, the Democratic Party itself actually shifted substantially toward the right relative to where it had been previously. But policy shifted substantially toward the left because the Democrats controlled the center, leaving Republicans to be little more than a fringe party. In fact, although there were often substantial regional disputes — Northern and Southern Democrats substantially differed on social policy while generally agreeing on economic policy — Democrats dominated the Congress for the next 60 years.

More on this in a subsequent post, in which we’ll look at the current positioning of the Republican Congress relative to other points in American history. But a bit of a teaser: there is some evidence to suggest that the current House of Representative may be the most conservative ever on economic policy, and the furthest removed from the center of the electorate.