I don’t know that I’d make too much of this, but tracking the Congressional Democrats’ approval ratings in Quinnipiac polling over the past six months — they’re now down to just 28 percent overall, including 19 percent (!) among independents — is interesting in this respect. Both times that the Congress approved a health care bill — the House on November 7th, the Senate on December 24th — the Democrats got a bounce from among their own voters without suffering any further harm from Republicans and independents. Meanwhile, the Democrats’ approval rating has sunken to a new low among all three groups in Quinnipac’s latest poll after three weeks of inaction on health care reform, which most voters no longer expect to pass. 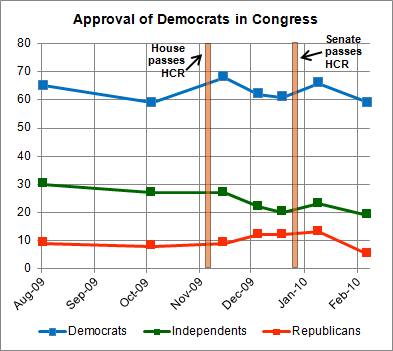 Gallup has also found a very sharp drop in Congressional approval among Democrats since Scott Brown’s election, although they don’t elucidate whether those Democratic voters are mad at the Democrats in Congress, the Republicans, or pretty much everyone.

The near-term political case for passing health care, again, is not that the bill is magically going to become popular over the next eight months. Rather, it’s that the Democrats are already in such bad shape among independents — partly, no doubt, because of their bungled handling of what has become an unpopular health care bill — that they may as well go ahead and give their base something to get excited about. Seriously, the Democrats’ approval rating among independents in 19 percent. What more do they have to lose?